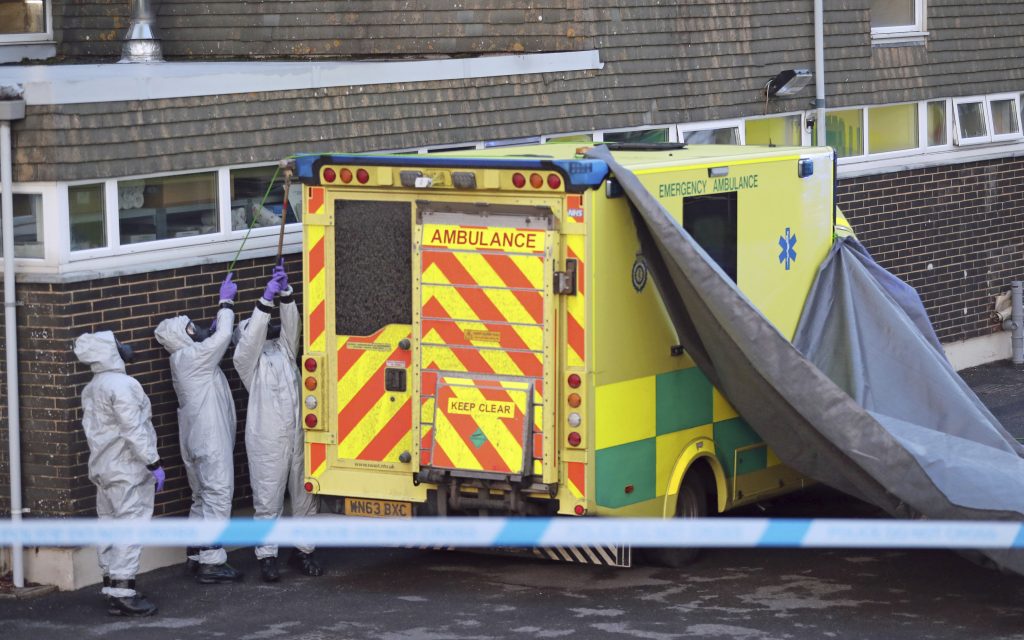 British media reported Sunday that traces of the nerve agent used to attack a Russian ex-spy and his daughter have been found in Salisbury where the two were poisoned.

BBC said its sources say traces were found at a restaurant where Sergei Skripal and his daughter Yulia reportedly ate before falling critically ill. BBC also reported that up to 500 people who dined at the restaurant have been told to wash their possessions as a precaution. Sky News says traces were found in several locations.

A large-scale police investigation is underway in Salisbury as forensics experts wearing protective gear search for clues. Among the sites they are searching are the Zizzi restaurant, which is closed to the public, and the gravesites where Skripal’s wife and son are buried. Skripal’s house has also been extensively searched for clues and traces of the nerve agent.

Home Secretary Amber Rudd said Saturday evening it is still “too early” to determine who is to blame for the attack. Senior government officials have vowed to respond robustly if the Russian government is found to be responsible.

Rudd said more than 250 counterterrorism officers are on the scene evaluating more than 240 pieces of evidence and interviewing about 200 witnesses.

They are backed by roughly 180 military personnel providing logistical support, including the removal of ambulances feared to possibly be contaminated by the nerve agent.

Police are looking for clues to what sickened Skripal, 66, a Russian ex-military intelligence specialist who in 2006 was convicted in Russia of spying for Britain, and his 33-year-old daughter, Yulia.

Skripal was imprisoned inside Russia until he was freed in a 2010 spy swap and settled in England. He had stayed out of the public eye since then.

The father and daughter were found unconscious March 4 on a bench in Salisbury. Skripal lived in the town, located 90 miles southwest of London.