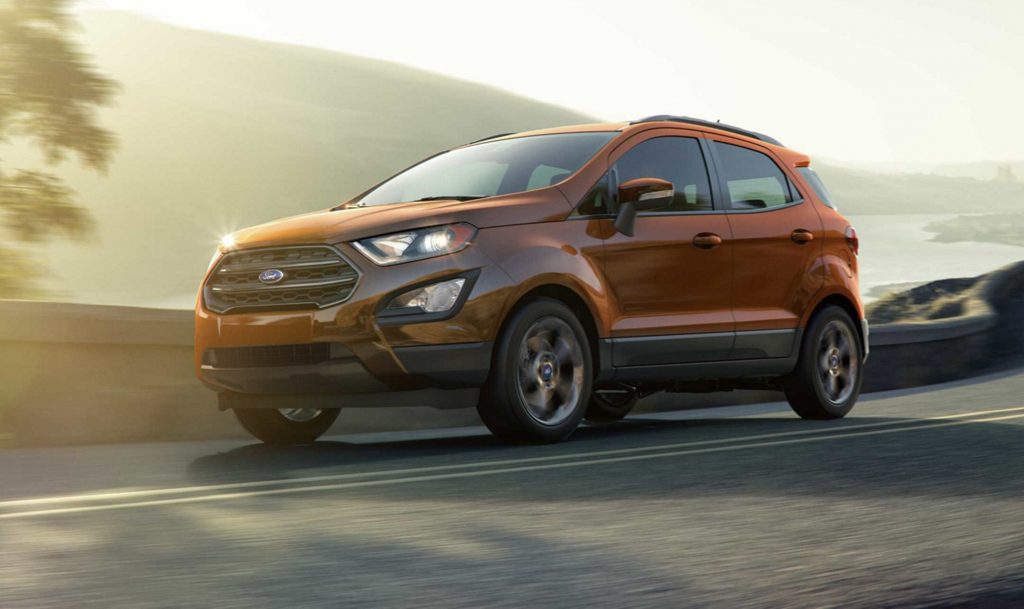 Ford is playing catch-up with the 2018 EcoSport subcompact SUV, but it’s a long way behind. The EcoSport just went on sale in the United States, but it’s a face-lifted version of an SUV Ford’s been selling in other parts of the world since 2012. Most of the competition is newer, with equipment that reflects it.

Clearly, subcompact SUVs were not Job 1 at Ford Motor Co. That’s somewhat understandable. They’re popular in other parts of the world, but sell in relatively small numbers in the U.S., where customer tastes lean toward compact and midsize SUVs like the Ford Escape and Explorer, respectively. Ford sold 308,296 Escapes in 2017, and 271,131 Explorers in the U.S. last year.

Among other subcompact SUVs, the Subaru Crosstrek sold 110,138 in 2017, the Jeep Renegade notched 103,434 sales, and the Chevy Trax, which may be the EcoSport’s most attainable competitor, notched 79,289.

Despite those modest numbers, subcompact SUVs are a meaningful class of vehicles.

Ford’s arrival so late to the party in its home market is indicative of the indecisive leadership that led to the company’s recent management turmoil.

Rating: Two out of four stars

It stickered at $26,080. All prices exclude destination charges.

EcoSport prices are in the middle of its competitive set.

Ford builds the EcoSport at seven plants around the world. U.S. models come from Chennai, India.

The EcoSport is attractive. The model Ford’s been selling around the world got a nose job and other styling tweaks to make it look like the bigger, better-selling Escape this year. The modern three-bar grille and LED accent lights give it a substantial appearance. The overall look is consistent with other Ford SUVs, though the EcoSport’s small size becomes apparent in profile. At 161.9 inches long, and with a 99.2-inch wheelbase, it measures smallest in the segment. Nearly a foot shorter than a Ford Fiesta subcompact sedan, the EcoSport is incredibly easy to park.

The EcoSport’s 20.9 cubic feet of cargo space behind the rear seat and 50 with the seat folded flat are among the largest in the segment. Only the HR-V beats the Ford on both counts, and the Crosstrek is the only other to top 50 cubic feet with the seat down.

Ford’s research said buyers wanted phone compatibility, so a lot of work went into making the EcoSport’s interface. Sync voice recognition is standard, and all models but the base S have either a 6- or 8-inch touch screen to accommodate Apple CarPlay and Android Auto. Both of the touch screens have pinch and swipe functions.

The EcoSport’s greatest shortcoming probably lies in the safety features competitors offer that it doesn’t: Depending on the vehicle and model, you can find the following in other subcompact SUVs:

The EcoSport feels less refined than most of the competition. Interior noise is quite noticeable, both from the tires and engine. The steering doesn’t provide much feedback.

While the 8-inch touchscreen in my EcoSport Titanium is a nice touch in this class of vehicle, it did not respond as quickly as the best systems.

The 1.0L turbocharged four-cylinder engine’s 123 hp and 125 lb-ft of torque are the lowest output in the segment. There’s noticeable engine vibration at low engine rpm, and under hard acceleration for highway merges. The stop-start system that shuts the engine off at stoplights to save fuel felt a bit slower and more noticeable than leading competitors’.

The EcoSport’s EPA fuel economy rating falls in the middle of the pack. It scored 27 mpg in the city, 29 on the highway and 28 in combined driving.

The key combined figure matches the Trax, but trails the HR-V, Kona and Crosstrek. It beat the 500X and Renegade. Fuel economy ratings for the Nissan Kicks, which will only offer FWD, aren’t available yet.

The EcoSport could have established Ford as an early leader in the subcompact SUV market if U.S. sales began when it was new. Back then, features like a touch screen and Wi-Fi hotspot would have set the standard for the segment.

Hitting the market in 2018, the EcoSport feels like a placeholder, introduced to give Ford dealers an alternative to popular vehicles from other brands until the automaker introduces an all-new and fully competitive subcompact SUV in two or three years.