World FOCUS: Search Is On for the Best Summit Site for Trump, Kim
World 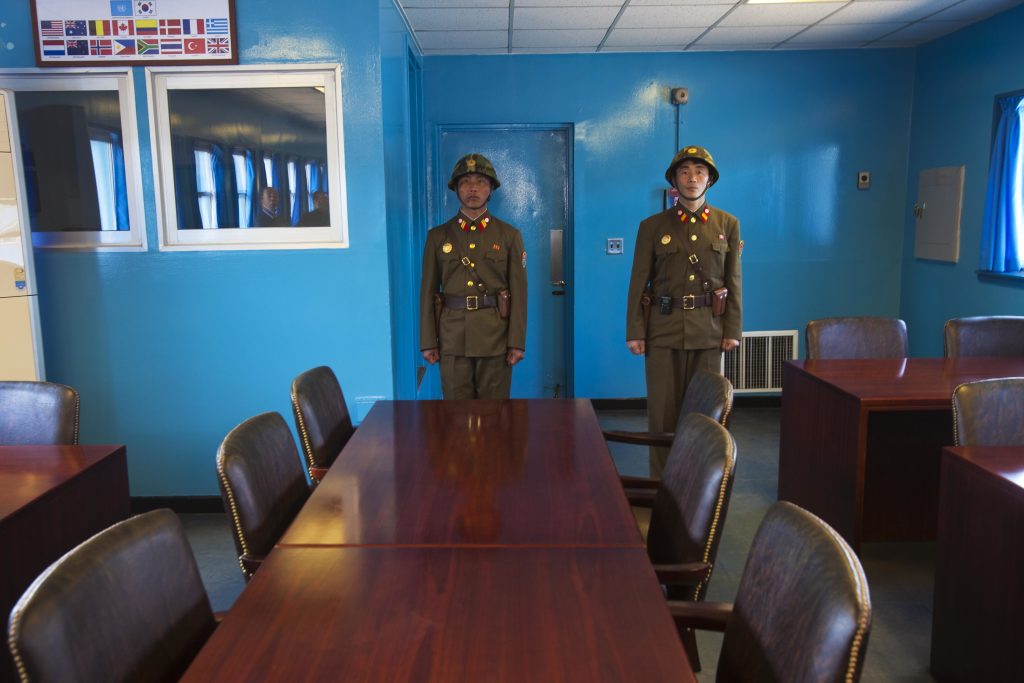 So where should President Donald Trump and Kim Jong Un meet up for the first face-to-face talks between a U.S. and North Korean president?

The Demilitarized Zone between North and South Korea is one possibility. Sweden has offered to help. And there’s always neutral Geneva, Switzerland.

Someplace in Asia perhaps — such as Beijing — hasn’t been ruled out. Nor, for that matter, has a ship in international waters.

The question crackled through diplomatic and government circles Friday, one day after a South Korean official announced in the dark on a White House driveway that the two heads of state who had threatened mutual obliteration for months would take a meeting.

It’s not clear what location is suitable for leaders who have sniped at each other — “Little Rocket Man” vs. “senile dotard” — in nerve-rattling Twitter exchanges about nuclear war.

“It’s all about optics, from their first handshake,” said Lisa Collins, a Korea scholar and fellow at the Center for Strategic and International Studies. “There are 70 years of historical baggage between the two countries … so to have the meeting in a place that’s a safe location and one that doesn’t overly highlight the differences between the two countries would probably be the best.”

The White House wasn’t offering suggestions in the hours after the announcement.

Trump, a former media star, understands well the value of “optics.” But symbolism, security and practicality also come into play. Holding talks in either the U.S. or North Korea seems unlikely. Traveling to North Korea risks conferring legitimacy on Kim and his country.

As for Kim, except for schooling in Switzerland and perhaps some vacations during that time, it’s not clear that he’s left North Korea. So Mar-a-Lago, the president’s Florida estate that was good enough for Chinese President Xi Jinping last April, probably won’t do this time.

More likely is the no-man’s land of Peace Village in the DMZ’s Panmunjom. There is a building there with a line through the middle that marks the border — and was the site of the 1953 armistice. Theoretically, Kim could shake Trump’s hand by reaching over the line without ever setting foot outside North Korea. And Trump’s been wanting to visit the DMZ, anyway. A shrouded-in-secrecy stop there during Trump’s tour of Asia last year was scrubbed due to bad weather.

In April, the leaders of North and South Korea are to meet there for their own historic bilateral talks.

Swedish Prime Minister Stefan Lofven, meanwhile, has offered to help, given that his nation has an embassy in Pyongyang. “We are a non-aligning country,” Lofven pointed out during a press conference with Trump this week. “If the president decides, the key actors decide if they want us to help out, we’ll be there.”

Sometimes, talks fail. In diplomatic circles, Reykjavik, Iceland’s frosty capital, refers to President Ronald Reagan and Soviet leader Mikhail Gorbachev’s hastily arranged arms reduction talks in 1986. They failed to produce a deal, but did result in iconic photos of the two leaders smiling together in the final years of the Cold War.

Other times, they blow up. “Peaceful coexistence” was the goal, but not the immediate result, of a summit in Paris between Khruschev and Eisenhower. The talks were tense over the Soviet downing of a U-2 plane in 1960 that Eisenhower was forced to admit had been spying on Russia. The Russian leader stalked out of the meeting, cooling any thoughts of a lasting peace for a while.

It’s good to have a backup venue: What were to be talks in 1989 between President George H.W. Bush and Gorbachev aboard a ship near Malta turned into the “seasick summit” when seven-foot waves forced the leaders to cancel some meetings.

Talks and the most powerful images sometimes go only so far. Egyptian President Anwar Sadat stunned the world when he set foot in Israel in 1977 and addressed the Knesset. The visit set the tone for the Camp David peace summit and treaty in 1979. The Egyptian-Israeli agreement has remained intact and laid the groundwork for other Mideast summits. But the peace process has stalled in recent years.