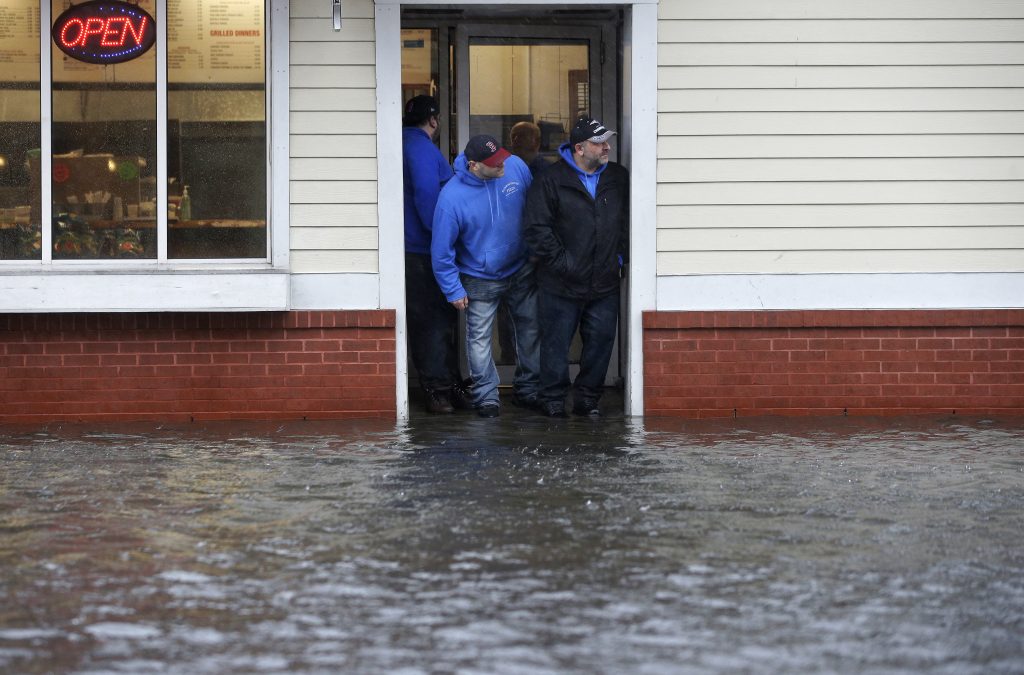 A major nor’easter pounded the East Coast on Friday, packing heavy rain, intermittent snow and strong winds as residents from the mid-Atlantic to Maine braced for coastal flooding.

More than 2,100 flights were canceled by airlines, most spread across airports in the Northeast. An American Airlines spokesman says the company has canceled 18 percent of its flights in the Northeast, with Boston’s Logan Airport and Reagan Washington National Airport the hardest hit. Amtrak is reporting track damage on one of its Washington D.C. lines.

The Eastern Seaboard was getting buffeted by wind gusts exceeding 50 mph, with possible hurricane-strength winds of 80 to 90 mph on Cape Cod. Also, heavy snow fell in Ohio and upstate New York as the storm spun eastward. Boston south to Rhode Island was forecast to get two to five inches of snow from the late-winter storm.

Powerful winds forced President Donald Trump to fly out of Dulles International Airport on Friday instead of Joint Base Andrews in Maryland, where Air Force One is housed. The airport in Northern Virginia has runways that are more closely aligned with the gusty winds that were kicked up Friday by the nor’easter. Trump flew to Charlotte, North Carolina, to attend the funeral of the Rev. Billy Graham.

The front edge of the storm dumped up to a foot of snow on northeast Ohio, with strong winds leading to power outages and school closings. Portions of New York also saw more than a foot of snow Thursday night.

“We’re expecting to see more severe flooding issues here than we did in the Jan. 4 storm,” when a nor’easter lashed the region with heavy snow and rain, he said.

The storm knocked out power to 500,000 residences and businesses from Michigan to North Carolina. In D.C. alone, more than 100,000 customers lost power. The Office of Personnel Management announced it would close all federal offices in the D.C. area for the day, while the Smithsonian museums also closed. Pennsylvania utilities report at least 65,000 outages in that state.

In Duxbury, south of Boston, officials urged people to evacuate as soon as possible, and the fire department was preparing to use a high-water rescue vehicle for the first time to help any residents stuck in homes amid high floodwaters.

In New Jersey, officials worried that the storm could take a chunk out of beaches just south of Atlantic City that are still being repaired because of damage from previous storms. Winds were expected to increase drastically throughout the day, peaking Friday afternoon with gusts from 50 mph to 60 mph that could leave downed trees and power lines. Almost 5,000 customers were without power.

Across the East Coast, authorities told residents of coastal communities to be prepared to evacuate, if necessary, in advance of high tides. The weather service said all of Rhode Island was under flood and high-wind watches through Sunday morning.

In Connecticut, college newspaper The Daily Campus is reporting that the University of Connecticut’s Agriculture Biotechnology Lab building was evacuated after high winds blew a smokestack on the roof.

The storm’s impact has been felt as far south as central Virginia’s Hanover County, where the Richmond Times-Dispatch reports EMS crews were needed to rescue four children trapped in a house under a fallen tree.

Delta, Southwest, JetBlue and American Airlines were allowing travelers to change their Friday and Saturday flights to avoid delays and cancellations at key airports across the Northeast.