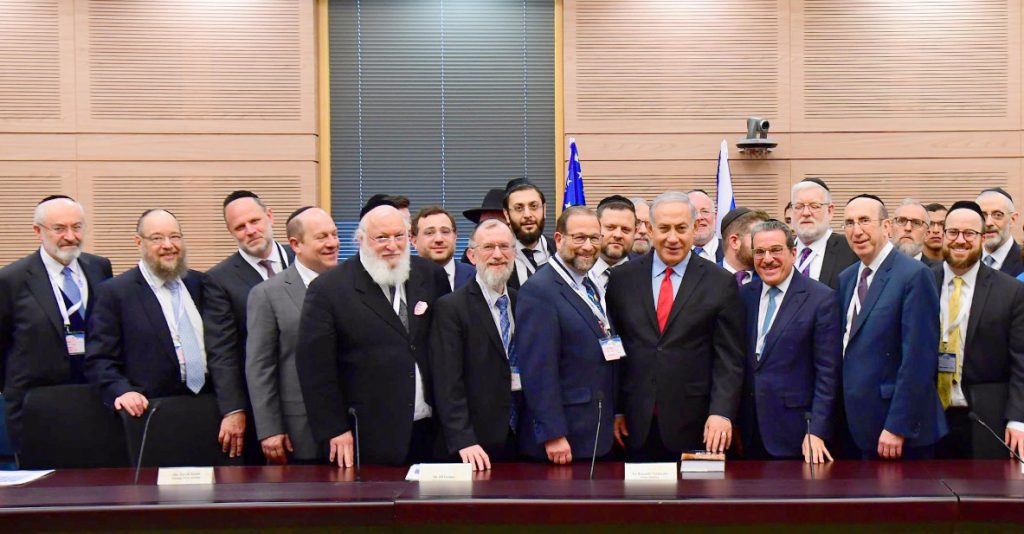 Summing up the brief, yet intense, visit of the Am Echad delegation to Israel this week, Mr. Shlomo Werdiger, chairman of the board of Agudath Israel of America, found a few minutes to speak with Hamodia. “We think that — b’chasdei Shamayim — the shtadlanus paid off, and the intensive lobbying has at least opened the leading Israeli officials to listen to our side of the story. Of course we can’t expect instant results, but the fact that they were willing to hear us out, that in itself is a major achievement.

“We will need to follow this up once we get back to America, but we definitely see some positive progress.”

The mission was organized by Agudath Israel of America.

Mission leaders said the purpose of the trip was “to dispel the myth that American Jewry is represented by the Reform and Conservative movements,” and that it hoped to counter the false narrative that non-Orthodox groups are the true voice of American Jewry.

“We presented the Prime Minister and the other officials we met with, a special booklet produced especially for this trip. This pamphlet highlights the numbers of our community in chutz la’aretz, how the frum community is the Jewish community that is growing in leaps and bounds. And we also show that it is our children and grandchildren who travel to learn in Israel, in yeshivos, seminars, and many even set up life in Israel.

“While, yes, it is possible that the powerful Reform leaders have lobbied the Israeli government to recognize their movements, by the sheer enormity of their ‘donations’ to the State of Israel, we have shown that our contribution to the Israeli economy is perhaps not as big as theirs, but it’s definitely close.

“We also showed the deep connection of Orthodox Jews to Israel, while the other movements show little interest. How many of the children of these so-called sponsors or donors to Israel are leading the BDS movements in their college campuses? And for that they need to have a say, or even to try dictate terms of the religious state in Israel?

“Our point is not to put the others down, but to highlight our community’s commitment and contribution. Our only request is to at least get a seat at the table when Israeli officials engage American Jewry.”

What was the response from the ministers you met?

“Very positive. Not one of them turned down the visit, and they heard our side of the story. That itself was a chiddush, to even be heard out. But they saw the numbers, the statistics and finally started to realize that ultimately we are the future of the Jewish community — all the other communities have no continuity.”

What is at stake here?

“I’m sure most readers know the issues at hand.

“Until now, most of Israeli society does not accept or support Reform or Conservative Judaism, inroads are being made by these movements.

“Reform clergymen are now allowed to give ‘religious instruction’ in a few Israeli schools under the aegis of the Education Ministry. Yet when a dati teacher will try to throw in a few words about the parashah, the political system is up in arms: religious coercion…

“The status quo at the Kosel, the battle for Kedushas haKosel, for shemiras Shabbos, giyur, to name a few.

“These aren’t just ‘local’ issues. If, chas veshalom, the conversions aren’t done properly, this can undermine the entire Jewish world.

“We say that there is no justification for providing Conservative and Reform Jews with a new and improved prayer space at the Kosel, just because they make political noise about it. And actually, they make little use of the existing temporary space — known as Ezrat Yisrael — that they received from the government.”

A final word on this trip?

“We came to Israel to do our part, our hishtadlus, to make the case for kvod Shamayim. We can only hope that our message of truth, authentic Yiddishkeit, will impact those who it needs to influence.

“And, of course, we will continue to daven for continued hatzlachah and Siyatta D’Shamaya, that we be zocheh to make only a kiddush Shem Shamayim!”