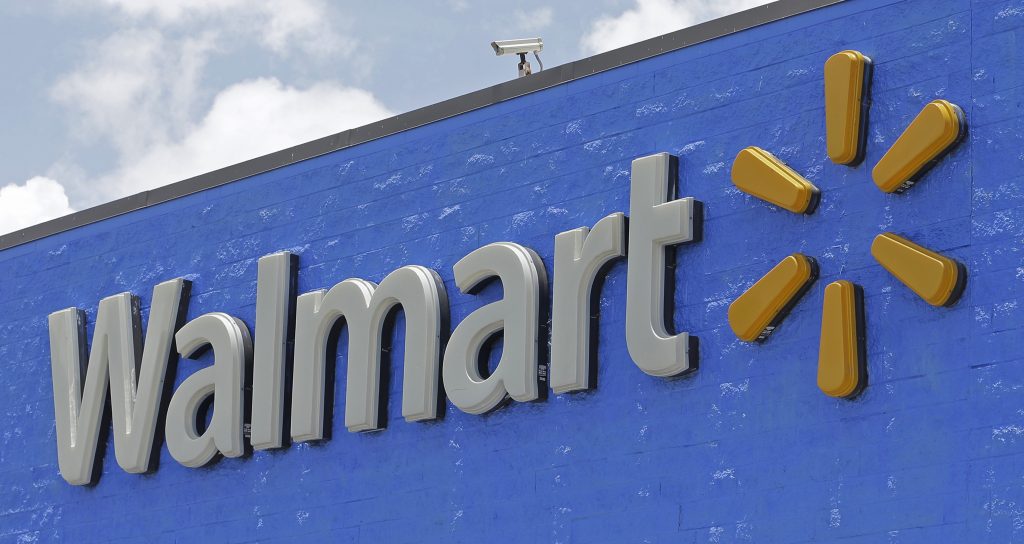 Walmart is taking some bruises from its battle with online leader Amazon.

The world’s largest retailer reported a lower-than-expected fourth-quarter profit and wrestled with slower e-commerce sales during the busiest time of the year, signs that underscore the company’s challenges in a fiercely competitive landscape.

Its shares slipped nearly 10 percent in afternoon trading, putting it on track for the biggest percentage drop since October 2015. Walmart was the largest percentage decliner in the Dow Jones industrial average, pushing down the benchmark index.

The mixed results raise concerns that Walmart’s push to narrow the gap between Amazon.com Inc. and itself may be losing steam, even it makes huge investments in both its digital business and stores like lowering prices. These investments, however, are eating away profits. E-commerce sales growth in its U.S. business slowed to 23 percent during the fourth quarter, a sharp decline from 50 percent in the third quarter. Walmart blamed the bulk of the slowdown on the company’s lapping its acquisition of online retailer Jet.com a year earlier. But it also acknowledged its own mistakes — a surge of toys and electronics to its warehouses during the peak periods of the shopping season crowded out more basic items. Still, Walmart finished the year with more than 40 percent growth in online sales in the U.S., and it expects that online sales will be revived this year to hit that same pace.

Walmart and other retailers of all stripes are looking at new ways to compete in light of swiftly changing shopping habits. The owner of Safeway and other grocery brands announced it was buying the drugstore chain Rite Aid as retailers continue to plunge deeper into health care. Albertsons Cos. executives said Tuesday that their purchase of Rite Aid’s more than 2,500 remaining stores will help the combined company become a “leader in food, health and wellness.”

Walmart itself is building fewer big stores and focusing on investments in its online business while beefing up benefits for its workers.

The nation’s largest private employer said last month that it would raise the starting salary for U.S. workers to $11 an hour, give a one-time cash bonus of up to $1,000 to eligible employees and expand its maternity and parental leave benefits. A number of U.S. corporations have announced employee bonuses and expanded benefits following drastic changes to the U.S. tax code.

But a hot economy has now forced employers to compete for workers who can be more choosy. The U.S reported this month that hourly pay rose in January from a year earlier at the fastest pace in eight years, and the unemployment rate hovered at only 4.1 percent for the fourth consecutive month.

Since buying Jet.com for more than $3 billion a year and a half ago, Walmart has added online services, acquired brands like Bonobos and ModCloth and vastly expanded the number of items available online. Walmart is also getting ready to launch an overhauled website with a focus on fashion and home furnishings. It has teamed up with Lord & Taylor to create dedicated space on its site.

Walmart has aggressively cut prices and plans to double the number of stores where groceries can be ordered online and picked up curbside, to 2,000 locations this year.

“We’re accelerating innovation in the business to make shopping faster and easier for our customers,” said Doug McMillon, CEO of Walmart Inc., in a prerecorded transcript.

But Walmart has a long way to get even close to Amazon’s online dominance. Amazon.com Inc. has leveraged its $99-a-year Prime membership program into intense loyalty from customers, and it’s recently stepped into Walmart’s turf, no longer content with only online sales. After spending $14 billion to acquire Whole Foods last summer, Amazon just announced two-hour delivery from the grocery chain for its members.

The company said the strength was “broad-based” across all merchandise categories and that end of year sales were solid.

McMillon said the cost to acquire a new customer on a nationwide basis is cheaper with the Walmart brand than with the higher-end Jet brand, so it’s investing more in Walmart.com and reducing marketing investment in Jet except in certain urban markets. Due to this change, Jet will not grow as quickly as it did in its early days, he said.

At Walmart’s Sam’s Clubs, same-store sales rose 2.4 percent in the fourth quarter. The company announced earlier this month that it was offering free shipping for premium members and simplifying its membership tiers.

Last month, Sam’s Club began closing 63 U.S. clubs while turning a dozen of them into warehouses for digital sales, with the goal of speeding up deliveries.

The company said during the call that its federal corporate tax rate for the current year will be between 24 percent and 26 percent due to the new tax reform. Walmart’s previous tax rate was 32.5 percent. Walmart’s Chief Financial Officer Brett Biggs said that it expects a cash benefit of $2 billion for the year.