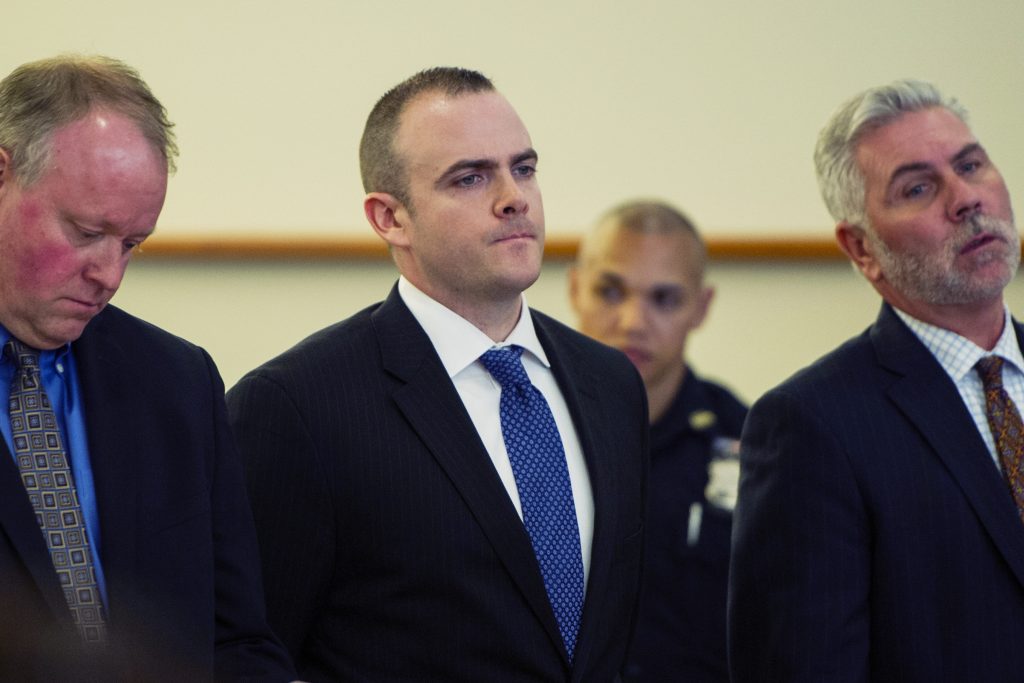 A police officer who fatally shot a mentally ill woman in her New York apartment in 2016 after she brandished scissors and a bat was acquitted by a judge Thursday.

Defense attorney Andrew Quinn said, “We’ve always felt confident we would win, but you never know” until the verdict is announced.

Less than five years before she died, Danner wrote a searing, eloquent essay on living with schizophrenia, agonizing over the deaths of mentally ill people like her at the hands of police.

Officers had been called to her Bronx home several times before, and had taken her to hospitals.

Barry testified that before the shooting he persuaded Danner to put down the scissors and then tried to grab her before she had a chance to pick them up again.

“She was too fast for me,” Barry said. “The last thing I want was for her to go into the room and get the scissors.”

Barry said he drew his gun and pleaded with her to drop the bat, but she stepped toward him. He said he could not back up because five other officers were crowded close behind him.

“I just see the bat swinging and that’s when I fired,” he said. “I’m looking at this bat that can crack me in the head and kill me.”

O’Neill said at the time that his department had “failed” by not subduing Danner without resorting to deadly force.

“That’s not how it’s supposed to go,” O’Neill said. “It’s not how we train; our first obligation is to preserve life, not to take a life when it can be avoided.”

De Blasio said officers are only supposed to use deadly force when “faced with a dire situation” and then “it’s very hard to see that the standard was met.”

Bronx District Attorney Darcel D. Clark, expressed disappointment in the verdict, saying that Danner’s death illustrates the larger issue of how “we need changes in the way we address people with mental health issues.”

“There must be serious reforms to improve access to treatment so the situation does not rise to a crisis,” she said. “Mental health professionals should be part of the response to emotionally disturbed persons.”

Sgt. Ed Mullins, head of the Sergeants Benevolent Association (SBA), said on Twitter after the verdict that he offers his “empathy and sympathy” to Danner’s family, but that he has “nothing but outrage” toward de Blasio, O’Neill and Clark “for the malicious prosecution that was conducted for the most nefarious of reasons.”

In a statement following the verdict Thursday, O’Neill said that although Barry was acquitted, the NYPD would conduct its own investigation of the incident.

“Today’s court decision determined that Sgt. Hugh Barry had no criminal culpability. It does not, however, make the loss of Deborah Danner’s life any less tragic,” said the commissioner. “Our police officers and their supervisors are committed to protecting lives – it’s one of our core values. Our mission is to fight crime and keep everyone safe – the public as well as our police officers. Every day, officers respond to very difficult situations. It’s not an easy job. But we, as a department and as individuals, must be accountable for our actions.

“The NYPD has a responsibility to train and equip our officers to handle the many challenges they face, and to ensure our response to calls for service are measured and appropriate. The NYPD’s disciplinary review of the tactical and supervisory decisions leading to the discharge of a firearm in this case will now proceed.”

Mullins fired back at O’Neill after the latter’s statement.

“On the heels of total vindication of all charges against Sgt Barry, PC O’Neill feels it necessary to tell all the NYPD you are all on your own and will NOT be backed,” Mullins tweeted. “ Let’s not forget his words were the indictment #WeAreBarry.”

The death of Danner, who was black, at the hands of Barry, who is white, invited comparisons to the 1984 police killing of another black Bronx woman, Eleanor Bumpurs, who was shot after waving a knife at officers.