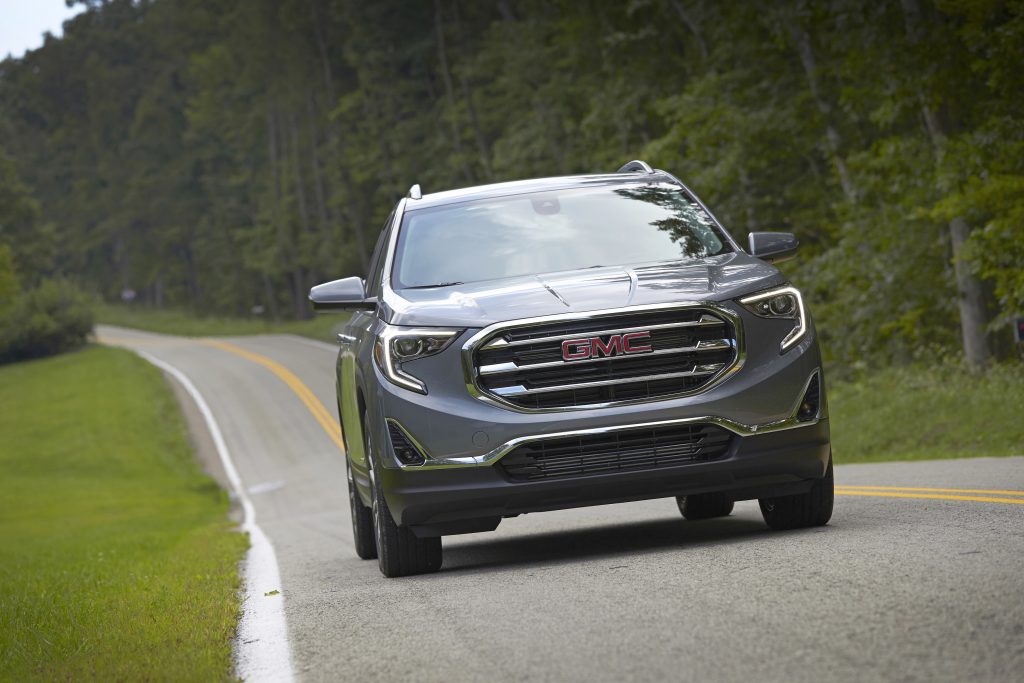 GMC’s Terrain compact crossover has moved into its second generation for 2018, with a roomier interior, lots of new technology and its first diesel engine, which was under the hood of our test vehicle.

All three of the available engines are turbocharged: the 1.5- and 2.0-liter gasoline four-cylinders, and the 1.6-liter diesel four-cylinder.

EPA fuel-economy ratings are impressive for the diesel, at 28 mpg city/39 highway with front-wheel drive, and 28/38 with all-wheel drive. During our week in the SLT Diesel all-wheel drive, we averaged 33.7 mpg, with about two-thirds highway driving.

To shift the transmission, the Terrain has funky pull-push buttons in the lower center of the dash for “Park,” “Drive,” “Reverse,” and “Neutral.” GMC says this arrangement was intended to provide more storage room in the center console by replacing the conventional transmission shifter with these electronically controlled “intuitive pushbuttons and pull triggers.”

GMC calls it Electronic Precision Shift, and my first time in the new Terrain it took me a while to figure out where the gearshift was. I was looking for a traditional column- or center-console-mounted shifter.

The buttons are easy to operate, though, and for safety’s sake, you do have to pull out on them to put the vehicle into gear. That prevents accidentally bumping the Terrain into “Drive” or “Reverse” while fooling with gadgets and such in the center console.

The Terrain also comes with GMC’s driver-controllable Traction Select system, with settings for varied driving conditions. The all-wheel-drive models, like our SLT Diesel tester, include a front-wheel-drive mode to minimize drag and boost fuel economy when all-wheel drive isn’t needed.

The Terrain has room for up to five passengers, and no third-row seat is offered to expand passenger capacity.

Included at no extra charge on the SLT Diesel was the Preferred Package, with hands-free rear power programmable liftgate; memory settings for the power driver’s seat and outside mirrors; a six-way power front passenger seat with power lumbar; and universal garage/gate opener.

In the center of the dash was an eight-inch multi-color touch-screen for the GMC Infotainment/Navigation system with Bluetooth streaming audio for music and select phones, compatibility with Apple CarPlay and Android Auto, and satellite radio.

The navigation was extra on our tester, part of the Infotainment Package II ($1,180), which also brought a Bose seven-speaker audio system, HD radio, and OnStar Connected Navigation. The rearview camera system showed its image on the eight-inch screen.

We also had the Driver Alert Package I ($840), with Side Blind Zone Alert with Lane Change Alert, Rear Cross Traffic Alert, Rear Park Assist and the Safety Alert Seat.

Eight exterior colors are offered: Summit White, at no extra charge, and six premium colors for $395 each, including the Quicksilver Metallic on our tester; and one for $495, called Red Quartz Tintcoat.

The tester also came with the OnStar 4G LTE Wi-Fi hotspot. An unlimited data plan through AT&T is offered for $20 a month. The OnStar Basic Plan is standard across the line at no extra cost for the first five years.

The new Terrain has a roomier interior and lots of standard and available new technology. The cabin has also been extensively restyled, with a low windshield base that gives a larger outward view.

Among new interior features is the kneeling rear seat. Its bottom cushions tilt forward when the split-folding seatbacks are lowered, allowing a flat floor for easier loading of cargo. The front passenger seat also folds down to allow for hauling long items if there is no passenger in the front.

We had more than enough power with the diesel engine for a long road trip that included some mountain driving. Passing was easy, as the low-end torque from the diesel kicked in just when we needed it for quick pickup.

The diesel engine is a bit noisy at idle, but isn’t all that noticeable at highway speeds. One of our passengers did remark while sitting at a traffic signal that “the engine sounds weird.” She didn’t know it was a diesel, just that it sounded different.

Rear passengers had a 12-volt power outlet and two USB charging ports available in the rear of the front center console, along with A/C vents. A pull-down center armrest was available when there was no middle passenger, and it had two cupholders. There are small single bottle holders in each door.

There are two decent-size side-by-side cupholders in the front center console for the driver and front passenger. In front of them is a tray for smartphones, and behind is a covered console box.

The Terrain was surprisingly quiet inside, even at highway speeds. Conversation between front and rear passengers was easy – no one had to raise their voices.

Ride and handling were typical for a modern crossover, smooth and carlike, with no real complaints. Everyone was comfortable, front and rear, although we didn’t put anyone in the rear middle position.

Total sticker price for our 2018 Terrain SLT Diesel all-wheel drive was $41,400, including freight and options.

Highlights: The second generation of GMC’s compact crossover has arrived for 2018. It’s completely redesigned inside and out, with more safety and connectivity/comfort features. Two turbocharged gasoline engines and a turbo diesel engine are available.