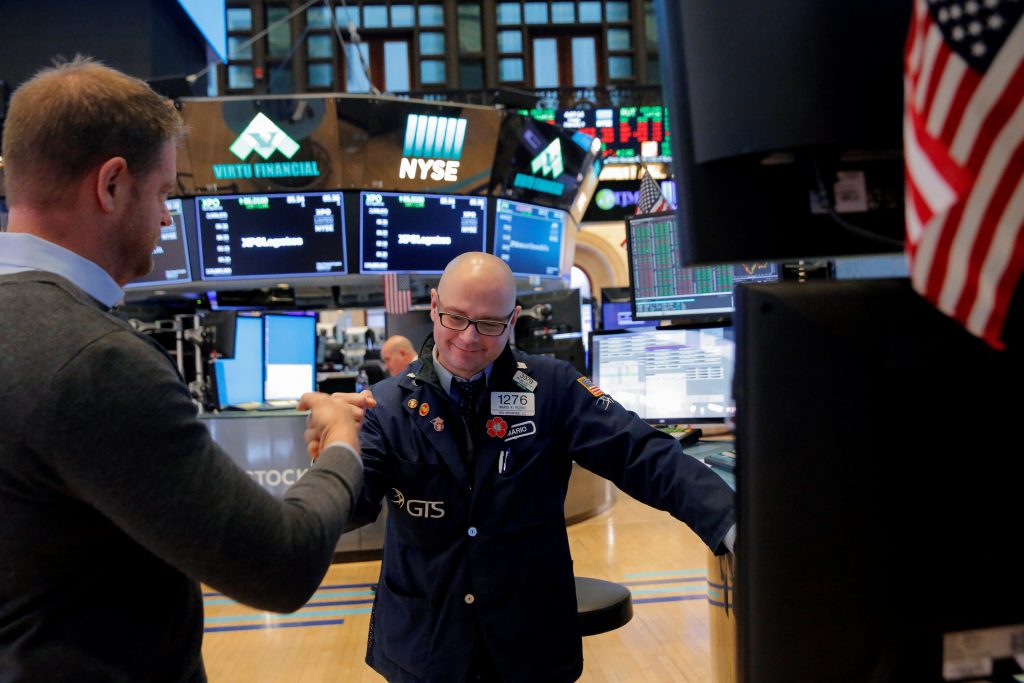 U.S. stocks ended with a more than 1 percent gain on Friday after another session of whipsaw trading, though the Dow and S&P 500 posted their biggest weekly losses since January 2016.

Even with Friday’s gains, all three major U.S. indexes were down more than 5 percent for the week, and investors said the sharp swings that marked the week’s trading were likely to continue.

“I don’t see any reason to think that we’re setting a pattern for next week or the rest of the year. The only pattern we’re setting is more volatility,” said Rob Stein, chief executive officer of Astor Investment Management in Chicago.

The Dow had a more than 1,000-point difference between its high and low. Wall Street’s fear gauge, the Cboe Volatility Index, also known as the VIX, ended lower on the day but remained well above its recent trading range.

Concerns about higher bond yields and interest rates spurred recent selling of equities, disrupting an extended advance in stocks, though the retreat in the U.S. market had been long awaited by investors.

Higher yields tend to hurt equities because they increase borrowing costs for companies and ultimately consumers. They also present an alternative to investors who may reallocate some funds to bonds from equities.

On Thursday, the Dow and S&P 500 indexes slumped more than 10 percent from their Jan. 26 record highs, confirming they were in correction territory.

Stocks on Friday began to bounce after the S&P 500 briefly broke below its 200-day moving average, a level seen as technical support.

“You will often see bounces off those levels. In fundamentals, I did not see any news around that time when the market started turning around,” said Anwiti Bahuguna, senior portfolio manager at Columbia Threadneedle Investments in Boston.

Next week, coming off one of the most volatile stretches in years, two important readings on U.S. inflation could help determine whether the stock market begins to settle or if another bout of volatility is in store.

The pan-European FTSEurofirst 300 index lost 1.40 percent and MSCI’s gauge of stocks across the globe gained 0.04 percent.

Earlier, the Shanghai Composite Index tumbled as much as 6.0 percent to its lowest since May 2017, and the blue chip CSI300 index dived 6.1 percent.

Chinese equities were hurt by the drop in global shares and by traders closing positions before the Lunar New Year holidays starting next week.

The U.S. House of Representatives joined the Senate early on Friday in approving a budget bill that raises military and domestic spending by almost $300 billion over the next two years. With no offsets in the form of other spending cuts or new tax revenue, that additional outlay will be financed with borrowed money.

In currencies, the dollar rose for its strongest week against a basket of currencies in nearly 15 months as some traders piled into the greenback after the volatility in stocks and bonds.

Oil prices slid more than 3 percent as U.S. futures fell below $60 a barrel for the first time since December on concerns about rising crude supplies.