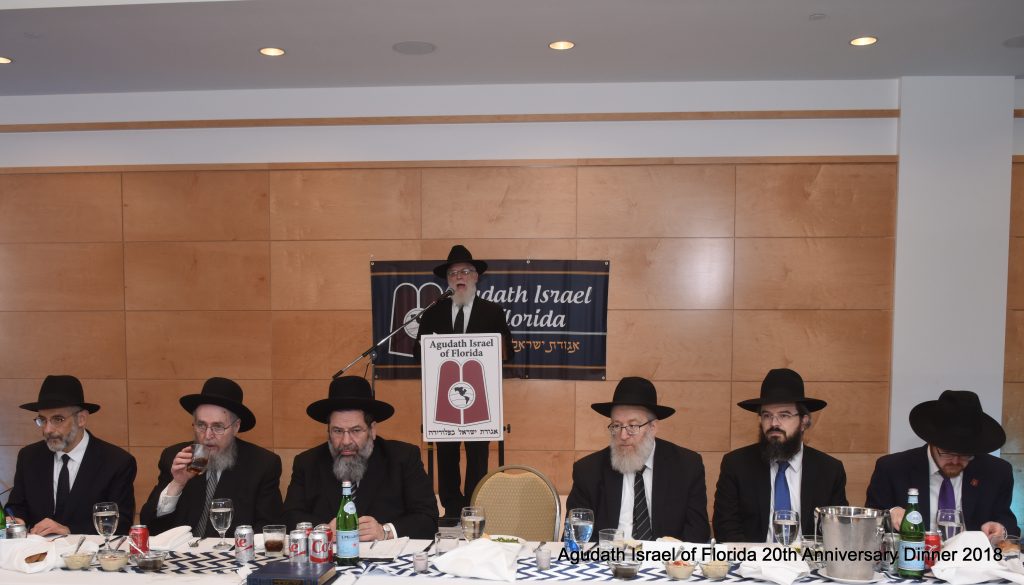 It was in late 1997 that a handful of askonim gathered in a Miami home to take advocacy and organization for the Sunshine State’s Torah community to the next level. The solution – to create Agudath Israel of Florida.

This past Tuesday, February 6, those askonim, spearheaded then as now by Dr. Jonathan Rubin, gathered in the elegant ballroom of the Young Israel of Bal Harbour to celebrate twenty years of effective shtadlonus, as leaders and community members paid tribute to Agudath Israel of Florida.

Rabbi Neuberger, the event’s honored special guest, spoke of his “great pride” in Agudah of Florida. He elaborated on the inherent desire of Klal Yisroel to continuously grow, and achieve increasingly greater heights, and hailed the leadership of Rabbi Moshe Matz, Executive Director of Agudath Israel of Florida.

In an emotional speech, Rabbi Matz enumerated several of the accomplishments of the past – including creating a coalition of nonpublic schools and advocating for them thereby bringing in millions of dollars for local Yeshivos and Bais Yaakovs and their families; founding the Agudah Rabbinic Conference of Florida; growing Pirchei and Bnos youth groups in both numbers and scope; and introducing Florida to Chayim Aruchim – the Center for Culturally Sensitive Health Advocacy and Counseling. He pledged to grow Agudah of Florida in the coming years, leaving the audience positively charged with his vision of the future.

Rabbi Chaim Dovid Zwiebel, Executive Vice President of Agudath Israel of America, followed with stirring remarks. The gains of Agudah of Florida affect not just the Orthodox population of Florida but that of the entire United States, Rabbi Zwiebel said, drawing attention to several milestones. Agudah of Florida was one of the first state chapters to help secure Title I Aid for yeshivos. It has also effectively represented Torah-true views in a critical presidential-election swing state, and serves as an exemplar of what a regional Agudah should be for others to emulate.

Rabbi Zwiebel also shared warm words of appreciation for Rabbi Matz, hailing him as a nationally known figure and declaring that Agudah of Florida’s influence extends well beyond its borders.

The Rosh HaYeshivah of Yeshivah Darchei Torah, Rabbi Yaakov Bender, delivered the evening’s keynote address. Rabbi Bender’s powerful speech focused on the critical value of every single individual. “Every yochid counts!” Rabbi Bender declared. He drove that point home with an illustrative dvar Torah: Why is the message of achdus Yisroel associated with the giving of the Torah? Surely the Jews were united at the Yam Suf, too? However, the Rosh Yeshivah answered, there is no novelty in unity when faced with adversity—but when surrounded by the freedom and comfort of pre-Torah Sinai and yet still working in tandem, therein lies the remarkable power of achdus. He further emphasized the value of each yochid that comprises the rabbim.

That moment was heightened when the capacity crowd was surprised and electrified by the largely unannounced appearance of HaRav Aharon Schechter, Rosh HaYeshivah of Yeshivas Rabbeinu Chaim Berlin and member of the Moetzes Gedolei HaTorah. At Rav Schechter’s appearance the crowd rose to its feet, where they remained, standing respectfully, until the Rosh Yeshivah was brought to his place of honor.

Agudath Israel of Florida was established by the pioneering efforts of Rabbi Yisroel Lefkowitz a”h, together with its president, Dr. Jonathan Rubin of Miami Beach and Rabbi Labish Becker, executive director of Agudath Israel of America, together with others. They saw the opportunity to make a difference to the year-round community as well as winter visitors and the effort succeeded beyond their expectations.

Remarked Board member Dov Sostchin, “Agudah of Florida is truly a unifying force. From the youth groups – where children from yeshivos and Bais Yaakovs throughout the community join together as part of Pirchei and Bnos Agudath Israel of Florida, to adults where Daf Yomi programs and other Agudah events are the catalyst for achdus.”

The event was “inspiring,” said Rabbi A.D. Motzen, Agudah’s national director for state relations who together with Rabbi Becker, attended the event along with Florida community leaders, activists and members. “Agudath Israel is comprised of staff and lay leaders pulling together to effectuate change for the community and this dinner highlighted the many ways in which Agudah of Florida serves the needs of the community and the individual.”