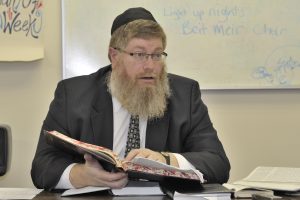 Rabbi Yitzchok Dovid Schwartz, z”l, mechanech, writer, and former Mara d’Asra of Congregation Sfard of Flatbush, was niftar on 22 Shevat. He was 60 years old, and had been suffering from a serious illness for several months.

In each of the diverse roles Rabbi Schwartz filled, his depth of thought, balanced by his easygoing personality and good humor, made him a uniquely beloved and valued figure, leaving an indelible impression on those whom he encountered.

A dedicated talmid and devotee of sefarim such as the Pachad Yitzchak, Rav Tzadok Hakohen, the Torah of Beis Izhbitz and other similar works, he drew from the deep waters of Chassidus and machshavah with a distinctive ability to bring their teachings into his own life, as well as into the lives of others.

Rabbi Schwartz was born in 1957 and spent his formative years in Los Angeles. His parents, Reb Meilech, z”l, and Mrs. Lydia Schwartz, a”h, were both Holocaust survivors from Poland, who vividly imparted the authentic atmosphere of yiras Shamayim that they had experienced in their youth to their children. Reb Meilech, an Ostrovtzer chassid, had led the Talmud Torah of the kehillah of Lodz prior to the war, and after emigrating to America served as a Rav, chazzan and shochet.

Young Dovid attended Yeshivas Ohr Elchanan, then under the leadership of Harav Simcha Wasserman, zt”l, and the end of his high school years traveled to New York to attend Yeshivah Rabbi Chaim Berlin. The move would have a profound effect on his life. He was privileged to know Harav Yitzchok Hutner, zt”l, whose works were a particular favorite of Rabbi Schwartz, and he became a dedicated talmid of, ybl”c, Harav Aharon Schechter, shlita, with whom he forged a close bond.

The many years he spent within the walls of that hallowed institution served to nurture his innate affinity for sifrei machshavah and the profound thoughts they contain.

Additionally, Rabbi Schwartz spent a year in Eretz Yisrael, where he studied in Yeshivas Mir under Harav Chaim Shmuelevitz, zt”l.

In 1984, he married Sima Stein, the daughter of Rabbi Chaim Stein, one of Chaim Berlin’s early talmidim. Rabbi Schwartz was a member of Kollel Gur Aryeh for several years before accepting a position as a Rebbi in the Fasman Yeshivah High School, a division of Beis Hamedrash LaTorah, in Skokie, Illinois, later moving on to Yeshivah Tiferes Torah in Staten Island.

For more than 20 years, Rabbi Schwartz dedicated himself to outreach work, first teaching at Be’er Hagolah Institute, a school geared to immigrants from the Former Soviet Union, and later at the Jewish Heritage Center of Queens and Long Island. His unique ability to impart sophisticated concepts in Yiddishkeit to students who largely lacked formal yeshivah background made him a particularly effective force. His eloquence, wit, calm personality, and genuine caring for his fellow Jew made him all the more successful in encouraging many to strive for greater heights in avodas Hashem.

Starting as a young bachur, Rabbi Schwartz’s family background, thirst for ruchniyus, and intellectual leanings attracted him to the sefarim of the giants of Polish Chassidus. For many years, he wrote and distributed a weekly pamphlet, written in English, “From the Waters of the Shiloach,” based on the teachings of the sefarim of Bais Izhbitz. Combining his talent for writing as well as for explaining sophisticated concepts, these publications served as a valuable elucidation of some of the most radical and complex works in the catalogue of Chassidus.

In the years when Harav Shimon Schwab, zt”l, worked to make his divrei Torah available in print, among others, he enlisted Rabbi Schwartz to collaborate on producing what became the sefer Mayan Beis Hashoevah.

His unique skill with the written word and strong grasp of world affairs also made Rabbi Schwartz a greatly valued and beloved member of the staff of Hamodia for many years.

In 2011, Rabbi Schwartz began to serve as the Rav of Congregation Sfard, a historic shul on Coney Island Avenue, displaying great dedication to its small and diverse kehillah. He delivered several regular shiurim in both halachah and Aggadah. Each Shabbos morning, at Kiddush, Rabbi Schwartz would offer divrei Torah and lead niggunim, imparting an authentic “Yiddishe taam” to the weekly event.”

From there, the aron was taken to Lakewood for kevurah.