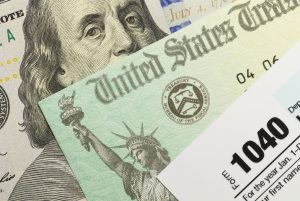 Orthodox advocacy groups are engaged in an effort to win a modest, but significant, tax relief for parents of Jewish and other private school students in New York State.

The issue focuses around federally tax-exempt savings accounts for college tuition, widely known by their number in the tax code: 529. One of the many changes to the federal code made by the recently passed Tax Cuts and Jobs Act opens up the funds to use for tuition for grades kindergarten through 12 at private schools of parents’ choice.

Many states also offer tax benefits for 529s, most basing rules on those defined by the federal government. However, a technicality in New York’s code has left the matter open for state authorities to decide whether Congress’ move will have an effect on state’s policy.

Avrohom Weinstock, associate director of Education Affairs at Agudath Israel of America, is among the leading voices advocating for the change to be mirrored in New York.

“The typical, middle-class frum parent is put in an almost impossible situation, sacrificing to make tuition payments of anywhere from $5,000 to $15,000 per child, and our mishpachos are growing, baruch Hashem. It’s untenable. While Agudath Israel has been instrumental in bringing millions of dollars in governmental funding to New York yeshivos over the years, one of our priorities now is bringing assistance directly to parents,” he told Hamodia.

The Agudah, together with the Orthodox Union (OU), the Catholic Conference and other private-schools activists, has been reaching out to legislators and state officials in the hopes that final clarification of the matter will be favorable for the hundreds of thousands of parents they represent.

Yet, it seems they are facing an uphill battle. In mid-January, the New York State Department of Taxation and Finance released a report on effects of the federal tax bill, saying, “it appears that distributions [of 529 funds] for K-12 tuition expenses would not be considered qualified distributions under … New York statutes.” However, a subsequent memo from the department added that they “will continue to review the federal law’s provisions on 529 plans … and welcome discussion for possible solutions and alternatives.”

State Senator Simcha Felder told Hamodia that he did not think the report closed the door to overtures on the matter.

“Right now they made it clear that their interpretation excludes K through 12, but that doesn’t mean that we shouldn’t keep advocating for change,” he said. “People who are working to help New York families that send to non-public schools should definitely keep up their efforts.”

Several other voices in the state legislature have also expressed support for changing the state law to mirror recent federal changes, Senate Majority Leader John Flanagan reportedly among them.

“For now, we have to hold off on utilizing them for K though 12, but the discussions are ongoing at multiple levels,” Nathan Diament, executive director of the OU Advocacy Center, told Hamodia. “Like a lot of issues with tax, the discussion of 529s are tied to a lot of larger issues. Tax is like a Rubik’s cube; once one piece gets moved it affects everything else along with it, and we are hoping to get this piece resolved in a way that’s favorable for the community.”

The issue has become a flashpoint for anti-school-choice voices as well, most prominent among them the New York’s teachers’ union, which is advocating strongly against the change.

One key argument used for maintaining the status quo is that expanding 529’s tax advantages to primary schooling would gravely decrease the state’s tax base.

In an article recently published in the Harvard University-backed journal Education Next, Mr. Weinstock engaged in a comprehensive mathematical review of the widely circulated cost projections of expanding 529s at the state level, demonstrating that the move would come at a minimal cost to New York. He said that some policymakers had taken note, and are working with him to see what can be done.

“This would help the very individuals that Democrats who opposed the 529 federal overhaul seek to assist,” said Mr. Weinstock. “There are some that see school choice as a zero-sum game. That’s unfortunate. A strong public school system and robust private school network benefit all.”

The expansion, should it be made, could stand to benefit families far more than the federal adjustment. According to federal law, only the profits made on investments in 529 accounts are tax exempt, limiting the advantages of this financial instrument to parents who can invest significant sums for a number of years before withdrawing for tuition.

Yet under state law, contributions of up to $10,000 to 529s are deductible from one’s taxable income, which could yield significant savings for any family able to set aside funds for their children’s education, even if only for a short period of time.

“Listen, it’s a deficit year. New York is projecting a $4 billion shortfall, and we know that,” said Mr. Weinstock. “But our middle class, tuition-paying parents may be running a deficit every year. They pay billions into the system in the form of taxes to support education, and receive little in the form of educational assistance in return. We owe it to them to fight for relief, irrespective of the financial climate in Albany. The federal win regarding 529s, and the ability to build on that at the state level, present a needed opportunity to somewhat ease that crushing burden.”

This article appeared in print on page 30 of the February 7th, 2018 edition of Hamodia.