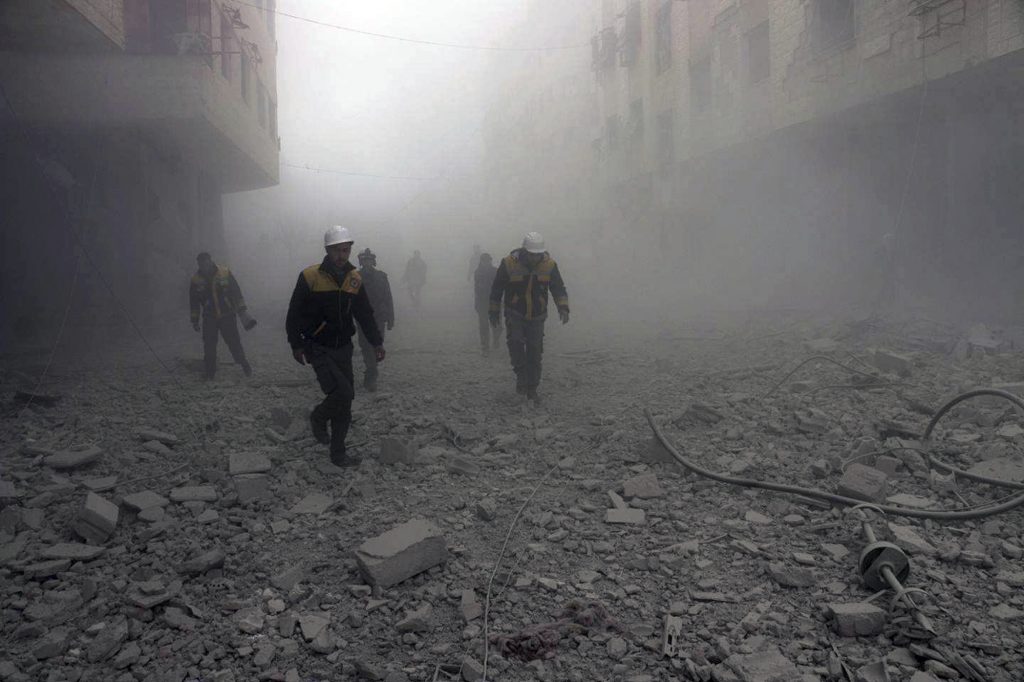 Russian and Syrian government forces launched a new wave of strikes on Tuesday, killing at least 19 civilians in a besieged area just outside Syria’s capital, Damascus, according to activists and a war monitoring group.

The onslaught came a day after a rash of airstrikes battered Syrian opposition areas, killing more than 28 people east of Damascus and striking at hospitals and residential buildings in the northwestern Idlib province. Syrian government forces have been on the offensive in Idlib in recent weeks but the push intensified after terrorists shot down a Russian Su-25 near the town of Saraqeb over the weekend.

Russia has waged a punishing aerial campaign against Syria’s armed opposition since intervening in the civil war on the side of its ally, President Bashar Assad, in 2015.

The Britain-based Syrian Observatory for Human Rights said 10 towns in the Eastern Ghouta region outside Damascus were bombed on Tuesday. The activist-run Ghouta Media Center said at least two, Douma and Harasta, was struck by ground-to-ground missiles.

The Syrian Civil Defense search-and-rescue group, known as the White Helmets and which works in opposition areas, called it “another bloody day for civilians” in Eastern Ghouta.

It released a video of its workers rushing to rescue victims from the debris on Tuesday. The Observatory said 25 people were killed Tuesday. The Civil Defense put the death toll at 19.

From Damascus, the United Nations called for an immediate, month-long ceasefire in Syria in order to deliver critical humanitarian aid and medical care to civilians trapped by fighting in regions across the country.

The U.N. mission warned in a statement on Tuesday of “dire consequences” to the humanitarian crises in the country, and identified seven areas requiring urgent humanitarian relief. It said that ongoing fighting and the deliberate obstructions by forces at the front lines were blocking aid organizations from reaching civilians in need.

The U.N. says it has a plan to reach 700,000 people with relief in the next two months, if it can get permission to proceed.

Syria’s multisided war has drawn in armies and insurgents from around the world, aggravating a conflict that began as an uprising against Assad’s rule. Though Assad appears to have survived the insurgency, his forces continue to bomb and besiege opposition pockets around the country, including in Eastern Ghouta and Idlib.

The White Helmets said airstrikes targeting the village of Termala in Idlib on Tuesday killed three people. It said one of its workers was also killed by an airstrike while responding to a call for rescue in the area.

Turkey began deploying forces in an observer role to the rebel-held Idlib in October as part of a “de-escalation” agreement with Iran and Russia to stabilize the lines of conflict in the war-torn country.

That deployment is separate from a Turkish military offensive that Ankara launched last month to rout U.S.-backed Syrian Kurdish fighters from the northern enclave of Afrin.

The Russian military said on Tuesday it had asked Turkey to help recover the debris of the downed Russian fighter jet in order to establish the type of weapons that were used to shoot it down. Al-Qaida-linked terrorists said they downed the Russian Su-25 in Idlib on Saturday with a portable air-defense missile.

Russian officials say the pilot engaged in a gun battle with terrorists before blowing himself up with a hand grenade. It was the first time a Russian jet was shot down over Syria since Russia launched its air campaign on Assad’s behalf.

Also Tuesday, Iran’s President Hassan Rouhani criticized Turkey’s ongoing offensive against U.S.-backed Syrian Kurdish fighters in the Syrian enclave of Afrin, saying it doesn’t serve the interests of any country in the region.

Rouhani was quoted as telling his Russian counterpart Vladimir Putin in a phone conversation that “tensions in northern Syria do not benefit anybody.” Iran is another key supporter of Assad’s government.