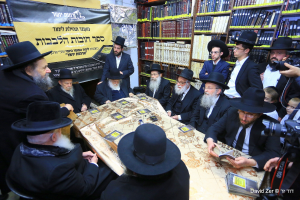 A gathering of senior mashgichim in Eretz Yisrael arrived at the home of Hagaon Harav Chaim Kanievsky, shlita, in Bnei Brak on Monday night to inaugurate a year of limud hamussar in honor of Hagaon Harav Aharon Yehuda Leib Shteinman, zt”l.

It was announced that this year will be devoted to studying the classic work Chovos Halevovos, divided into monthly sections.