Politics In His First State of the Union, Trump Calls for Optimism in Spite of Warnings of Danger
Politics 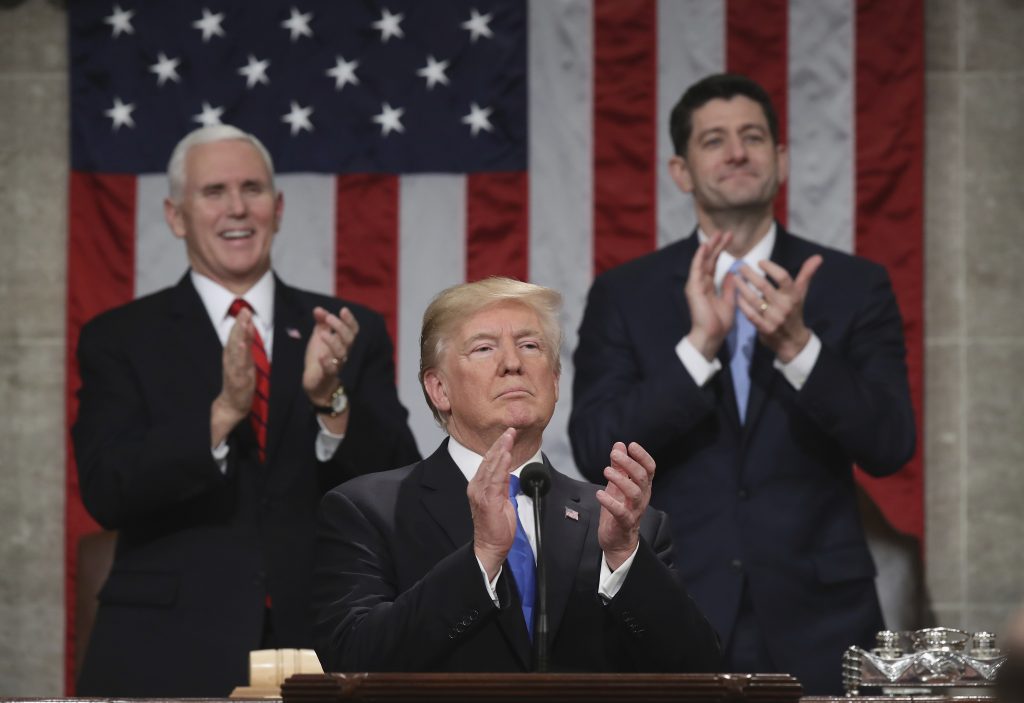 Addressing a deeply divided nation, President Donald Trump summoned the country to a “new American moment” of unity in his first State of the Union, challenging Congress to make good on long-standing promises to fix a fractured immigration system and warning darkly of evil forces seeking to undermine America’s way of life.

Trump’s address Tuesday night blended self-congratulation and calls for optimism amid a growing economy with ominous warnings about deadly gangs, the scourge of drugs and violent immigrants living in the United States illegally. He cast the debate over immigration — an issue that has long animated his most ardent supporters — as a battle between heroes and villains, leaning heavily on the personal stories of White House guests in the crowd. He praised a law enforcement agent who arrested more than 100 gang members, and he recognized the families of two alleged gang victims.

He also spoke forebodingly of catastrophic dangers from abroad, warning that North Korea would “very soon” threaten the United States with nuclear-tipped missiles.

“The United States is a compassionate nation. We are proud that we do more than any other country to help the needy, the struggling and the underprivileged all over the world,” Trump said. “But as president of the United States, my highest loyalty, my greatest compassion, and my constant concern is for America’s children, America’s struggling workers and America’s forgotten communities.”

Trump addressed the nation with tensions running high on Capitol Hill. An impasse over immigration prompted a three-day government shutdown earlier this year, and lawmakers appear no closer to resolving the status of the “Dreamers” — young people living in the U.S. illegally ahead of a new Feb. 8 deadline for funding operations. The parties have also clashed this week over the plans of Republicans on the House intelligence committee to release a classified memo on the Russia investigation involving Trump’s presidential campaign — a decision the White House backs but the Justice Department is fighting.

The president devoted significant time to touting the tax overhaul he signed at the end of last year, promising the plan will “provide tremendous relief for the middle class and small businesses.” He also highlighted the decision made early in his first year to withdraw the U.S. from a sweeping Asia-Pacific trade pact, declaring: “The era of economic surrender is totally over.”

He spoke about potential agenda items for 2018 in broad terms, including a call for $1.5 trillion in new infrastructure spending and partnerships with states and the private sector. He touched only briefly on issues like health care that have been at the center of the Republican Party’s policy agenda for years.

Tackling the sensitive immigration debate that has roiled Washington, Trump redoubled his recent pledge to offer a path to citizenship for 1.8 million young immigrants — but only as part of a package that would also require increased funding for border security, including a wall along the U.S.-Mexico border, ending the nation’s visa lottery method and revamping the current legal immigration system. Some Republicans are wary of the hardline elements of Trump’s plan and it’s unclear whether his blueprint could pass Congress.

“Americans are dreamers too,” Trump said, in an apparent effort to reclaim the term used to describe the young immigrants in the U.S. illegally.

Throughout the speech, Trump paid tribute to acts of courage, sacrifice and heroism that he said embody “the beauty of America’s soul and the steel in America’s spine.” They included Americans who responded to hurricanes, wildfires or the mass shooting in Las Vegas; and others who suffered losses of loved ones or who showed bravery in the face of danger.

Those tributes were many of the most effective moments of the speech. He also said, “But it is not enough to come together only in times of tragedy. Tonight, I call upon all of us to set aside our differences, to seek out common ground, and to summon the unity we need to deliver for the people we were elected to serve.”

Trump had a positive story to tell about the economy, which continued to grow steadily over the past year. The jobless rate is at its lowest level in 17 years, and wages have begun to rise. The stock market has set record after record, though the Dow Jones industrial average dropped 363 points on Tuesday after a big decline on Monday.

The passage of the Republican tax cut has prompted companies to give bonuses to workers, announce new investments and promise more jobs. The president has been a cheerleader calling for more, as he did at the World Economic Forum in Davos, Switzerland, last week. All this has put economic optimism higher than it has been in nearly two decades.

The president also highlighted conservative priorities that he and his party have jointly pushed in an effort to redirect the government. He pointed to a reduction in regulations on businesses and energy producers, to the confirmation of conservative judges and to his decision to move the U.S. embassy in Israel to Jerusalem.

Republicans led multiple rounds of enthusiastic applause during the speech, but for the opposition party it was a more somber affair. Democrats provided a short spurt of polite applause for Trump as he entered the chamber, but offered muted reactions throughout the speech.

On international affairs, Trump warned of the dangers from “rogue regimes,” like Iran and North Korea, terrorist groups, like the Islamic State, and “rivals” like China and Russia “that challenge our interests, our economy and our values.” Calling on Congress to lift budgetary caps and boost spending on the military, Trump said that “unmatched power is the surest means of our defense.”

Trump said he was also asking Congress to ensure the U.S. had needed powers to detain Islamic State terror group members and other “terrorists wherever we chase them down,” though it was unclear whether he was referring to a new war powers authorization or some other mechanism. Trump also said he wanted Congress to pass a law ensuring U.S. foreign aid goes only “to America’s friends” — a reference to his frustration at U.S. aid recipients that voted at the U.N. to rebuke his decision to recognize Jerusalem as Israel’s capital.