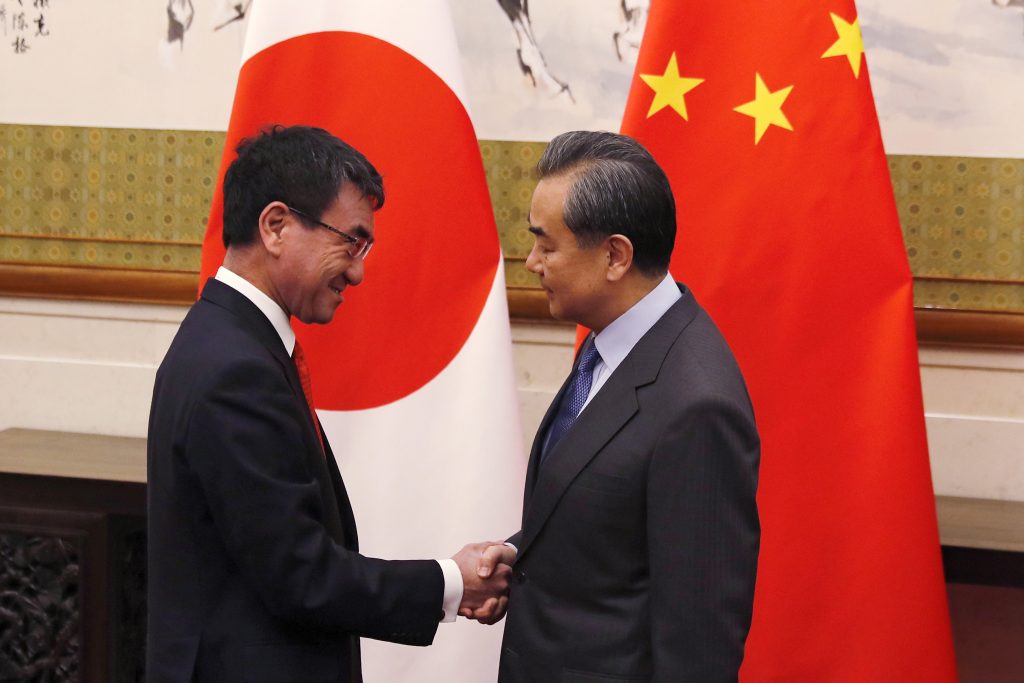 In opening remarks to his Chinese counterpart, Wang Yi, Kono said that as the world’s second and third largest economies, China and Japan “have a major responsibility in safeguarding the stability and prosperity of Asia and the world at large.”

“At present, the Sino-Japanese relations are at a crucial stage. There is positive progress, but many disturbances and obstacles remain,” Wang said.

Japan has pushed for stricter measures against North Korea, which fired a ballistic missile over the Japanese island of Hokkaido in August. In his remarks, Kono stressed the need for a united front against Pyongyang.

“Not only do we need to manage our bilateral relations, but we also need to work together to deal with issues facing the entire globe, in particular the issue of North Korea, which is the matter at hand for the international community as a whole,” Kono said.

The sides were working to arrange a trilateral summit in Tokyo between leaders from China, South Korea and Japan, followed by a visit by Abe to China and a visit by Chinese President Xi Jinping to Japan, said Norio Maruyama, a spokesman for Japan’s Foreign Ministry.

The official Xinhua News Agency quoted Yang as saying the sides should “set aside interferences, consolidate and expand beneficial factors and further the continued development and improvement of China-Japan relations.”

China and Japan experienced a major break in relations in 2012, after Beijing responded furiously to Japan’s nationalization of uninhabited East China Sea islands that Tokyo controls but which China claims.

They moved toward normalization with Abe’s visit to Beijing in 2014, however, mutual distrust continues to run high, especially over the islands, known in Japan as the Senkakus and in China as the Diaoyus. Taiwan also claims the islands, referring to them as Diaoyutai.

Maruyama said Kono stressed the importance of a coordinated approach to North Korea, but said Japan also raised the issue of recent Chinese incursions into its territorial waters.

“We don’t want to see anything that can undermine the improving relationship,” Maruyama said.

Japanese media quoted Defense Minister Itsunori Onodera telling reporters after the incident that Japan was “seriously concerned over acts that unilaterally raise tensions” and would “respond swiftly if a similar incident happens.”

Also this month, three Chinese coast guard vessels passed through what Japan considers its territorial waters surrounding the East China Sea islands in the third such intrusion this month.

Both incidents have been viewed as attempts by China to probe Japan’s ability to patrol the area and detect intrusions.

Animosity between the sides owes largely to Chinese resentment over Japan’s brutal invasion and occupation of large parts of China. Many Chinese feel Japan has never shown adequate contrition for its acts, a sentiment fueled by the ruling Communist Party’s use of heavy-handed nationalistic propaganda in schools and entirely state-controlled media.

Yet, the Japan-U.S. military alliance remains stronger than ever and Japan has responded to China’s territorial claims by recently opening a museum in Tokyo to present evidence intended to support its position.

South Korea has refused to do so and Beijing has lately softened its position by accepting a commitment to not expand the system, known as THAAD.

Hopes for further reconciliation rose in November when officials from Japan, South Korea and China met in the Philippines to discuss the possibility of again holding a trilateral summit between them. The last one was held in 2015.