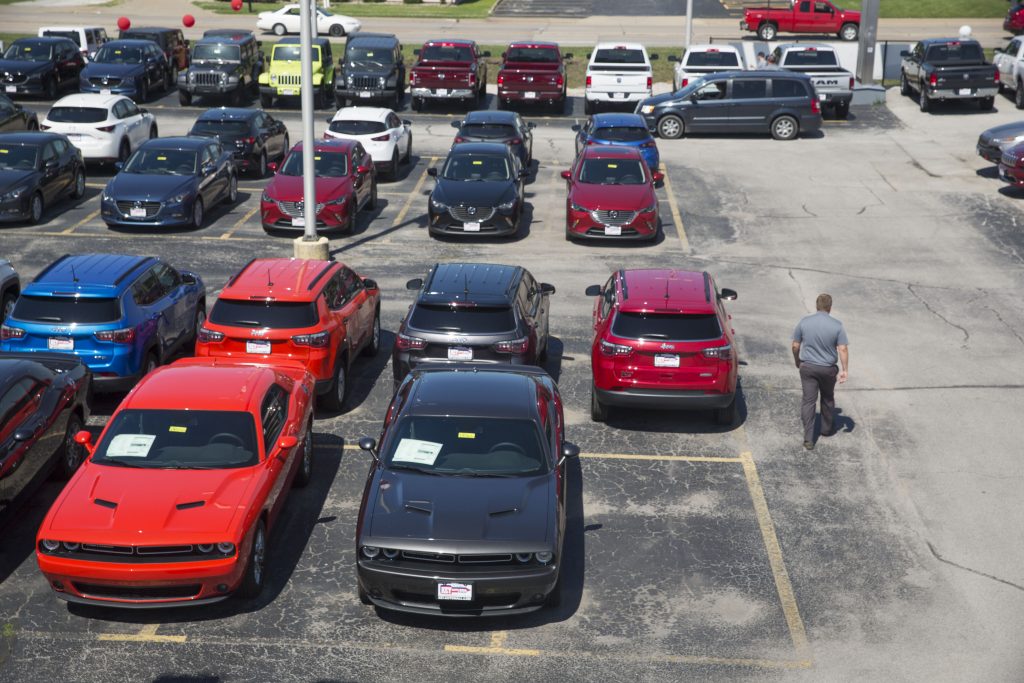 A growing share of the trade-ins that auto dealers and lenders accept for car-purchase financing are worthless on paper, a sign that banks and finance companies are making riskier loans to keep up revenue as vehicle sales slow.

Almost a third of cars traded in last year were worth less than the loans that had been financing them, according to car-shopping website Edmunds. That’s up from about a quarter a decade earlier, said Edmunds, which looked at cars traded in as part of financing packages for new auto purchases in the U.S.

The growing proportion of underwater trade-ins means that at least some borrowers are getting deeper and deeper in debt with every car they buy, said Jason Grohotolski, an analyst at Moody’s Investors Service. That could translate to bigger and bigger losses on loans for finance companies whenever the economy heads south — just as lower down payments for homebuyers walloped lenders during the housing crisis.

“It’s this cycle that just continually gets worse and worse,” Grohotolski said. “It has to stop, and it doesn’t have a favorable outcome.”

Underwater trade-ins are just one example of the greater risks that lenders are taking now. New vehicle sales fell 1.8 percent to 17.2 million in 2017, but lending volume for new and used car purchases was on track to be higher than ever, according to data from the Federal Reserve Bank of New York and consumer credit bureau Experian.

At least some lenders are finding that new business by reaching out to less creditworthy borrowers. Delinquencies are soaring for subprime car loans made by lenders outside the banking system, and in the third quarter reached the highest rate in more than seven years, according to New York Fed data from November.

Any pain from car-loan trouble will likely be just a shadow of the housing bubble collapse, because the auto debt market is much smaller. There were around $9 trillion of mortgages outstanding at the end of the third quarter, compared with $1.2 trillion of auto debt, the New York Fed said. And so far, many of the bonds backed by subprime auto loans are performing well thanks to built-in protections for investors. Wells Fargo analysts said in a note Wednesday that bonds issued by two of the biggest subprime auto lenders — Santander Consumer USA Holdings Inc. and General Motors Co.’s finance arm — have room to reach prices not seen since before the financial crisis.

A consumer is often the most underwater on his or her car loan in the first few years of ownership, because the value of the vehicle drops fastest over that time. By the fourth year, for example, the borrower has paid down a big chunk of the loan, catching up to the depreciation they took in the first few years. The average traded-in car was $5,130 underwater last year, up from $4,075 a decade earlier.

Even if a higher percentage of loans are upside-down, fewer financing packages include trade-ins now. For auto purchases that were financed in 2017, just 43.5 percent included trade-ins, compared with 50 percent in 2012, according to Edmunds.

For borrowers who do trade in their underwater cars, lenders are essentially giving them the money to pay down their loan. The dealer sells the used car, and whatever balance remains on the old loan is folded into the new loan. The borrower might get a longer-term loan than he or she had before to help keep monthly payments manageable. That means that loan balances are getting bigger relative to the value of the new car, and the debt will be paid off slower, said Grohotolski.

Auto loans performed relatively well during the financial crisis, which encouraged new lenders to step into the space, said Dan Zwirn, chief investment officer of Arena Investors. Risky car loans can be bundled into bonds and sold to investors, who are eager to buy them. That gives cheap funding to finance companies to reach out to riskier borrowers, he said.

“The same sorts of excesses are happening in car loans that happened in residential mortgages,” Zwirn said. “Ultimately, when the overall fixed-income market has an issue, even if this is not the cause, car loan debt will likely suffer greatly.”

A strong economy and low interest rates are helping keep borrowers afloat for now, and that should continue, said Grohotolski. But lenders may face a reckoning in a downturn, he said.

“We could be in a continued state of risk-building on lenders’ balance sheets,” Grohotolski said. “You may not necessarily recognize all of that risk until an unexpected downturn. There could be a meaningful increase in losses.”