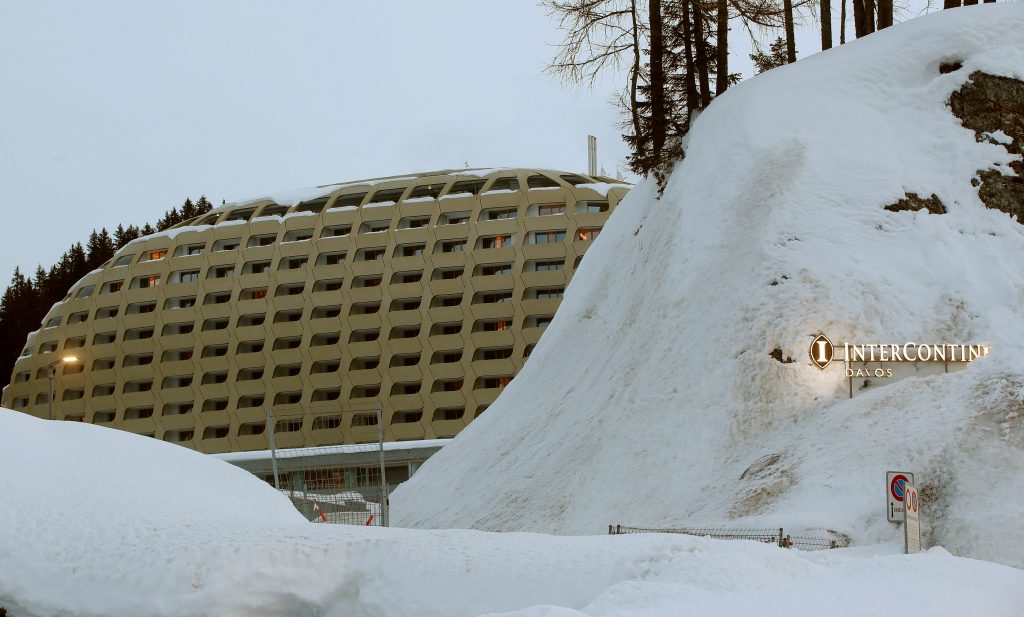 Snow was piled high outside, but inside the Davos summit, relations between President Donald Trump and the assembled global elites seemed to thaw.

Before President Trump’s debut appearance at the World Economic Forum, critics speculated that the president would function as a protectionist bull in the free-trade-loving china shop.

That uncertainty was clear as Trump arrived at the modern conference center Thursday for his two-day stay in the Swiss Alps. A hush fell on the crowd of people snapping photos and then someone asked the president how he would be treated.

“You tell me,” Trump shot back.

Overall, not that bad.

While there were scattered protests, some critiques and many panel discussions with Trump-wary titles — “Democracy in a Post-Truth Era” and “The Global Impact of America First” — the president’s visit also brought him praise from allies, a reception in his honor and a fawning dinner with European business executives.

“I think I have 15 new friends,” Trump enthused about his business dinner.

Before Trump’s centerpiece speech on Friday, attendees crowded around an international buffet in an open hall, before filing into the brightly lit hall.

“Now is the perfect time to bring your business, your jobs and your investments to the United States,” the president told the crowd.

Forum Chairman Klaus Schwab did draw some hisses in his introduction of the president when he said Trump’s presidency could be subject to “misconceptions and biased interpretations.”

And Trump himself got a mixed reaction during a brief question-and-answer session. When Schwab threatened to ask a personal question, Trump drew laughs by quipping: “I didn’t know about that.”

He also got a laugh about how he’s always been the recipient of good press coverage.

Showing up for the last two days of the summit, Trump flew over spectacular mountain scenery before landing in Davos via helicopter. Aides held Trump’s arms as he walked across the snowy landing zone to his waiting car — a wintry metaphor, perhaps, for entering the conference with caution.

It was not clear if he’d noticed a protest banner reading “Trump not welcome!” that hung on the side of a Swiss mountain.

As he moved through the conference center, political and business elites in dark suits and snow boots angled to snap his photo.

Taking time for some diplomacy along the way, Trump exuded affection in a Thursday meeting with close ally Israeli Prime Minister Binyamin Netanyahu and earlier played nice with British Prime Minister Theresa May, batting away the idea of a strained relationship. On Friday, he worked to mend relations with a key African leader following his use of a derogatory term when referring to African nations. Rwandan President Paul Kagame said they had “good discussions” on economic and trade issues.

Trump emanated confidence as he strode from room to room in the conference center, flanked by aides. “Today has been a very exciting day,” he declared to questions about how it was going.

After a reception in his honor, Trump used his dinner with business leaders to boast about the booming U.S. economy, showcasing his recent tax overhaul and deregulation efforts before soliciting comments from the group.

As he has before, Trump went around the table of CEOs, bantering with the president of Volvo about Mack Trucks, noting to a Nestle executive that he’d read candy was not their primary product and telling a Bayer executive he takes a daily aspirin.

“I should say, I only take Bayer,” Trump said. “One aspirin a day. So far, it’s been working. But it’s a great company. So are you going to be investing in the U.S.?”

Werner Baumann responded, “Yes, we are.”

Many executives praised Trump’s administration and promised, like Bayer, to do more.

Of course, not that long ago in Davos, everyone predicted Trump would never win in the first place.

This week, to hear Trump tell it, not only did he come to Davos, but he also made Davos better. Said Trump: “We have a tremendous crowd and a crowd like they’ve never had before.”