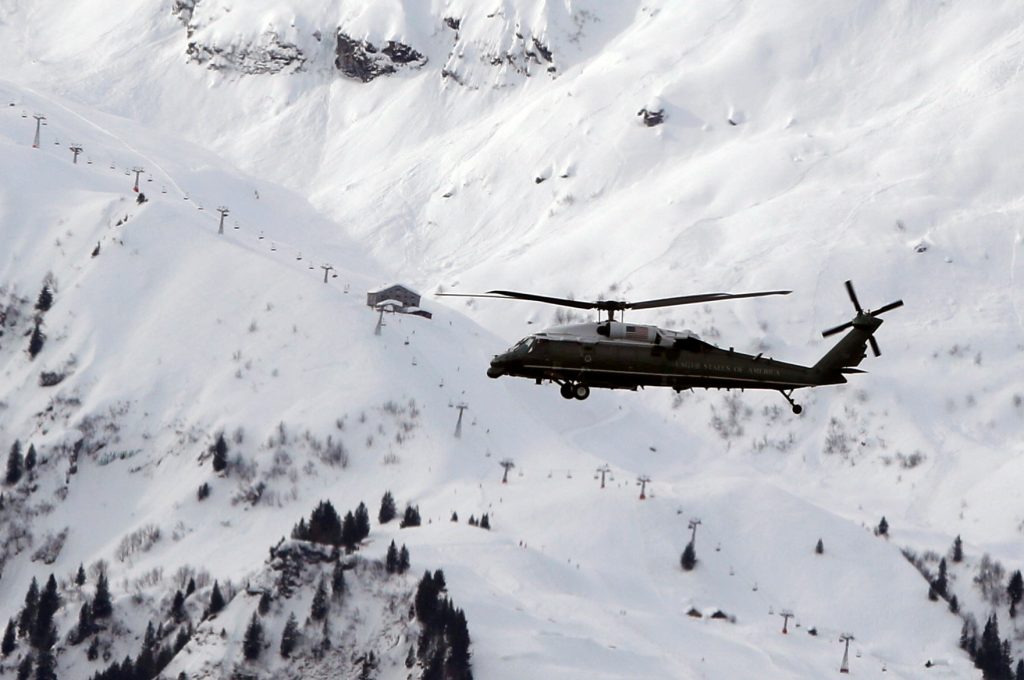 President Donald Trump arrived in Switzerland on Thursday to attend the World Economic Forum where he will push his “America First” agenda and seek more fair, reciprocal trade between the United States and its allies.

Trump arrived in Zurich en route to the Swiss ski resort of Davos for two days of events culminating in a speech on Friday at the forum of business and political leaders.

Trump, never invited as a businessman, will be the first U.S. president to attend Davos since Bill Clinton in 2000.

“Will soon be heading to Davos, Switzerland, to tell the world how great America is and is doing,” Trump tweeted before departure. “Our economy is now booming and with all I am doing, will only get better… Our country is finally WINNING again!”

White House aides said Trump’s message would be the same that he has given during other trips aboard over the past year: The United States wants strong ties with its allies but wants to reduce chronic trade deficits with many of them.

“America first is not America alone,” said White House senior economic adviser Gary Cohn, who is traveling with Trump. “When we grow, the world grows; when the world grows, we grow. We’re part of it, and we’re part of a world economy. And the president believes that.”

In the run-up to his trip to Davos, Trump slapped a 30 percent tariff on imported solar panels, among the first unilateral trade restrictions imposed by the administration as part of a broader protectionist agenda.

Then on Wednesday in Davos, U.S. Treasury Secretary Steven Mnuchin said he welcomed a weakening in the dollar. Fears of protectionist trade policies by the United States had already pushed the greenback to a three-year low, and Mnuchin’s remark pushed it down further.

Trump will use his trip for some diplomacy. He has meetings with British Prime Minister Theresa May and Israeli Prime Minister Binyamin Netanyahu on Thursday and Rwandan President Paul Kagame, current chairman of the African Union, and Swiss President Alain Berset on Friday.

Kagame is a pro-American leader who went to the United States for training when he was in the Ugandan army.

Iran’s growing influence in the Middle East, North Korea’s nuclear challenge and the battle against Islamic State terrorists all figure to be prominent topics of his meetings.

French President Emmanuel Macron told RTS channel that he had “strongly recommended” to Trump to attend the Davos forum during a recent phone conversation they had on Iran … “because I think it’s a good thing for President Trump to explain his strategy for the U.S. and the world here in Davos.

“And that he encounters some form of confrontation and dialogue,” Macron said.

Trump will host a small dinner for European business executives on Thursday night.

There is broad concern in European capitals that 2018 could be the year Trump’s bark on trade turns into bite, as he considers punitive measures on steel and threatens to end the 90s-era North American Free Trade Agreement with Canada and Mexico.

Trump will appeal for increased global investment in the United States to take advantage of corporate tax cuts approved by Congress late in 2017 and Trump’s deregulatory policies.

In Davos ahead of Trump’s arrival, U.S. Treasury Secretary Steven Mnuchin said America supports free trade and said Trump is looking out for U.S. interests and its workers.