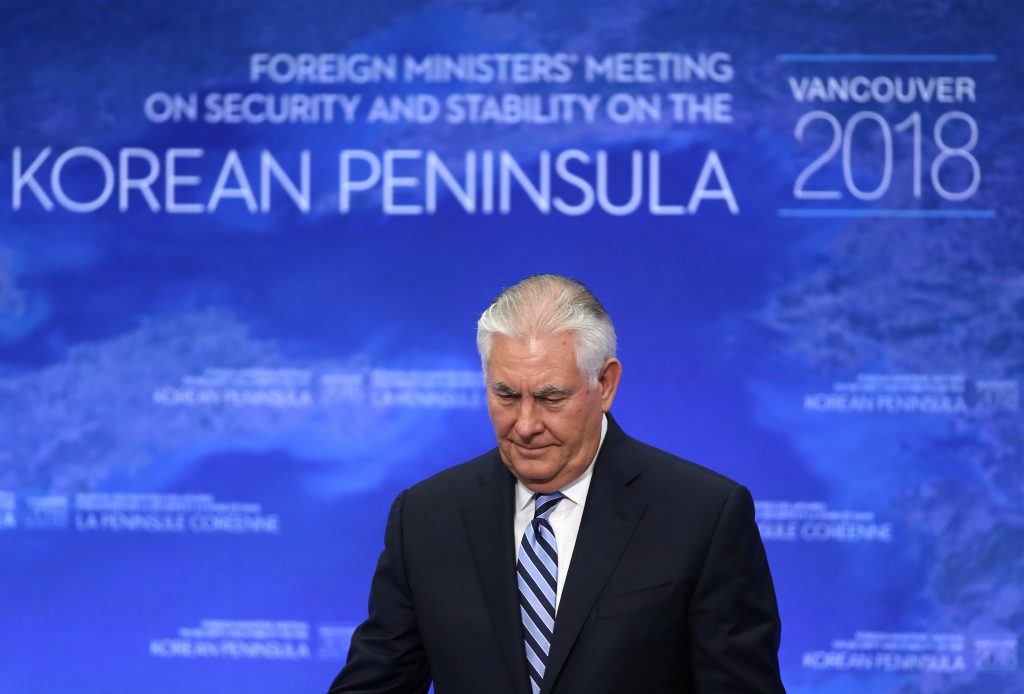 The uncompromising message delivered to a gathering of 20 nations that were on America’s side during the Korean War came despite the recent diplomatic opening between the rival Koreas after a year of escalating tension.

“We must increase the costs of the regime’s behavior to the point that North Korea must come to the table for credible negotiations,” Tillerson said in his opening remarks at the meeting on Canada’s western coast. The meeting convened days after a mistaken missile alert caused panic on Hawaii, a stark reminder of the fears of conflict with the North.

South Korean Foreign Minister Kang Kyung-wha said its talks with North Korea, leading to its participation in next month’s Olympics being hosted by the South, are a “significant first step toward restoring inter-Korean relations.”

But she conceded that despite the overtures, North Korea has yet to show any intention to fulfill its obligations on denuclearization of the Korean Peninsula.

Japanese Foreign Minister Taro Kono was blunter. He said the North “wants to buy some time to continue their nuclear and missile programs.”

The meeting is being attended by foreign ministers and senior diplomats of nations that sent troops or humanitarian aid to the U.N. Command that supported South Korea in the fight against the communist North and its allies during the 1950-53 Korean War. It’s a diverse gathering of mostly European and Asian nations, as well as Australia, New Zealand and Columbia.

Officials are discussing sanctions, preventing the spread of weapons by North Korea, and diplomacy.

The gathering, co-hosted by Canada and the U.S., is strongly opposed by China and Russia, which fought on the communist side in the war. It appears primarily symbolic and unlikely to break much new ground.

Although Tillerson said the meeting sends North Korean leader Kim Jong Un a unified message that a nuclear-armed North is unacceptable, it risks alienating Beijing and Moscow. They are Pyongyang’s main trading and diplomatic partners, but have nevertheless supported U.N. Security Council resolutions to restrict revenue for North Korean nuclear and missile development.

Tillerson called for China and Russia to fully implement the sanctions. He reiterated U.S. opposition to their idea of a “freeze-for-freeze,” whereby the U.S.-South Korea military exercises would halt in exchange for suspension of the North’s nuclear programs.

Tillerson said all nations must work together to improve maritime interdiction operations and stop illicit ship-to-ship transfers that violate U.N. sanctions. The U.S. has previously highlighted efforts by North Korea to circumvent restrictions on supplies of oil and petroleum products, most of which are supplied by China.

The latest U.N. Security Council resolution, adopted in December in response to an intercontinental ballistic missile test, calls on member states to impound vessels in their ports if there are reasonable grounds to suspect illicit trade with North Korea. It authorizes interdictions in a member state’s territorial waters.

“North Korea’s willingness to launch missiles at any time presents a threat to people of all nationalities in the region’s airspace each day,” he said.

Despite Washington’s tough stance and determination to keep up the pressure on North Korea, President Donald Trump has signaled openness to talks with North under the right circumstances. After months of insults and blood-curdling threats he’s traded with Kim, Trump suggested in an interview last week that the two leaders could have a positive relationship.

But Kim, widely viewed as seeking to drive a wedge between the U.S. and South Korea, shows no sign of making concessions toward Washington as his totalitarian government comes close to perfecting a nuclear-tipped missile that could strike the United States.