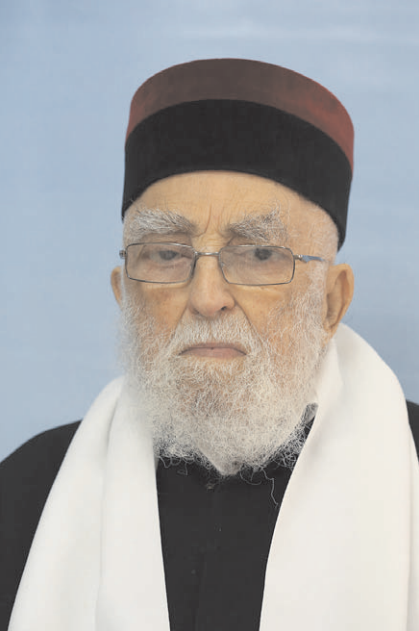 He was born in Sefrou, Morocco, on 11 Teves 5678 (1917), to his saintly father Chacham Rafael Maman, zt”l, known to all as “Rafael Hamalach.” The city of Sefrou, adjacent to Fez, was renowned for the generations of gedolei Torah from the Maman family who resided there, a distinguished family that traces its lineage back to the Rambam, Rabbeinu Moshe ben Maimon.

As a child, he stood out with his considerable accomplishments in learning, beginning his Torah studies in the local Talmud Torah Eim Habanim, then joining the yeshiva of Harav Dovid Atar, zt”l, one of the greatest Torah sages in Morocco. Harav Maman later described how after the seder in yeshiva was over, Harav Atar would bring the talmidim to his house at 8PM, where they would continue learning before davening Maariv and going to sleep there, then he would wake them up again at 2AM and learn Gemara with them until Shacharis before returning to the regular seder in yeshiva. Later Harav Maman himself would conduct himself similarly with his talmidim in Morocco.

At 15 his family pressured him to learn a trade, and he apprenticed himself to a carpenter, but his mind was elsewhere, plumbing the depth of Shas, and he returned home insisting that he rather live in poverty if it meant being able to learn without distractions. Harav Maman would later say that he witnessed the words of the Mishna, Whoever fulfills the Torah in poverty, will ultimately fulfill it in wealth, as he later enjoyed senior Rabbinical positions in Nahariya and Beer Sheva, later joining the Beit Hadin Harabbani Hagadol.

After learning for three years at the yeshiva of Harav Dovid Atar, he joined the yeshiva of his father, Harav Rafael Maman. He spent twelve years learning with his father and under his guidance, covering Bavli, Yerushalmi, Shulchan Aruch with commentaries, as well as other complex subjects like the Hebrew calendar.

At eighteen he began getting involved in halachic matters in his city, being certified as a shochet and mohel, establishing shiurim in the evening in his home for working people and giving well-regarded drashos on Shabbos.

At 28, he set out for the capital city of Rabat, where he wished to prepare himself for a test for dayanus which per the rules was only given after age thirty. Upon arriving and meeting the bochen, deputy chief Rabbi of Morocco Harav Shaul Ben Danan, Harav Ben Danan was impressed by the young Harav Maman and suggested that he could take the test immediately and receive dayanus right away if he passed. Without preparation, Harav Maman took the test, completing it in an hour and a half, well short of the allotted eight hours. Harav Ben Danan was deeply impressed, gave him smicha for dayanus and exclaimed that Harav Maman would yet be a great light for Moroccan Jewry.

He returned to Sefrou where he served as a young Rav and Dayan, and was soon promoted to deputy Rav-Av Beis Din in the capital city of Rabat, where he served among the elderly and distinguished rabbanim and dayanim of Morocco. He was on track to be appointed chief Rabbi of all of Morocco but in 5728 (1968) he traveled to Eretz Yisroel leaving everything behind, because of kibbud eim, joining his mother there to take care of her.

Harav Yizchak Nissim, then-Sephardic chief Rabbi of Israel, suggested that Harav Maman accept an appointment to serve as the head of the Beis Din in Haifa for Gittin, but Harav Maman refused, saying that in Morocco he’d never written a get because he always endeavored to bring peace between spouses, and did not wish to get involved in that now. Harav Nissim accepted his response and arranged for him to be appointed Rav of Nahariya.

Wherever Harav Maman lived, he endeavored to endear the Torah to whomever he came in contact with, whether in the course of complex dinei Torah, by means of his drashos, or through gathering youth whose homes were distant from Torah observance and learning with them until they were transformed into bnei Torah and yirei Hashem.

Harav Maman made a great contribution to the field of Torah scholarship, in his renowned works such as Sdei Yehoshua, Shaar Yehoshua, and many more, written in the characteristically rich Hebraic style of Sephardi Rabbanim.

In 2012, during an Islamist shooting attack at the Ozar Hatorah School in Toulouse, France, eight-year old Miriam Monsonego, Hy”d, daughter of the school principal and Harav Maman’s granddaughter, was among those killed. When Harav Maman was apprised of the terrible news, he stated that we must accept Hashem’s decrees whether they’re good or bad, and a number of minutes later stated that Torah is the source of our comfort, and resumed learning.

In recent days Harav Maman had felt unwell and had been hospitalized, and was then released from the hospital when his condition appeared to improve. On Friday night, his neshama returned to its Maker at his home in Yerushalayim. He leaves behind many descendants continuing in his path in Rabbanus and spreading Torah, great-grandchildren and great-great-grandchildren.