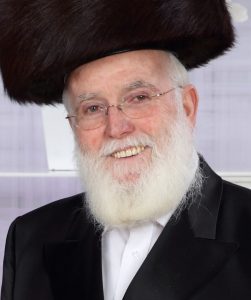 The Boro Park community was shocked to learn of the sudden passing of Rabbi Elchanan Silber, z”l, of Khal Chassidim. He was 69.

Rabbi Silber was born in 5708 (1948) in Teveria. His father was Reb Meir Aryeh Yehudah Silber, z”l, the son of Reb Azriel Chaim Silber, z”l, a Gerrer Chassid from Poland.

On his mother’s side, he was the eighth generation to be born in Teveria, two of his ancestors having participated in the famous aliyah in 5537 (1777) of distinguished Chassidim to Eretz Yisrael led by the tzaddik Harav Menachem Mendel of Vitebsk, zy”a.

One of those ancestors was a Chassid by the name of Reb Michel Shochet, z”l, who had the distinction of being the shochet for Harav Mendel of Vitebsk, a position that testifies to his enormous stature.

As a child, he learned in Teveria, where his mother’s father, a Boyaner Chassid, was a melamed. At the time, Slonim was a large and influential kehillah in Teveria, and he along with his older brother, now renowned as Harav Michel Zilber, shlita, Rosh Yeshivah, Yeshivas Zhvill in Yerushalayim, were drawn to Slonim and became lifelong Slonimer Chassidim.

He then made an American shidduch, marrying the daughter of the Volya Rav, Harav Naftali Klein-Laufer, zt”l, who led the Khal Chassidim shul in Boro Park for many years. Harav Klein-Laufer was a scion of Nadvorna, and his Rebbetzin descended from, zy”a, the Baal Shem Tov, Harav Pinchas of Koritz, and Harav Nochum of Chernobyl.

Rabbi Silber started out as a melamed, a position he held for many years. Later he was involved in shiurei Daf Yomi, first being an intermediary between his distinguished brother Harav Michel Zilber and Rabbi Eli Teitelbaum, z”l, creator of Dial-a-Daf, enabling his brother’s shiurim to reach a large audience and, later, filling in when necessary, and proceeding to give shiurim of his own as well.

He was a maggid b’chessed Elyon, and there was great anticipation to hear him deliver his outstanding talks when he was slated to speak at a simchah. He always had a dvar Torah to share (and always was eager to hear as well), and it wasn’t just some expendable vort, but it would have real depth, seeking out the truest pshat on whatever the subject.

He imbued his family with the importance of true avodas Hashem, of davening properly, of serving Hashem with emes and pnimiyus and eschewing chitzoniyus.

His Shabbosos and Yamim Tovim were a trip to another realm, drawing everyone in for many hours on end with beautiful zemiros and divrei Torah, just pure ruchniyus.

As a Slonimer Chassid, he davened in the Slonimer shtiebel in Boro Park, where everyone considered him their closest friend, and he was very close to, ybl”c, the Slonimer Rebbe, shlita.

In the last 20 years, Rabbi Silber became renowned in Boro Park as a baal chessed par excellence, dedicating time and effort to helping people afflicted with illness, and being involved in hachnasas orchim and chessed.

At any given moment, he could be found assisting patients with getting appointments with the right doctors and receiving treatment in the right hospitals. He was instrumental in assisting hundreds of cholim, perhaps thousands. Fortunate was the patient whom he took on as a project, because that meant having everything cared for, from A to Z, whether it was being picked up from the airport, to being set up with the right doctor, to being helped with insurance, to being provided with a place to stay, to being fed a hearty meal.

His home was also open, with some turning their stay into a sojourn in his house for extended periods of time. There was a family that moved into his house for years, even bringing their children to join them. At the nichum aveilim in Eretz Yisrael following his petirah, the Slonimer Rebbe, shlita, paid a visit and said he cannot recall any other individual who rose to this unparalleled level of chessed.

His sudden petirah last week came as a great shock to the many who depended on his generosity and assistance.

The levayah began Wednesday afternoon at Shomrei Hadas, then continued in Yerushalayim from the Shamgar Funeral Home and passed through the large Slonimer beis medrash on the way to Har Hazeisim.

He is survived by, ybl”c, his wife, son, daughters, grand- and great-grandchildren, as well as his brothers. His brothers are sitting shivah in Yerushalayim, while his wife and children returned to sit shivah at their home in Boro Park until Wednesday.