Community Rectifying a ‘Gross Miscarriage of Justice’: An Interview With Michael B. Mukasey
Community 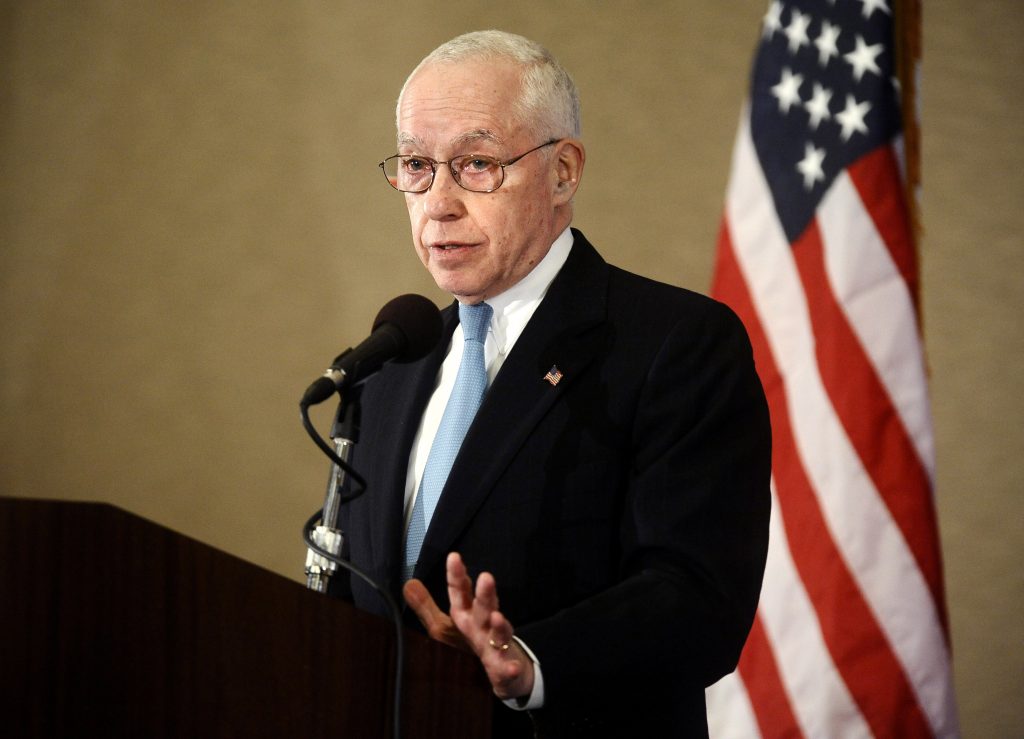 Of the many legal and political officials who worked to free Sholom Mordechai Rubashkin during the past eight years, among the most prestigious and most dedicated was Michael B. Mukasey, former federal judge and U.S. Attorney General.

On Thursday, eight days after Sholom Mordechai was freed, Judge Mukasey – who, Apfel cautioned this reporter, is a man of extreme humility – spoke with Hamodia about his efforts to rectify what he deemed a “gross miscarriage of justice.”

When and how did you first get involved in the Rubashkin case?

It has to have been a couple of years ago. I got a call from Gary Apfel, who is a lawyer out on the West Coast, telling me about the case and asking me to get involved.

I reviewed some material and realized that it had been a really gross miscarriage of justice.

The injustice consisted of two things; I don’t recall seeing evidence of the second immediately, although I did see it later on. One was the disproportionate sentence, which was just way out of line with anything that had ever been done in any similar case and with anything that was warranted. And secondly, the thing that very much upset me was the fact that the prosecutors apparently had purposely interfered with the ability of the company to have somebody acquire it at a reasonable price, by essentially ruling out the possibility of anybody in the family being associated with the company, which diminished its value, which increased the damage, which then drove the sentencing guidelines.

They sabotaged his ability to salvage anything, and then put on perjured testimony to lie about it.

You’re referring to the testimony of Paula Roby [attorney for the bankruptcy trustee]?

That just got to me. That was absolutely indefensible.

What do you think of Judge Linda Reade’s conduct throughout the case?

I don’t know what her conduct was like during the case because I haven’t really examined that. The only thing I can tell you is that when facts were brought to her attention, I find it inexplicable that she essentially refused to hold a hearing and just summarily dismissed any claim relating to the obvious impropriety that had gone on.

You’re talking about after the initial sentence was handed down?

And the initial sentence, going above the recommended guideline range is, I think, a clue that there is something inexplicable going on. It is inexplicable if you refer to the usual range of things that happen in a case.

When you put it all together, the only conceivable explanation is that it is a manifestation of anti-Semitism. I can’t think of any other factor that would account for everything that she did.

Anti-Semitism on the part of Judge Reade and the prosecution?

You were a federal judge for 18 years. Did you ever give a sentence higher than what the prosecution asked for?

In my district [the Southern District of New York], the prosecution never requested a particular sentence. Never. It just wasn’t done. And I consider it generally a bad idea for prosecutors to take a position on a sentence in any kind of case. It’s not their business.

So once there’s a conviction, the sentence is totally left to the judge – is that a Southern District rule?

It’s not a rule; it’s a practice. The U.S. Attorney’s Office in the Southern District used to resist, all the time, making any recommendation with respect to sentence. Sometimes, when defendants cooperated, judges would request a recommendation from the prosecution. But the fact is, prosecutors have very little to teach judges about sentencing. That’s supposed to be a judicial function, not a prosecutorial function.

There are around 200,000 federal prisoners in the United States. What was it about this particular case that motivated you to become so involved and dedicated to it?

I became aware of the issue, and I became aware of what I regarded as not only the overreaching and dishonesty, but of the apparent anti-Semitism. I am a Jew. When you put all those things together, I regard it as entirely natural for me to have been involved.

There were many people involved in this – in addition to the Jewish organizations – from the legal and political world, across the political spectrum.

And I helped get some of them. I felt it was perfectly fine for me to call people and explain what was going on here and why they should get behind it.

Who were some of the people you brought into the case?

Rudy Giuliani was one.

In addition to bringing in people, you were also were involved with the legal appeals?

I don’t know that I was involved with legal appeals.

There was a letter drafted [in April 2016] to Kevin Techau, the U.S. Attorney for the Northern District of Iowa, to reconsider [the Rubashkin case]; it didn’t go anyplace. I wasn’t the initial pen on that, but I did review it and made some suggestions.

The efforts to have the sentence commuted began during the Obama Administration. But during a campaign stop in Iowa in 2008, Obama had criticized Agriprocessors. Did anyone believe that there was, realistically, a chance that Obama would commute the sentence?

I have no idea. I was not directly involved in trying to bring it to his attention. My understanding was that it went through the Justice Department, and that James Cole, a deputy attorney general, had given it the brush-off, and that later on, they were reluctant to review what he had done.

When Cole left office, and when Attorney General Eric Holder left office and was replaced by Loretta Lynch, they were reluctant to go against what he had done before. This is what I heard; I don’t know it firsthand.

I thought that it should have been considered on the merits, not on a question of whether he had or hadn’t passed on it.

So as far as you know, the efforts to free Rubashkin during the Obama Administration went through the Justice Department and not to the president directly?

They may have gone to the president directly. I don’t know that firsthand. I heard that they did.

Then, in November 2016, Donald Trump was elected president. On January 18, even before his inauguration, you sent him a letter asking him to commute Rubashkin’s sentence. Was there a belief, as soon as he was elected, that now there’d be a chance of getting a commutation?

I believed that. In fact, what I thought he should have done during the campaign was to call attention to what an outrage it was, and to say essentially that President Obama should act on it, and that if he doesn’t act on it, that Trump will act on it if he gets elected. That was an argument that should have been made, but I don’t think it was.

Can you discuss your efforts with the Trump Administration in addition to writing these letters to the president? You had some connection with the White House counsel.

When did you know that the commutation was going to happen?

A day or two before it happened.

I’d heard that it was in the works, that it was being considered and so on, but I did not know until a day or two before.

Since he was freed, have you spoken to Sholom Mordechai?

I have not, although I’m going to be seeing him in about a half-hour! His family is coming down from Spring Valley to stop in for a visit.

So I don’t think that was the problem.

In general, do you believe that the sentencing guidelines need reform?

I think that in some respects they do. My own view is that for the sentences way at the high end, there’s no evidence as far as I know that a 20-year sentence gets you appreciably more than a 15-year sentence gets you, as far as the interest of law enforcement is concerned. And I think that the cost, particularly of maintaining elderly prisoners, is such that if you want to save money someplace, that’s where you save it.

So you believe generally that there should be shorter sentences?

I believe that at the top end, some change would be appropriate, on a careful basis.

Any final thoughts on the Rubashkin matter?

I find it a very distressing chapter in U.S. legal history, and hope that nothing like it ever recurs.