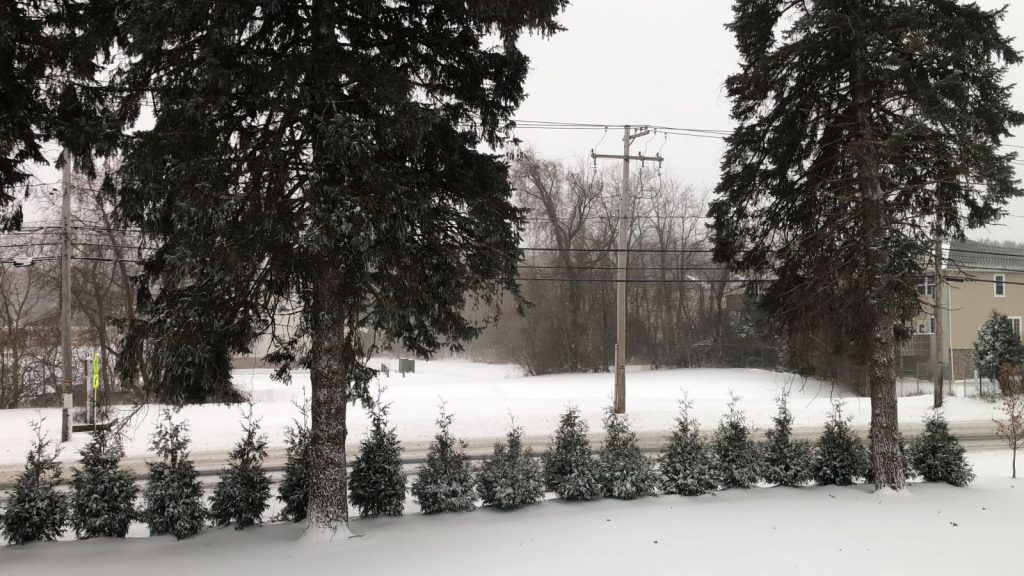 Schools were closed but businesses were open in Monsey yesterday as a severe snowstorm slammed New York.

On Wednesday afternoon, the East Ramapo Central School District (ERCSD) had put schools on notice that Thursday would be running on a two-hour delayed start — meaning that 8:30 a.m. bus pickups would now happen at 10:30 a.m. But rapidly changing weather conditions changed that.

Early Thursday morning, the District made the call to close schools for the day. Monsey’s extensive presence of private schools shortly followed suit.

Some parents may have groaned, but many children thrilled at the prospect of a “snow day” off from school, snugly indoors in their beloved homes.

Roads were passable but visibility was poor Thursday morning around 9:45 a.m. as this writer made his way to work by taxi. A sole private school bus was seen on Monsey’s central College Rd. artery.

A Spring Valley resident and Monsey developer reported that he heard of no power outages or downed trees in his mostly Chassidishe neighborhood of Monsey’s central Maple Ave.

He likewise reported no weather-related damage to any of his properties — but did note that the extreme cold had been causing “freeze-ups” of pipes at several. Those were shortly tended to.

The real-estate businessman reported a “slow day” at work, saying that most Monsey businesses had opened, but with staff on site reduced due to travel difficulties.

The businessman himself had enough trouble driving up Maple Ave.’s hill just east of Monsey Blvd. in the slippery morning snow. “I wish I had a four-by-four,” he said.

“Very little traffic” was seen all day on Wilder Rd., a primary thoroughfare of Monsey’s northern Wesley Hills neighborhood, reported one resident. “But there was lots of wind.”

Those gusts, which official weather reports clocked at close to 50 miles an hour, had trees audibly groaning, reported the resident.

What about snow? “It’s definitely piling up,” she said.

Much more adverse than the snow was the wind-whipped cold. The resident reported her back-porch sliding door frosted over, with conditions right for the chilled condensation to form where cold abruptly meets warm.

Frosted windows were seen as well by this writer at his office on Monsey’s central Route 59 — where traffic proceeded all day, albeit at a significantly dampened pace due to the forbidding wind and cold.

The southwestern Monsey neighborhoods of Airmont and Suffern were uneventfully affected by the storm, reported a Suffern resident. “The roads are basically empty,” she said. “Windy, snowy.”

Meanwhile, how were the children enjoying their day off from school?

The Wesley Hills resident spoke for herself — and arguably for many fellow Monsey mothers: “They’re entertaining themselves.”