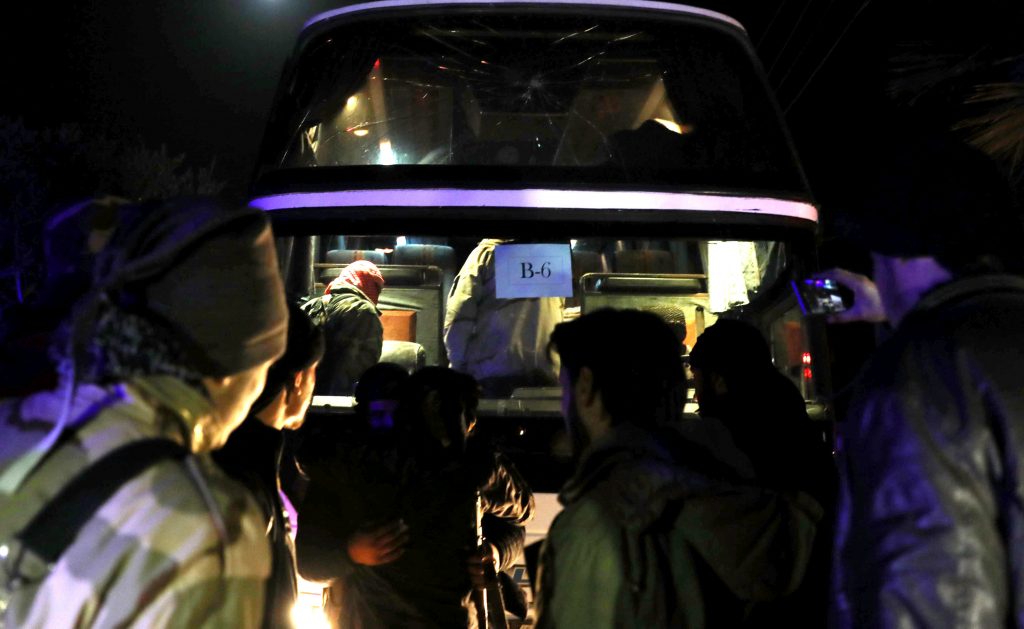 Dozens of Syrian militants and their families departed aboard buses from an area besieged by government forces near the Golan Heights early Saturday, part of a deal to clear yet another district of insurgents.

The evacuations came as government-controlled media said two mass graves were discovered in the northern province of Raqqa where the Islamic State group held sway for more than three years.

On Friday, Syria’s state news agency SANA said some 300 al-Qaida-linked militants and their families would be sent to Daraa and the northwestern province of Idlib.

The evacuation allows the government to reassert control over Beit Jin near the Golan Heights that were captured by Israel from Syria during the 1967 Mideast war.

Israel has publicly warned against the accumulation of Iranian and Iranian-backed forces at its border. Iran has arranged for thousands of militiamen from across the region to fight on behalf of Syrian President Bashar Assad’s government and has sent top commanders to direct its own Revolutionary Guards in the country as well.

In northern Syria, SANA reported that “dozens of bodies” of civilians and troops killed by IS were discovered in two mass graves in the village of Wawi near the northern city of Raqqa, once the de facto capital of IS.

IS carried out public killings in its once self-declared caliphate, beheading, shooting and stoning perceived offenders to death, as well as drowning them in large pools while locked in metal cages.

SANA said that after residents returned to their village some of them received information about mass graves near the village and once a search began the two graves were discovered.

The agency quoted a local official as saying that work is ongoing to remove more bodies, adding they are trying to identify the dead in order to hand their remains over to their families.

SANA posted several photographs showing the remains being unearthed and placed on sheets.