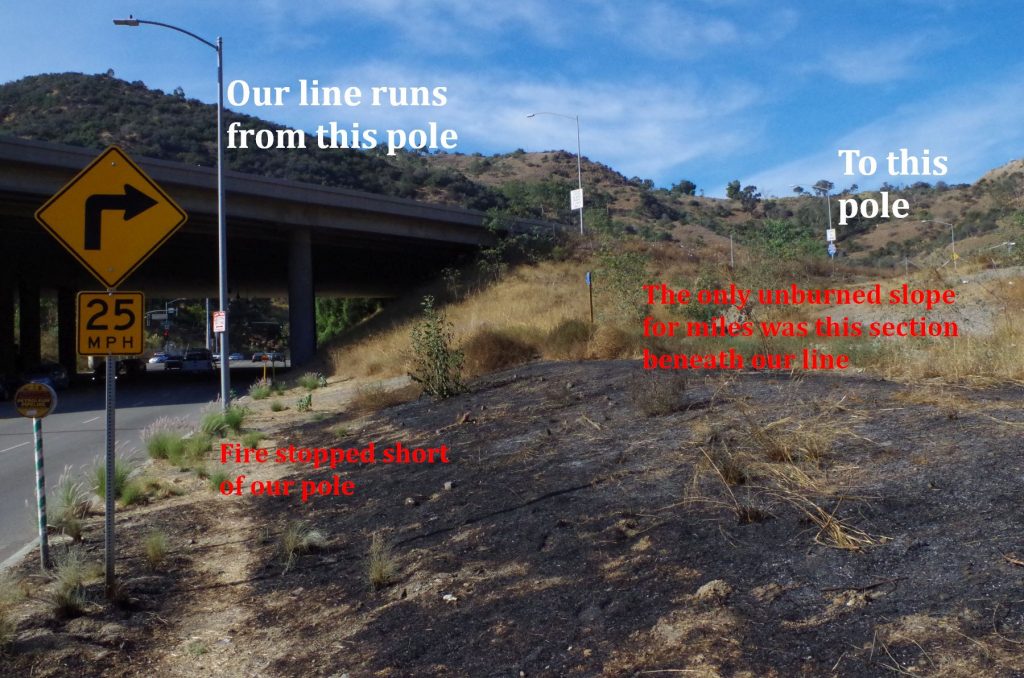 Amid raging wildfires on all sides, the section of the Los Angeles eruv that cuts straight through one of the most affected areas was left scorched, but tact and operational.

Earlier this month, several spots in southern California were hit by massive wild fires which left much destruction in their wake. The one closest to the Los Angeles metropolitan area, dubbed the “Skirball” fire, burned much of the area including the hillsides around the Sepulveda Pass which serve as the eruv’s western border.

With the area closed to all but emergency personnel, the team responsible for checking the eruv had assumed that it would be impossible to verify it’s kashrus for the coming Shabbos. However, when the area was opened to the public the following Wednesday, they were taken aback by what they found.

“The chain link fence and some of the other fences we use for the boundary were blackened, but they all stood. What’s more amazing in the spot where we use fishing line to cross the road near the freeway, the fire stopped two feet in front of the pole,” Howard Witkin, of the Eruv Committee who was among those who inspected the site, told Hamodia. “Just to the north, we have plexiglass lechis and poles that could have just melted or gotten cut through by firemen, but they all were unscathed.”

After the inspection, which the committee carries out before each Shabbos, Mr. Witkin said that there were no more repairs that had to be done than on a normal week, as the large communal eruv requires maintenance on a regular basis. Contrary to their assumptions, they happily announced to the community that the eruv would indeed be useable for the coming Shabbos.

“We didn’t miss a week,” said Mr. Witkin. “Rav Noach Weinberg, zt’l, said that nature is just a miracle that you’re used to seeing, but it’s nice to see it clearly once in a while. Hashem is always talking to us; you have to be listening.”