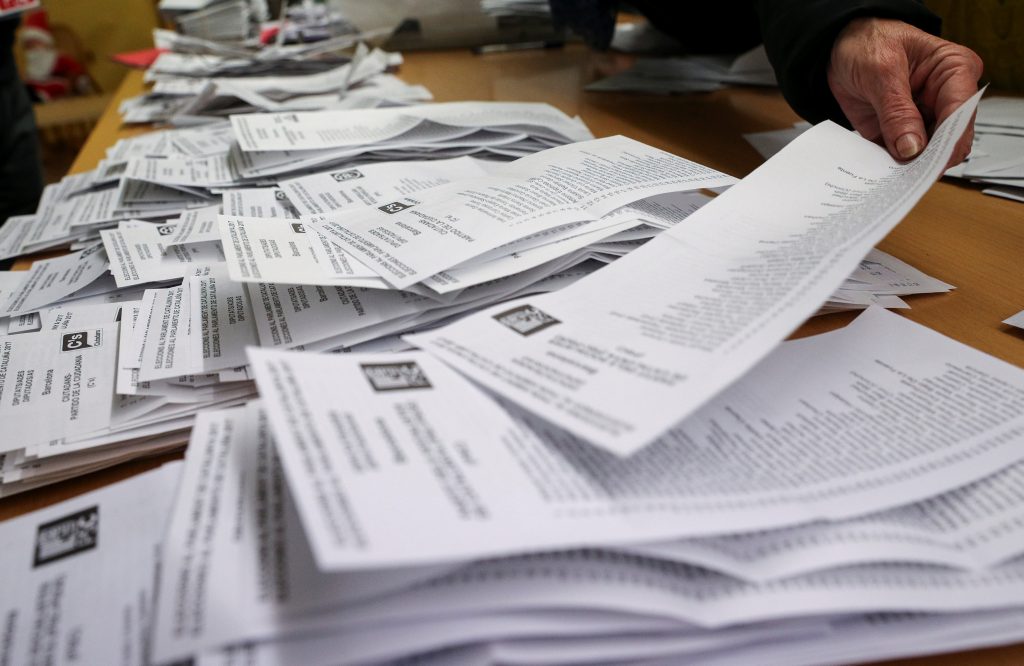 Voters in Catalonia faced a momentous choice in an election Thursday for their regional parliament: Either support political parties that are determined to keep up the pressure to turn their region into Europe’s newest country, or opt for those that want it to stay as part of Spain.

The pivotal election is aimed at breaking the bitter deadlock over the issue of secession. But neither side is likely to win a clear majority in the new regional parliament, setting up a scenario of long and challenging negotiations to form a new Catalan government.

Opinion polls have shown fugitive and jailed separatist candidates neck-and-neck in opinion polls with those who want to keep Spain together, who claim to be in the best position to return Catalonia to stability and growth.

But with a record turnout expected, the outcome could hinge on the more than one-fifth who are undecided among Catalonia’s 5.5 million eligible voters.

Weeks of campaigning involved little debate about regional policy on issues such as public education, widening inequality and unemployment. At the heart of the battle instead was the recent independence push that led to Spain’s worst political crisis in decades.

Separatist regional lawmakers made a unilateral declaration of independence on Oct. 27, prompting Spain’s national government to take the dramatic step of firing the regional government and dissolving the Catalan parliament. Courts later ordered the arrest of the former Catalan leaders.

Spanish Prime Minister Mariano Rajoy called the early election, which he is hoping will keep the separatists out of power. The strategy could backfire, however, if the election delivers a pro-independence majority of lawmakers in the Catalan parliament. Even so, Rajoy says Catalan independence would go against the Spanish Constitution and he refuses to accept the possibility.

The separatists are equally uncompromising.

Carles Puigdemont, the fired former president of Catalonia, chided Rajoy’s government for ousting him and other separatists. Puigdemont is in Brussels, where he is a fugitive after evading a Spanish arrest warrant, though he is running in the Catalan election from there as leader of Junts per Catalunya (Together for Catalonia).

“It’s not normal, an election that takes place with candidates in prison and candidates in exile,” Puigdemont said in the Belgian capital. In a tweet, he thanked an 18-year-old woman who cast a vote on his behalf in a town near Barcelona.

Ines Arrimadas, leader of the pro-Spanish unity party Ciutadans (Citizens), said she wanted to end the bitter disputes over independence that have divided Catalans and caused upheaval.

“We are going to fight very hard for Catalonia to return to normalcy,” Arrimadas told reporters after casting her vote in Barcelona.

Across the Catalan capital, citizens lined up to cast their votes.

Manuel Abella, a 64-year-old retiree, said he voted for Ciutadans, which has fared well in polls. Abella said he didn’t like how the split between separatists and pro-unity Catalans has become so unpleasant.

“The problem we have is that now people are divided: You are either with us or against us,” he said. “I have experienced this in my own family. We have arrived at the point that we can’t talk politics now.”

Sergi Balateu, a 37-year-old marketing director, voted at Barcelona’s Ramon Llull school, where less than three months ago police in riot gear used force to stop him and others voting in an independence referendum that the Spanish government had said was illegal.

Balateu said he voted for Together for Catalonia. “It is a strange feeling to vote here today,” he said, because of the memories of the October clash, when he and other separatists held hands and tried to protect the referendum ballot boxes.

“For me it is a question of identity. I feel more Catalan than Spanish,” he said.

A Catalan attempt to secede would be an unwelcome development for the European Union, which is already wrestling with legal complications from Britain’s planned exit from the bloc. Senior EU officials have backed Rajoy, and no EU country has offered support for the separatists.

Catalonia’s independence ambitions also have scant support in the rest of Spain.

The outcome of the political battle is crucial for a region that accounts for 19 percent of Spain’s gross domestic product.

An economic slowdown has been the most immediate consequence of the Catalan independence push. Spain’s central bank last week cut its national growth forecasts for next year and 2019 to 2.4 percent and 2.1 percent, respectively, cutting a percentage point off its previous predictions and citing the conflict in Catalonia as the cause.

Opinion polls have suggested a close race between the Ciutadans party and the two prominent separatist parties, Together for Catalonia and the left-wing republican ERC party, whose leader and Puigdemont’s former No. 2, Oriol Junqueras, is in jail.

The parties of Puigdemont and Junqueras, along with small anti-capitalist group CUP, held a slim majority in the last parliament, enabling them to push ahead with the independence drive. It remains to be seen whether they can stick together after Thursday.