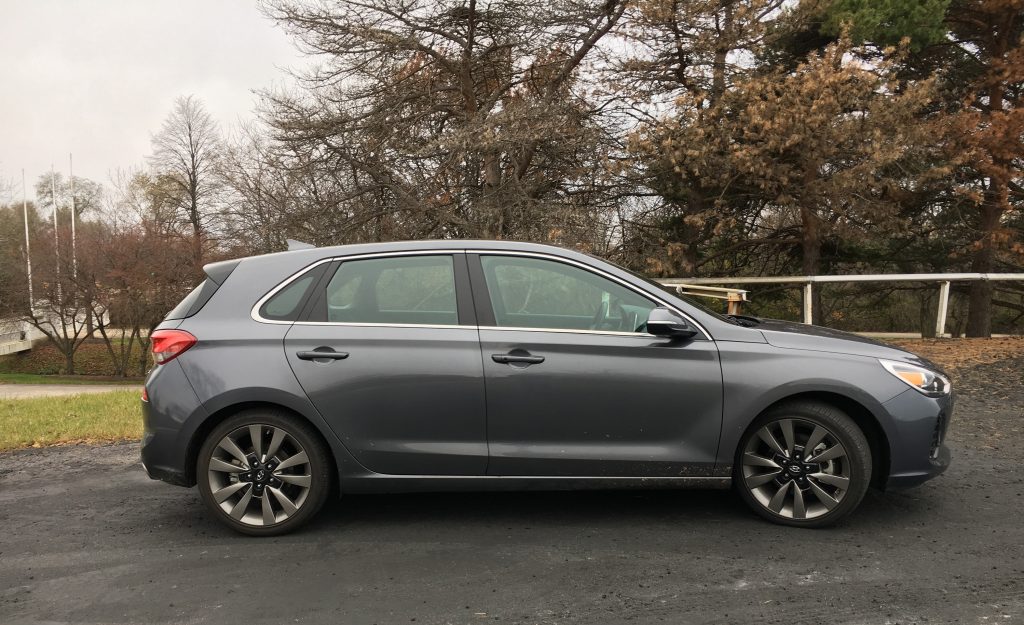 With the 2018 Elantra GT Sport, Hyundai is following in the treads of the Honda Civic with a compelling redesign that offers some five-door fun under the shadow of its taller, duller cousin, the compact crossover.

The second-generation hatchback rebadged from Touring to GT gets a Sport variant for the first time that has a value-to-fun proposition like the Civic Si if the Si came as a hatchback.

The GT Sport is lower, wider and longer than the outgoing Touring model, but shorter than the spacious Civic Hatch. It’s a lot more modest, too, for those who don’t want the attention of a wing, spoiler, and cosmetic rear vents. The front overhang juts out a bit more than competitors, and the face features a broad honeycomb grille spanning a pronounced splitter and side vents with vertical fog lights.

The GT Sport gets 18-inch wheels instead of 17-inch rollers on the GT, and the low-profile rubber contributes to a grippier though louder ride inside.

Red accent stitching on the seats and around the vents, center controls and gear stick make for a sleek visual connection to the rpm gauge. That attention to detail is usually overlooked at this price point.

It’s fun to drive, with modest but sufficient power coming from the 201-horsepower 1.6-liter turbo engine (the base model has a 2-liter four-cylinder). Max torque of 195 pound-feet comes at just 1,500 rpm, and there is little turbo lag with the smooth rowing six-speed manual.

Powering the front wheels, the standard manual has well-defined gates to avoid slipping a shift. The clutch pedal is nicely balanced so it’s not annoying to drive in traffic, and springy enough for spirited driving. Same goes for the seats, snug without being tight, comfy without inducing a nap, even with the heated seats standard on the GT Sport. Handling is Civic-solid, thanks to a multilink rear suspension in the GT Sport that lets each wheel behave independently.

Interior space is where the Civic Hatchback might have an edge. Rear legroom is tight in the GT Sport, and while we were able to fit the hockey bag and a few grocery bags in back, we had to fold down the 60 part of the 60/40 folding seats to schlep around two kids’ worth of weekend activities. Yet I prefer the dual climate zones, controls, and functionality of the GT Sport, even if the kids mocked me for how long it took to find the door lock button in the center controls. The Civic’s touch screen is also better integrated than the GT Sport’s jutting-from-the-dash display.

The biggest edge for the GT Sport over the Civic Hatchback Touring is about $3,000 when similarly equipped. Sure, the Civic has a lot better fuel economy (33 mpg combined, compared with 25 mpg) and a more daring design, but GT Sport upholds Elantra’s pedigree of a value-packed compact with a sporting edge.