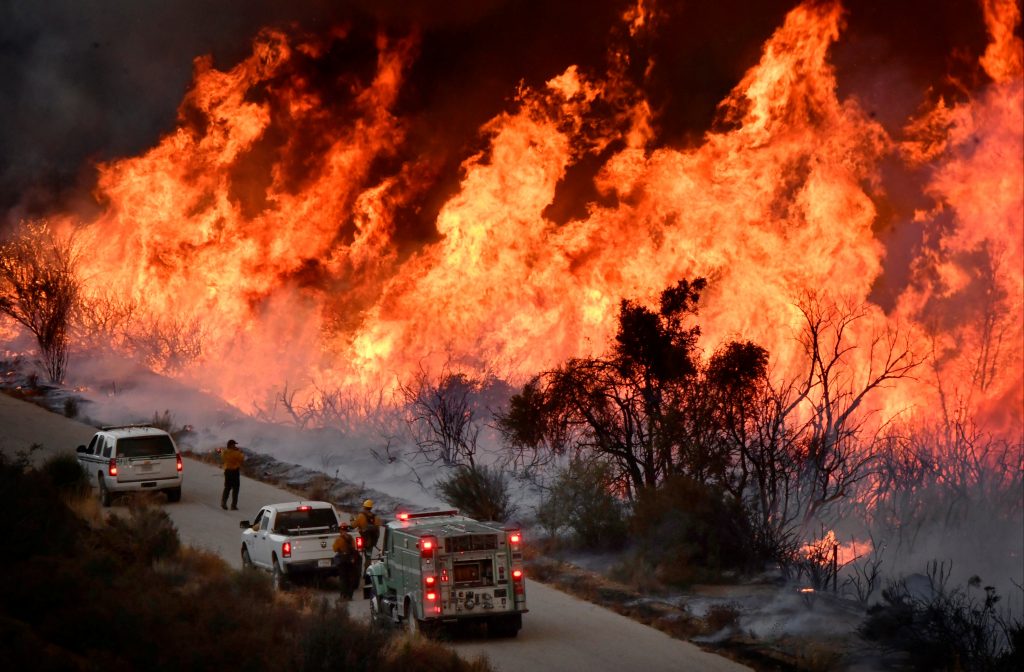 Firefighters across Southern California made progress on Saturday battling a slew of scattered wildfires that have killed at least one person, destroyed hundreds of buildings and forced more than 200,000 people from their homes this week.

As the dry Santa Ana winds that have fueled the blazes abated slightly, officials lifted evacuation orders for parts of Ventura and Santa Barbara counties, and crews started getting the upper hand in containing some major fires.

But with the National Weather Service expecting a pickup in top wind velocity to 55 miles per hour on Sunday from 40 miles per hour, the 8,700 firefighters battling six fast-moving blazes were under pressure to work quickly.

“We’re far from being out of the woods on any of them,” Ken Pimlott, director of the California Department of Forestry and Fire Protection (CAL FIRE), told a news briefing in Ventura.

At an evacuation shelter at the Ventura County Fairgrounds on Saturday, fluorescent lights shone above hundreds of cots set up in rows. Outside, dust and soot made it hard to breathe.

Surah Yasharal and Yaaqub Yoshua were at the shelter with their two toddlers, stuck there since arriving by Greyhound bus from Florida on Friday. They had planned to move into a guest house owned by Yoshua’s employer, but by Saturday they still had not learned whether it had survived.

“If it’s not there when we get there, we’ll go back to the drawing board,” said Yoshua, 26. “We’ll improvise.”

Marie Snyder was at the beach on Monday evening when the fire started. She could not return to her home in the community of Oak View, so she stayed with friends for a few days, coming to the shelter on Friday.

This week’s fires have destroyed nearly 800 buildings, mostly in Ventura County where the Thomas Fire, the largest blaze, erupted on Monday.

Officials said that by Saturday the Thomas Fire had charred 148,000 acres, an area about the size of Chicago. As evening approached, the blaze was most active north of the small city of Ojai, north of Ventura, known for its classical music festival and its spas. Ojai itself was not threatened, officials said.

The fires threatened Californians from Santa Barbara County down the Pacific Coast to Mexico. They have claimed at least one human casualty: Virginia Pesola, 70, died in a Wednesday car accident along an evacuation route from the Thomas Fire.

“The cause of death is blunt force injuries with terminal smoke inhalation and thermal injuries,” Ventura County Medical Examiner Christopher Young said in a statement on Friday.

The fires have threatened property worth billions of dollars, just weeks after October wildfires in Northern California resulted in insured losses of more than $9 billion. Those fires, concentrated in wine country, killed 43 people.

At their peak, this week’s fires drove about 212,000 Californians from their homes. The lifting of several evacuation orders reduced the number of people displaced from their homes to 87,000 on Saturday.

Visibility improved in Ventura early on Saturday, with blue skies returning as strong winds blew smoke out to sea.