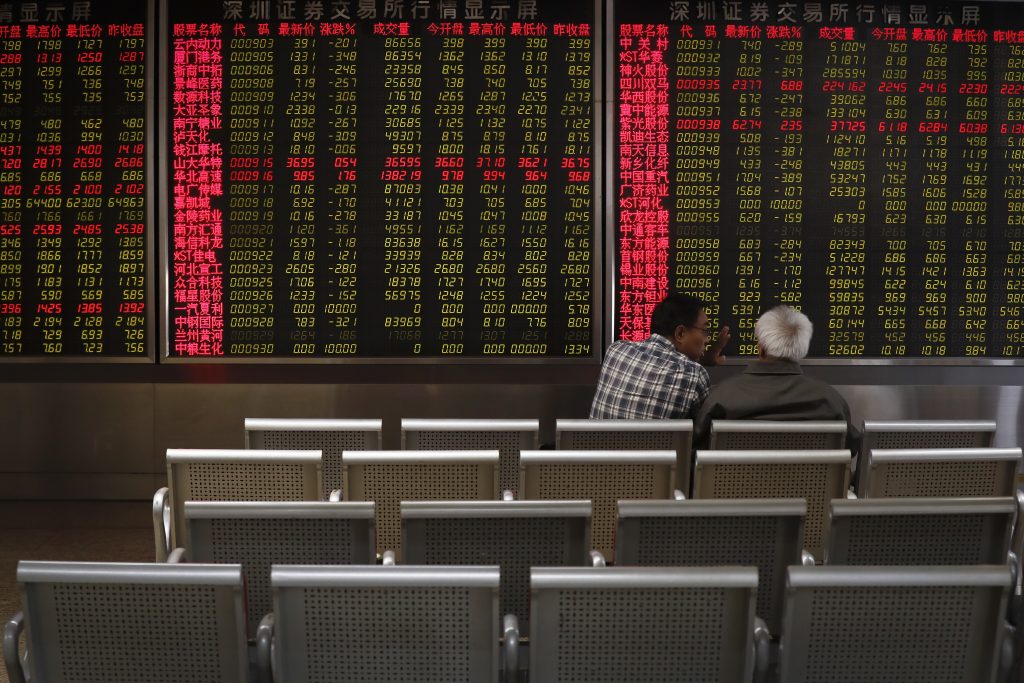 Asian shares hovered above two-month lows on Thursday as some high-tech bellwethers bounced back after a searing sell-off, although softer oil and copper prices and uncertainty over U.S. policy kept many investors cautious.

Major European stock futures are trading higher, with Germany’s DAX futures up 0.4 percent, while those for Britain’s FTSE and France’s CAC were each up 0.1 percent.

MSCI’s broadest index of Asia-Pacific shares outside Japan edged up 0.2 percent as some technology bellwethers rebounded, with Tencent rising over 3 percent and Alibaba more than 2 percent.

The MSCI index has slipped 4.5 percent from a 10-year peak hit on Nov. 23 as investors booked profits after stellar gains this year.

In Japan, the Nikkei jumped 1.5 percent, recouping much of its 2.0 percent loss the previous day, which was its biggest fall since late March.

Investors are looking to final tax reform legislation in the United States, where a potential U.S. government shutdown looms if Congress fails to agree on a spending package.

There are also fears of a violent backlash in the Middle East from President Donald Trump’s recognition of Yerushalayim as Israel’s capital.

“I would say markets are going through a healthy correction after their rallies during the past three months, or six months. I don’t think we need to panic,” said Hirokazu Kabeya, chief global strategist at Daiwa Securities.

MSCI’s gauge of stocks across the globe stood near Wednesday’s two-week low while Wall Street’s benchmark S&P 500 index edged down for its fourth straight session of losses.

Oil prices flirted with two-week lows after a big fall on Wednesday, when a sharp rise in U.S. inventories of refined fuel suggested demand may be flagging, while U.S. crude production hit another weekly record.

Brent futures gained 0.3 percent to $61.42 per barrel, after having fallen to $61.13 on Wednesday, its lowest since mid-November.

The price of copper, seen as a barometer of global economic health because of its extensive industrial use, also fell sharply earlier this week, raising worries about the world growth outlook.

“When you look at growth in China’s industrial output and copper prices over the last 10 years, you could say that copper still looks a bit expensive. I wouldn’t be surprised to see a further drop in copper if investors grow wary of the possibility of slowdown in China’s output,” said Makoto Noji, senior strategist at SMBC Nikko Securities.

In the currency market, the dollar stood near a two-week high against a basket of currencies but lacked momentum as many players looked to see how the U.S. Republicans in the House and the Senate will bridge differences on tax plans.

The dollar eased to 112.53 yen, moving away further from Monday’s high of 113.09, which was its best level in more than two weeks.

The British pound was on the defensive after hitting a one-week low of $1.3358 on Wednesday on concerns a Brexit deal may be unlikely before next week’s key EU summit due to an impasse over the Irish border.

Bitcoin continued to swing wildly, surging 3.5 percent to a new record of $14,199 at one point on cryptocurrency exchange Bitstamp. But by late Asian trade it had pulled back to $13,960, up about 2.5 percent on the day.

Silver extended its decline since late last month to hit a near-five-month low of $15.94 per ounce.