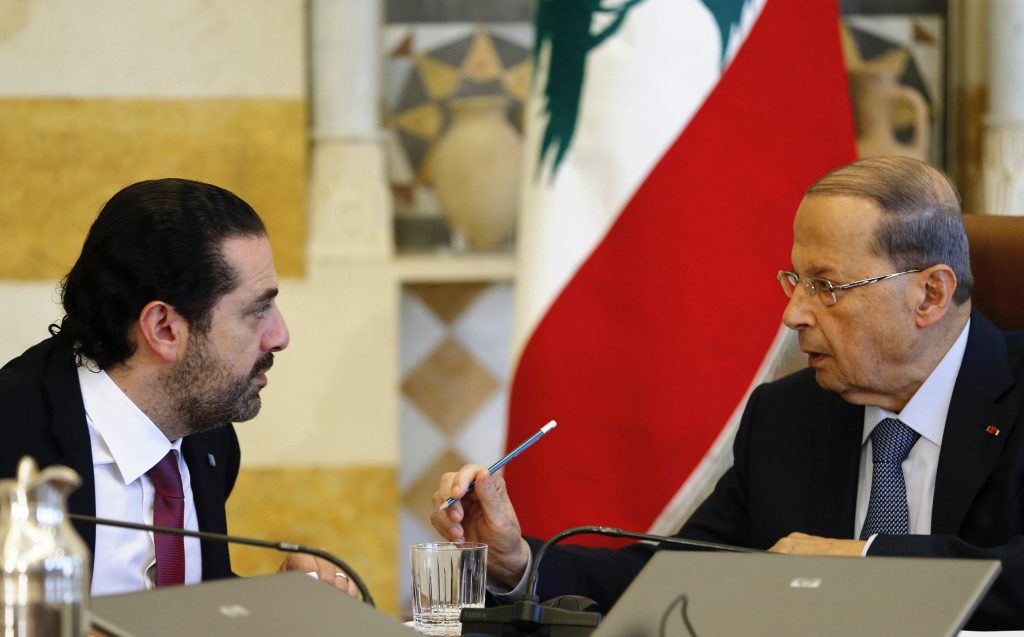 Lebanese Prime Minister Saad al-Hariri rescinded his resignation on Tuesday, drawing a line under a month-long crisis triggered when he announced from Riyadh that he was stepping down and remained outside Lebanon for weeks.

His coalition government, which includes the Iran-backed Hezbollah terror group, reaffirmed a state policy of staying out of conflicts in Arab states. Hariri’s Saudi allies accuse Hezbollah of waging war across the Middle East as agents of Iran.

Hariri’s shock resignation had thrust Lebanon to the forefront of the regional quarrel between Saudi Arabia and Iran, which has been played out on battlefields in Syria, Iraq and Yemen in recent years.

Lebanese officials said Saudi Arabia had coerced Hariri, a long-time Saudi ally, into resigning and put him under effective house arrest until an intervention by France led to his return to Lebanon. Saudi Arabia and Hariri have denied this. President Michel Aoun, a Hezbollah ally, refused to accept his resignation while he remained abroad.

Saudi concern over the influence wielded by Shiite Iran and Hezbollah in other Arab states, notably Yemen, had been widely seen as the root cause of the crisis, which raised fears for Lebanon’s economic and political stability.

The Lebanese policy of “dissociation” was declared in 2012 to keep the deeply divided state out of regional conflicts such as the Syrian civil war. Despite the policy, Hezbollah became heavily involved there, sending thousands of fighters to help President Bashar al-Assad.

In its first meeting since Hariri’s resignation, the Cabinet on Tuesday reaffirmed its commitment to the policy.

“All [the government’s] political components decide to dissociate themselves from all conflicts, disputes, wars or the internal affairs of brother Arab countries, in order to preserve Lebanon’s economic and political relations,” Hariri said.

“The Cabinet thanks its leader for his position and for revoking his resignation,” he added, reading out a government statement that referred to himself.

Lebanon, where Sunni, Shiite, Christian and Druze groups fought a civil war from 1975-1990, has a governing system designed to share power among sectarian groups.

Hariri, a wealthy Sunni businessman with financial interests in Saudi Arabia and long ties to the kingdom, had denounced Iran during his resignation speech and said he was outside Lebanon because he feared for his family’s safety. His father, a former prime minister, was assassinated in 2005.

In a speech during the Cabinet session, Hariri warned that the tensions in the region could easily drag Lebanon down a dangerous route, and the issues which had led to the crisis cannot be ignored.

“Developments in the region suggest a new wave of conflict … Perhaps the conflict is nearing the end, and Lebanon cannot be plunged into chaos on the finish line,” he said.

“The attack on Gulf states in the media and politics is an issue which threatens Lebanon’s interests and especially the interest of Lebanese working in the Gulf,” he said.

“If we are rejecting interference by any state in Lebanese affairs, it cannot be that we accept that any Lebanese side interferes in the affairs of Arab states,” he said, an apparent reference to Hezbollah.

“We have to address this issue, and take a decision announcing our disassociation, in words and deeds. We must be convinced that interfering in the internal affairs of the Gulf States has serious repercussions on our situation and our interests,” he said.

Hariri’s resignation was accompanied by a sharp escalation in Saudi statements targeting the Lebanese state, with Riyadh at one point accusing the Beirut government of declaring war against it. Western governments, including the United States, stressed their support for Hariri and Lebanon.

Before leaving Riyadh, Hariri said Lebanon was at risk of Gulf Arab sanctions because of Hezbollah’s regional meddling.

He indicated the livelihoods of hundreds of thousands of Lebanese in the Gulf could be at risk, as well as trade, vital to the stability of the Lebanese economy.