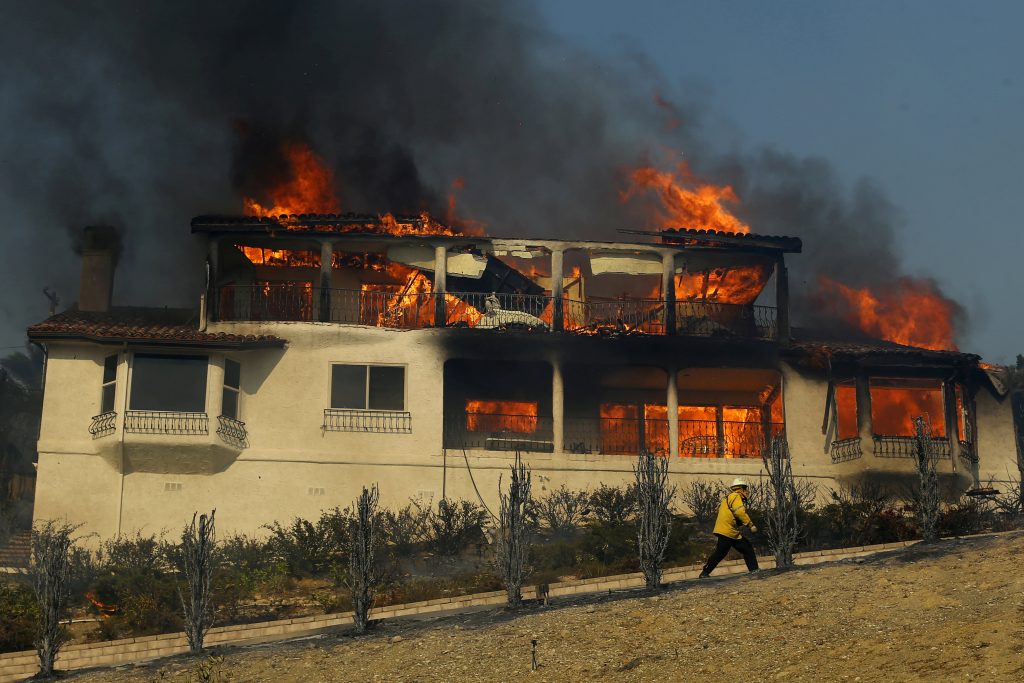 A fast-moving wildfire whipped by hot, dry Santa Ana winds destroyed hundreds of homes and other buildings in and around Ventura, California, on Tuesday as thousands of residents were forced to flee ahead of the flames.

The blaze, dubbed the Thomas Fire, broke out on Monday evening in the foothills above Ventura. Winds quickly drove it west into the city some 50 miles northwest of Los Angeles. By Tuesday afternoon it was zero percent contained, and had charred more than 45,000 acres and forced thousands to flee their homes.

California Governor Jerry Brown declared a state of emergency, freeing state funds and resources to assist the more than 1,000 firefighters battling to save homes from the conflagration.

“This fire is very dangerous and spreading rapidly, but we’ll continue to attack it with all we’ve got,” Brown said in a written statement. “It’s critical residents stay ready and evacuate immediately if told to do so.”

There were no immediate reports of fatalities from the blaze but local KABC-TV reported that one person was killed in a car crash while fleeing the area.

The Los Angeles Times reported that a car hit a firefighter who was protecting homes from the flames. It said he was being treated at a local hospital.

“Due to the intensity of the fire, crews are having trouble making access and there are multiple reports of structures on fire,” officials said on Ventura County’s emergency management website.

More than 250,000 homes were without power, local utilities said. All schools in the Ventura Unified School District were closed.

The Thomas Fire was the largest of several large blazes that broke out across Southern California following the onset of the Santa Ana winds.

In the San Fernando Valley north of Los Angeles, the so-called Creek Fire had blackened more than 4,000 acres and forced the evacuation of 2,500 homes and a convalescent center north of Interstate 210. The highway remained open even as other roads were closed, officials said.

“We’re chasing the fire, trying to get ahead of it, trying to get in front to provide structure defense,” Los Angeles County Chief Deputy David Richardson told reporters at an afternoon briefing as thick black smoke drifted across the city.

The Santa Ana winds, which blow in from the California desert, were forecast to top out at 70 miles per hour and remain strong through the week.