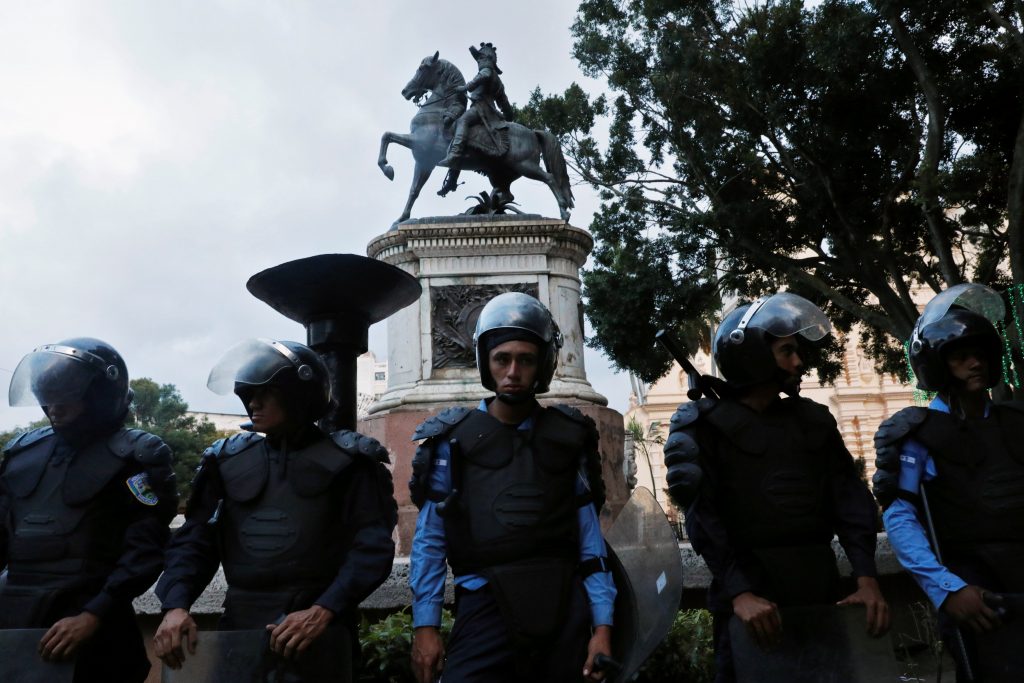 The main opposition candidate called Saturday for Honduras’ disputed presidential election to be held again after the country erupted in deadly protests over the delayed vote count and the government imposed a dawn-to-dusk curfew.

Both incumbent President Juan Orlando Hernandez and his rival, media personality Salvador Nasralla, have claimed victory in last Sunday’s vote, which the opposition says was filled with irregularities. Clashes between protesters and troops have left at least one person — and perhaps as many as a half-dozen — dead.

“I have asked them to repeat the elections, but only those for the presidency, with the aim of resolving the crisis that Honduras is suffering,” Nasralla told The Associated Press.

But he said the new election “would be under the supervision of an international electoral tribunal, not the local one, because there aren’t sufficient conditions to guarantee” the vote would be fair. Asked what response he got from the government to the proposal, Nasralla said “they haven’t responded and I don’t think they will.”

Honduras’ national police force said a 19-year-old woman was shot to death overnight at a pro-Nasralla protest by gunmen who witnesses say were police.

Police said another man was seriously wounded in the same shooting, but his whereabouts are unclear, and he is also believed to have died.

“We still do not know if the assailants were police officers or not, but the case is being thoroughly investigated,” according to a police statement.

The Coalition Against Impunity, a network of human rights organizations, said security forces had used lethal ammunition and that four other protesters are believed to have been killed during clashes across the country. The report was not immediately confirmed by police; demonstrators often carry off their fallen colleagues.

The protests were reminiscent of the 2009 coup that ousted former President Manuel Zelaya, whose Libre party is part of the coalition led by Nasralla that formed in a bid to unseat Hernandez.

The country’s electoral court had finished counting nearly 95 percent of the vote boxes from the Nov. 26 presidential election by late Friday and said it would conduct a hand count of 1,031 other boxes that presented “inconsistencies.”

Hernandez held a lead of more than 46,000 votes over Nasralla before the last-stage count. It was not immediately clear how many votes could be at play in the uncounted boxes. The count has been essentially frozen because Nasralla’s representatives say far more ballot boxes should be examined.

Mistrust mounted amid strange delays in the vote count and the sudden reversal of Nasralla’s early lead. Both Nasralla and Hernandez have declared themselves the winner.

Rock-wielding protesters have increasingly taken to the streets against riot police armed with tear gas, batons and water cannons. National police spokesman Jair Meza said numerous businesses were damaged and looted in the capital and in San Pedro Sula. By Saturday, Meza said more than 300 people had been detained for looting as they streamed out of shopping centers with electronics and other goods.

Groups of demonstrators also continued blocking highways with burning tires and other debris.

Zelaya and other opposition leaders have called for a mass march against the purported election fraud on Sunday.

In a decree read out on radio and television, the government’s Cabinet chief Jorge Hernandez said late Friday that some constitutional guarantees would be suspended for 10 days to allow the army and police to control the situation. The government declared a curfew from 6 p.m. to 6 a.m. across the country.

The military reported that 115 men and 23 women were detained in San Pedro Sula for violating the curfew on the first night it was implemented. They were later released.

On Saturday, electoral court president David Matamoros said he was willing to meet with representatives of the political parties about differences over vote counts. No announcements will be made until there is a final result.

After speaking with representatives of the opposition alliance and the ruling National Party, Matamoros said Friday that each party would be able to accredit 60 people to participate in the afternoon count alongside international observers. He estimated it could take six hours.

But the opposition published a list of demands that included a broader review of votes in three jurisdictions where it alleges voter turnout was unusually high and said the number of ballot boxes that presented issues was far larger. It was unclear if its demands would be met.

The count had still not begun Friday night because no representatives for Nasralla had arrived: “The wait continues,” said court spokeswoman Lourdes Rosales. There was no comment from the court Saturday morning.

In a statement, the court also said any suggestion of wrongdoing in its operations is false.

Heide Fulton, charge d’affaires at the U.S. Embassy in Honduras, called on Hondurans via Twitter Saturday to remain peaceful.