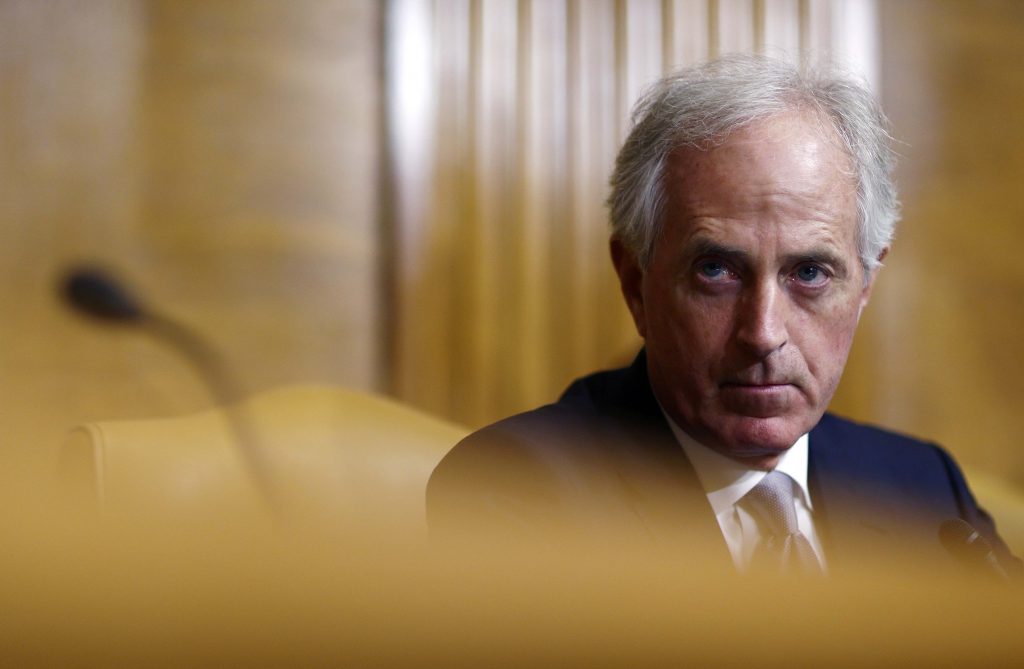 A key concession that helped clear Republican tax legislation for a Senate vote as early as Thursday is drawing sharp opposition from conservative groups and some lawmakers, signaling that GOP leaders still face challenges in achieving a major legislative victory before year’s end.

The Senate Budget Committee approved the bill on a party-line vote of 12-11 Tuesday, but only after Sen. Bob Corker of Tennessee said he bargained for adding a controversial provision: a so-called revenue trigger that would impose tax increases if the tax bill’s cuts raise the federal deficit.

That victory for Corker — who said he has “an agreement in principle” to add the trigger — sparked condemnation from other Republicans, despite a lack of detail about how the provision would work. It has already been criticized by GOP-friendly interest groups, including the U.S. Chamber of Commerce.

“It’s the first thing that’s come up that gives me pause about this bill,” said Republican Sen. John Kennedy of Louisiana. Even before the committee vote, Sen. Pat Toomey of Pennsylvania said a revenue trigger would hobble the bill’s ability to spur economic growth.

Senate Republican leaders need to corral at least 50 votes from their 52 members to pass the measure without any Democrats. Adding the revenue trigger might help secure three GOP votes — from Corker, Oklahoma’s James Lankford and Arizona’s Jeff Flake — but it’s not yet clear how many it would put at risk.

Kennedy initially indicated on Tuesday that a trigger provision would never get his vote — he said he’d rather drink weed killer. But he later walked that back, saying he had told Lankford he would keep “an open mind.”

Republican Sen. John Boozman of Arkansas said he’s waiting to see the written provision, but “there might be ways they want to accomplish this that I would oppose.”

Senate Finance Chairman Orrin Hatch, who’ll have to sign off on a final version of the trigger, said he’s worried. “Every little thing is a worry,” the Utah Republican said. “We can’t afford to lose more than two. We are very concerned about it.”

The bill that is headed for the Senate floor would cut the corporate tax rate to 20 percent from 35 percent, beginning in 2019. It would also cut individual tax rates and double the standard deduction before wiping those individual changes off the books in 2026. The bill is estimated to increase federal deficits by $1.4 trillion over 10 years — though its backers say it would ultimately prompt enough economic growth to cover those gaps.

Independent analyses have found that the bill wouldn’t produce that growth – and Congress’s official tax scorekeeper, the Joint Committee on Taxation, has yet to weigh in with a macroeconomic analysis. This week, that committee said in a letter that it may complete such a study on Wednesday.

But Corker, Lankford and Flake have said they want assurances that the cuts wouldn’t boost the national debt.

Details of how the revenue trigger would work were scant Tuesday — and Corker said they may not emerge until Thursday. North Carolina Representative Mark Meadows, the chairman of the conservative House Freedom Caucus, said he’s received an early description of the mechanism from Lankford:

If the economy failed to achieve enough growth to cover the bill’s tax cuts, the corporate tax rate would increase by 1 percentage point in the fifth year of the plan, Meadows said. He added that he’d be willing to entertain the idea.

It’s not clear whether that description was still valid by Tuesday evening — Senate Republican leaders were tight-lipped. Corker said he had gotten buy-in — in principle — from Senate Majority Leader Mitch McConnell, from the tax-writing Finance Committee, “and the White House has been in the midst of all this too.”

“It will be part of the base bill,” Corker said.

White House officials were staying out of the trigger debate Tuesday evening. One senior official described the issue as a “member to member conversation” for senators, and said it won’t be one of President Donald Trump’s red-line issues.

John Thune, the third-ranking Senate Republican from South Dakota, wouldn’t commit to including the trigger provision during an afternoon interview with Bloomberg TV.

“If the agreement is made with some of our members who need this in order for us to move forward to get the 50 votes, we may have to end up agreeing to something along those lines,” he said. He added: “In the long-run, it’s not in our best interest to have a mechanism that would create a tax increase.”

Some conservatives argue that building a potential tax increase into their tax plan would create uncertainty about long-term tax rates and inhibit investment and job growth. While the corporate rate cut is intended to be permanent, individual provisions in the bill are already set to expire in 2026 in order to meet deficit targets.

“The key to pro-growth tax reform is permanence and certainty,” said anti-tax crusader Grover Norquist. “No one invests in response to ‘maybe.’ A trigger that threatens tax hikes is a self-fulfilling threat to kill jobs.”

J.D. Foster, the chief economist for the U.S. Chamber of Commerce, cited a particular problem: A trigger might force a tax increase in the midst of an economic recession.

“Even with the passage of tax reform and other pro-growth policies like regulatory relief and, hopefully, eventually an infrastructure bill, the fact remains a recession sometime in the course of the next 10 years is a very good bet,” Foster wrote. His article on a Chamber website called the trigger idea “impractical, unreasonable and unnecessary.”

Other groups were just as critical.

Both groups are scheduled to hold a news conference with select senators on Wednesday morning to call for the tax bill’s passage. Corker, Lankford and Flake don’t appear on the guest list.