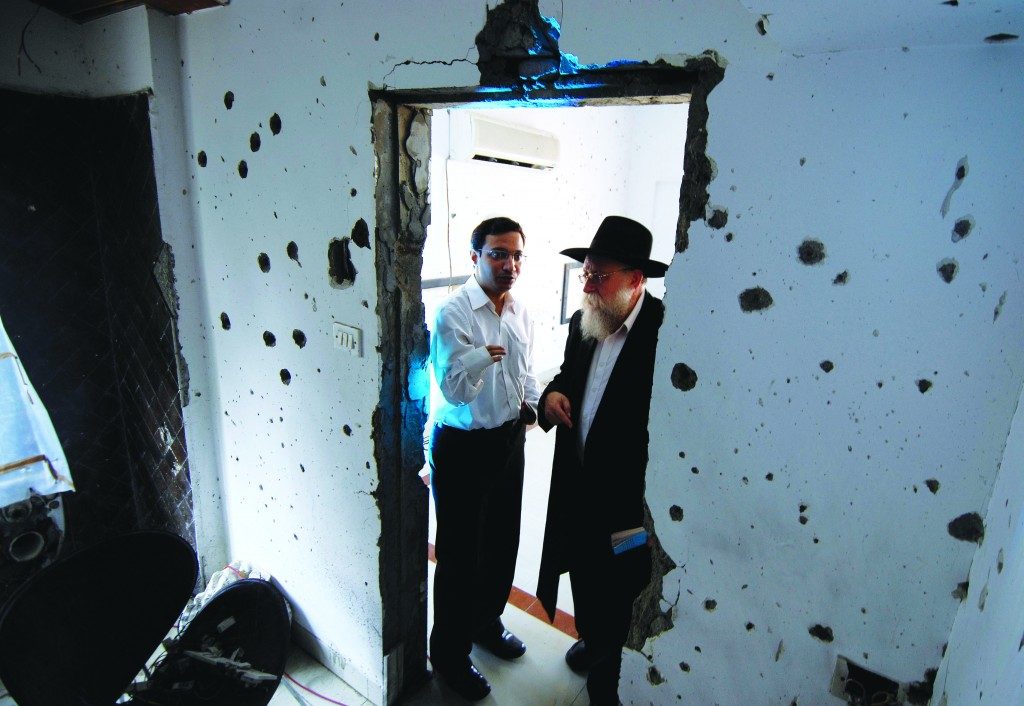 Nine years have passed since ten members of an infamous Pakistani terror group unleashed a series of coordinated terror attacks in the Indian city of Mumbai.

For three terrifying days, as the world watched in horror, the terrorists held the city hostage. Using guns and bombs, they attacked luxury hotels, restaurants and a crowded train station. When it was finally over, 168 people were killed and some 300 injured.

Instructed by their handlers in Pakistan that the death of one Jew was worth that of 50 non-Jews, several attackers targeted the Chabad House, murdering Rabbi Gavriel Noach Holtzberg; his wife, Rebbetzin Rivka Holtzberg, and their unborn child; Rabbi Leibish Teitelbaum; Rabbi Bentzion Kruman; Mrs. Norma Shvarzblat; and Mrs. Yocheved Orpaz, Hashem yinkom damam.

For the families, friends, and admirers of the victims, the pain caused by their terrible loss will never go away.

On Friday, more salt was poured on this still open wound, when authorities released the man believed to be the mastermind of this most heinous attack.

Pakistan had been alternating between detaining and freeing Hafiz Saeed ever since the attack. He has spent the past ten months under house arrest in Lahore and was released after a court rejected a government request to continue his detention.

Hours after his release, Saeed was showered by rose petals and addressed thousands of followers at a sprawling mosque in Lahore.

Saeed, who ran the Jamaat-ud-Dawa organization, widely believed to be a front for the Lashkar-e-Taiba terror group, has been appropriately designated as a terrorist by the U.S. Justice Department and has a $10 million bounty on his head.

While nine of the terrorists were killed by authorities during the attacks, a tenth, Mohammed Ajmal Kasab, was caught alive and later hanged for his crimes. While in custody, Kasab revealed that Lashkar-e-Taiba was behind the attack.

The Trump administration was rightfully outraged by the news, and in a strongly worded statement, the White House press secretary condemned the release.

After pointing out that “a clear international consensus exists regarding Saeed’s culpability — he was designated by the United Nations under U.N. Security Council Resolution 1267 in December 2008,” the White House minced no words about Pakistan’s responsibilities.

“Saeed’s release, after Pakistan’s failure to prosecute or charge him, sends a deeply troubling message about Pakistan’s commitment to combating international terrorism and belies Pakistani claims that it will not provide sanctuary for terrorists on its soil. If Pakistan does not take action to lawfully detain Saeed and charge him for his crimes, its inaction will have repercussions for bilateral relations and for Pakistan’s global reputation,” the statement read.
“As President Donald J. Trump’s South Asia policy makes clear, the United States seeks a constructive relationship with Pakistan, but expects decisive action against militant and terrorist groups on Pakistani soil that are a threat to the region. The release of Saeed is a step in the wrong direction,” it continues. “The Pakistani government now has an opportunity to demonstrate its seriousness in confronting all forms of terrorism, without distinction, by arresting and charging Hafiz Saeed for his crimes.”

The relationship between the United States and Pakistan is so complex that it is in many ways downright baffling. Generally considered to be a U.S. ally — and a recipient of astronomical amounts of American aid over the years — it also hosted Osama bin Ladin until he was discovered and killed by U.S. Special Forces.

The release of Saeed is only the latest in a long list of highly disturbing actions by the Pakistani government. While it remains eager to collect U.S. aid, it remains unwilling to take even the most minimal steps towards fighting terror.

In contrast to its predecessor, the Trump administration, much to its credit, has sent a strong message that the United States is no longer willing to tolerate such conduct by a country that claims to be an ally but whose behavior belies such an association.

It is the obligation of all of civilized society to ensure that fiends like Saeed and his cohorts are brought to justice. It is high time for a concerted, coordinated effort by free governments throughout the world to pressure Pakistan into re-arresting this arch-terrorist, and hopefully extraditing him to a land where he will finally face charges for the attack he masterminded.

Whether Hafiz Saeed will reap the fate that he so richly deserves in this world or the next remains to be seen, but eventually he will pay the ultimate price for his reprehensible deeds.

At the same time, perhaps the most powerful response to the Mumbai massacre stems not from Washington nor Karachi but from the homes and hearts of the relatives of the victims. The very fact that they were able to find the strength to forge ahead with their own lives and keep the memory of the victims alive, despite the terrible losses they suffered, is in itself a most powerful act of retaliation.