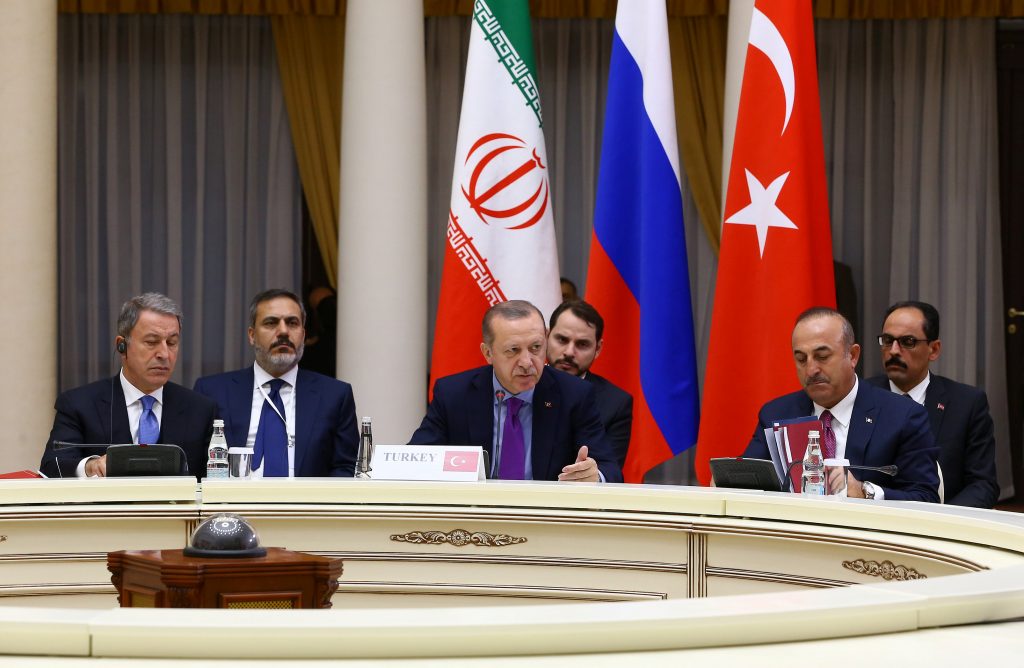 A three-way summit on Wednesday between the leaders of Russia, Iran and Turkey could produce decisive steps towards ending the bloodshed in Syria, Turkish President Tayyip Erdogan said at the start of their talks.

The summit, hosted by Russian President Vladimir Putin, is a rare occasion bringing together the leaders of Russia and Iran – who back Syria’s President Bashar al-Assad – around a table with Erdogan, who has supported Assad’s opponents.

In opening remarks at the summit in the southern Russian resort of Sochi, Putin, Erdogan and Iran’s President Hassan Rouhani spoke of an opening for peace in Syria now that Islamic State has been pushed out of its last major stronghold there.

“The point we have reached is important, but not enough,” Erdogan told the gathering, also attended by military commanders and foreign ministers from the three countries.

“It is critical for all parties to contribute to a permanent and acceptable political solution for the people of Syria,” he said. “This summit is aimed at results, I believe critical decisions will be taken.”

As a prelude to the summit, Putin earlier this week hosted Assad at his residence in Sochi. It was the only time the Syrian leader is known to have left Syria since his last visit to Russia, two years ago.

Putin also made telephone calls in the past 24 hours to other leaders with influence in Syria, including U.S. President Donald Trump and Saudi Arabia’s King Salman, as part of Moscow’s drive to build an international consensus over a peace deal to end the six-year conflict.

“We can say with certainty that we have reached a new stage, opening up the possibility to launch a real political process towards a peace deal,” Putin told the gathering.

“Compromises and concessions will be needed on all sides … including (from) the Syrian government,” Putin said.

He said the focus of peace efforts should be the convocation of a congress bringing together all of Syria’s ethnic groups.

Russia has offered to host such a congress in Sochi, but attempts to agree a date have so far foundered, in part because Turkey raised objections to the presence of some Kurdish groups.

Iran’s Rouhani used his remarks at the summit to rail against the presence of foreign forces in Syria, an apparent reference to the United States and Tehran’s arch regional rival Saudi Arabia, which alongside Turkey have backed Assad’s foes.

“There is no excuse for the presence of foreign troops in Syria without the approval of its legitimate government,” Rouhani said.

“The Syrian nation will not allow any interference of foreigners in their state affairs and will confront any move that harms Syria’s integrity, independence and unity,” he said.

Iran’s military is also present in Syria, alongside Russian troops and Hezbollah, the pro-Iran Lebanese militia. They say that does not amount to foreign interference because they are in Syria at Assad’s invitation.