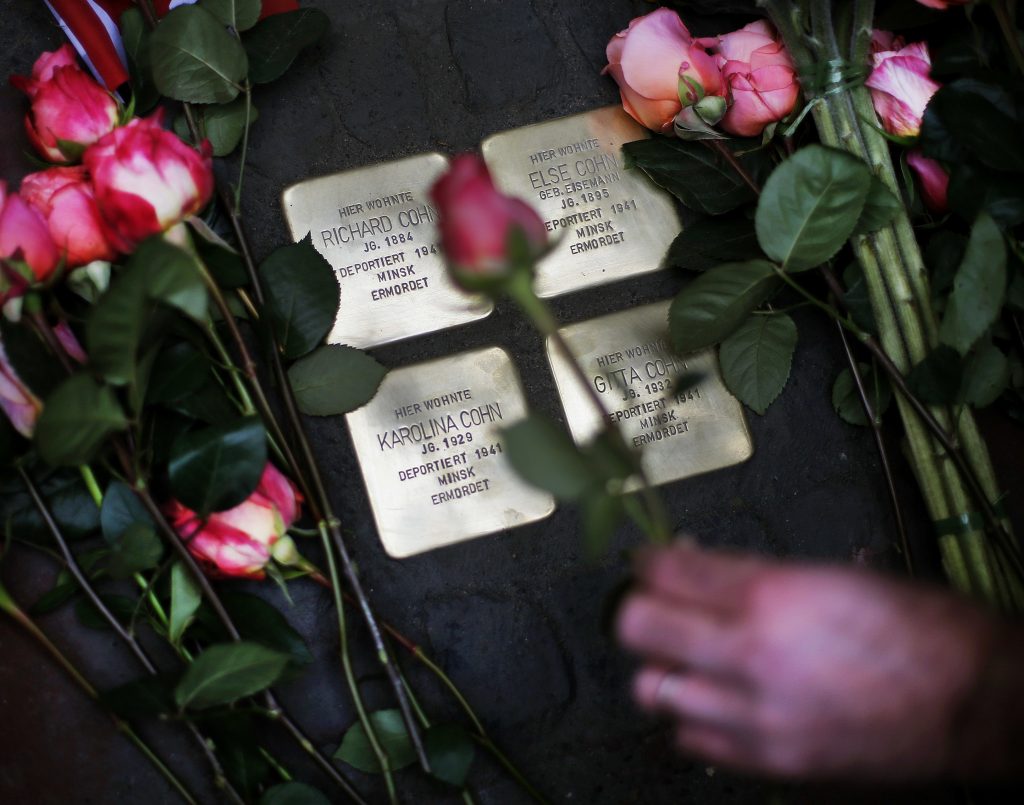 More than two dozen relatives from around the world met for the first time on Monday at a memorial ceremony for Karolina Cohn, a Jewish girl from Frankfurt who perished in the Holocaust more than 70 years ago.

Four little brass plaques for Karolina, her sister and parents were laid in front of the Frankfurt location where the family lived before they were deported on Nov. 11, 1941, when Karolina was 12.

“It’s pretty remarkable that this little girl brought together this broken-up, fragmented family,” said Mandy Eisemann, a relative from the United States, who took part in the ceremony, and afterward laid pink roses on the shiny plaques known as “Stolpersteine,” or stumbling stones.

The story of Karolina’s life and death had been all but erased by the Nazis, until archeologists last year unearthed a silver pendant engraved with her birthdate and birthplace at the grounds of the former Sobibor death camp in eastern Poland.

With the help of Nazi deportation lists, researchers identified Karolina as the owner of the amulet. It’s almost identical to one belonging to famous Jewish diarist Anne Frank, though it’s not clear if the two girls knew each other. Both were born in Frankfurt in 1929.

The triangle-shaped pendant was found by an Israeli-Polish archeologists’ team under the ruins of a hut where the women’s hair was shaved before they were led to the gas chambers.

It’s not clear if Karolina was ever taken to Sobibor or if she gave the amulet to somebody else who brought it there. All traces of Karolina disappeared after she and her family were deported to the Minsk Ghetto in late 1941.

After the pendant was linked to the German girl last year, a genealogist started tracking down family members and found about 40 relatives in Israel, the U.S., Italy and Japan. Many of them had never heard about Karolina and her family, but more than two dozen accepted an invitation from the Jewish Claims Conference to meet in Germany for the ceremony and a reunion.

“It’s a heart-warming emotion to meet family who were strangers to us before today,” said Barry Eisemann, the father of Mandy and a first cousin of Karolina. “But it’s a heart-wrenching emotion … to know that Karolina and the entire family perished in the Holocaust.”

Holding a replica of the pendant, Greg Schneider, the vice president of the Jewish Claims Conference reminded the more than 100 participants of the ceremony than Karolina was one of 1.5 million children who were murdered in the Holocaust.

“It’s almost too painful to think about what was done to this girl,” he told The Associated Press in a phone interview Sunday. “But we don’t have the moral right to forget Karolina.”