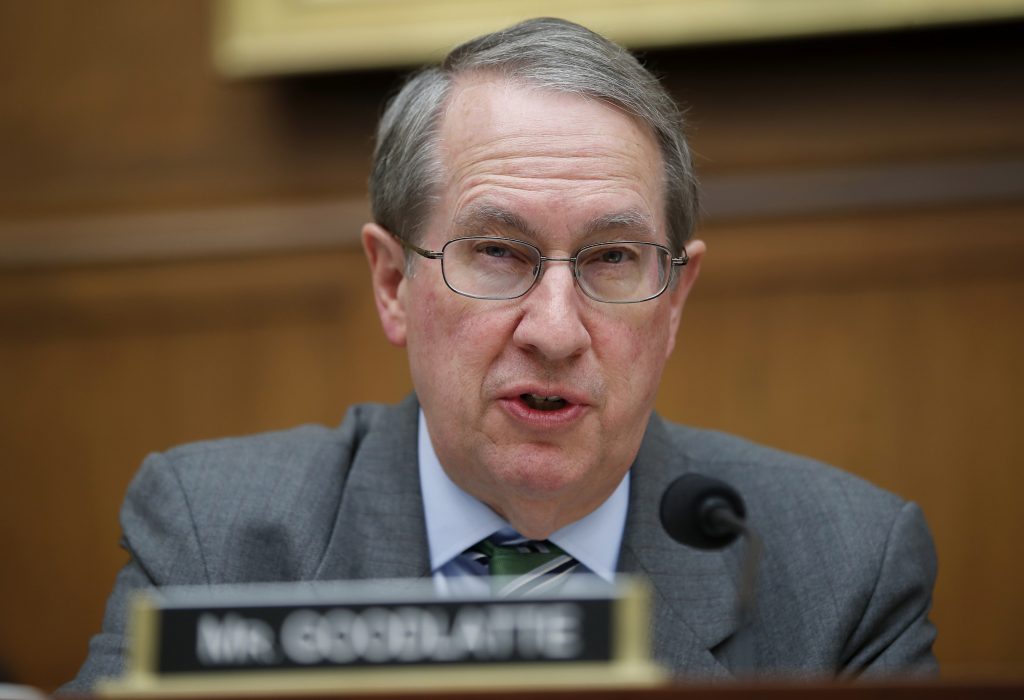 Rep. Bob Goodlatte, who leads the House Judiciary Committee, announced Thursday he will retire at the end of his 13th term, becoming the latest GOP chairman not to seek re-election even though Republicans control all levers of power in Washington.

Goodlatte’s tenure as chairman ends in December 2018 due to term limits. In a statement, the Virginia lawmaker described that as the “natural stepping-off point” and a chance to begin a new chapter. He said that every two years, he and his wife, Maryellen, sit down to discuss whether he should run again.

“When we discussed the 2018 election, the conversation ended a little differently than in past years,” Goodlatte said. “After much contemplation and prayer, we decided it was the right time for me to step aside and let someone else serve” in the western Virginia district that includes Roanoke and is strongly Republican.

Over the past two weeks, two other House chairmen, both Texans, have decided to leave after their current terms end in January 2019: Rep. Lamar Smith of the House Science, Space and Technology Committee and Rep. Jeb Hensarling of the House Financial Services Committee. In the Senate, Republican Bob Corker of Tennessee, chairman of the Senate Foreign Relations Committee, said he won’t be on the ballot in 2018.

The 65-year-old Goodlatte, first elected in 1992, took over as chairman of the influential committee in 2013 after Smith had to vacate that post due to term limits. Earlier, Goodlatte headed the House Agriculture Committee.

He’s been staunchly conservative on most fiscal and social issues, but did find common ground with Democrats on technology and national security. Most recently, Goodlatte joined with committee Democrats to sponsor a bill that would require law enforcement agencies to get a court order before viewing intelligence collected by the National Security Agency.

A fiscal hawk, Goodlatte backed a 2012 amendment that would have cut defense spending by more than $7 billion.

He sparred frequently with the Obama administration and Democrats on immigration. Four years ago, after the Senate passed a comprehensive bill to overhaul U.S. immigration laws, Goodlatte rejected the idea of giving millions of immigrants living in the U.S. illegally a special path to citizenship.

Goodlatte said the House should chart its own course on immigration even if that failed to produce a plan acceptable to President Barack Obama. He said he would do everything possible to ensure the House never acted on the Senate’s bill. That legislation never did have a House vote.

The House in September passed legislation he sponsored to make membership in a criminal gang grounds for deportation. Republicans have warned of the dangers of the violent street gang MS-13.

Goodlatte said it’s estimated that more than 10,000 MS-13 members are living in the United States. Whether they arrived illegally or have valid visas or green cards, he said it is time to send the message that the gang activity will not be tolerated.

The MS-13 gang emerged as a campaign issue during this year’s Virginia governor’s race.

President Donald Trump accused the Democratic nominee, Ralph Northam, of “fighting” on behalf of MS-13, and he urged Virginians to vote for Republican Ed Gillespie. Northam defeated Gillespie on Tuesday.