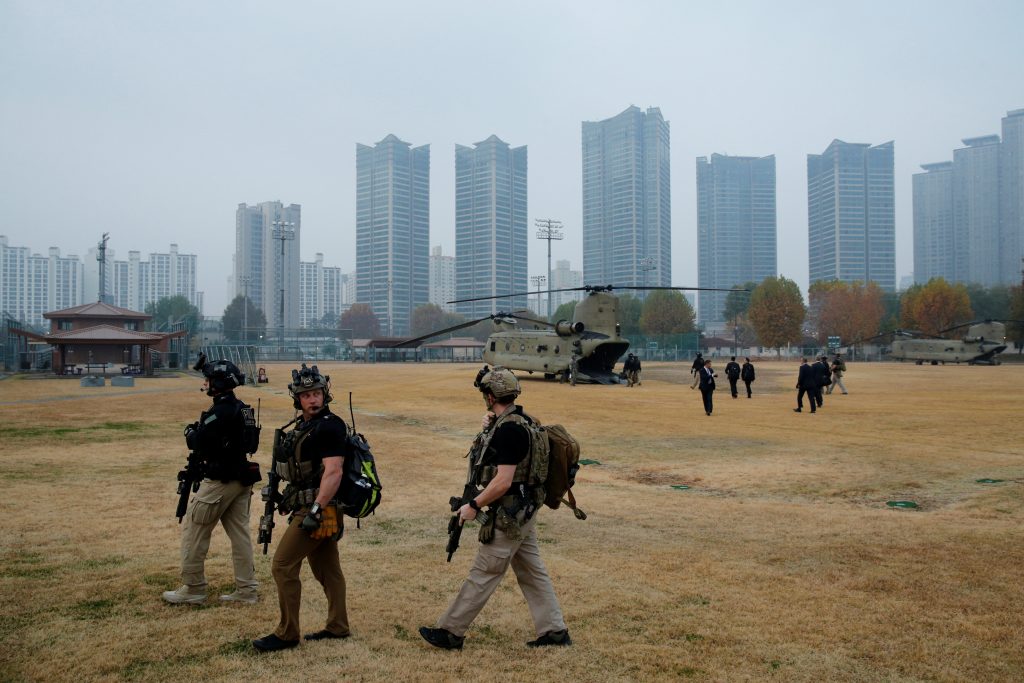 After months of fiery rhetoric and rising tensions, President Donald Trump’s secret attempt to personally face off with North Korea across the heavily fortified demilitarized zone (DMZ) on Wednesday was defeated by fog and mist.

Helicopters carrying Trump and an entourage of staff, media and security forces were turned back just minutes from the DMZ, thwarting a plan that had been in the works since before the president left on his trip through Asia.

Often clad in photo-friendly bomber jackets, all U.S. presidents since Ronald Reagan have visited the DMZ except for George H.W. Bush, who toured as vice president.

In April, U.S. Vice President Mike Pence visited the DMZ, also sporting a bomber jacket, so that the North Koreans could see “our resolve in my face.”

Trump’s attempt for his own visit had been in the works for some time, despite previous denials from the White House, including late last month by a senior official who called visiting the DMZ “a little bit of a cliché.”

“This is where we’re going,” Sanders said, holding up a piece of notepaper on which the letters “DMZ” were scrawled.

Helicopters carrying Trump and his entourage took off from a sports field on the base, with camouflage-clad men seated at the back of the aircraft.

Weaving through the dense fog that shrouded Seoul’s skyscrapers, the helicopters were only minutes away from landing at the DMZ when they turned back to the base.

“There wasn’t enough visibility to land,” Sanders said. “It would have been really dangerous, and our guys pulled back.”

The trip was finalized during bilateral meetings between Trump and South Korea President Moon Jae-in on Tuesday, officials said.

When Trump told Moon he was interested in visiting the DMZ, the South Korean president not only gave his blessing, but said he would meet Trump there.

“It would be good for you to go. If you go, I will go with you,” said Moon, quoted by a presidential Blue House official.

Moon waited about 30 minutes for Trump at the DMZ on Wednesday, having driven part of the way to the fortified border by road, an option not open to Trump because of security concerns.

As he waited for a second chance back at Yongsan, Trump sat in his limousine, working on a draft of his speech to be given at South Korea’s National Assembly later that day — a speech which saw Trump return to his bellicose attack of North Korea and its leader Kim Jong Un.

“The world cannot tolerate the menace of a rogue regime that threatens it with nuclear devastation,” Trump later declared in his speech.

But as he sat in his car, there was to be no second chance to look across the DMZ to North Korea, as the fog, mixed with yellow dust blown in from China, lingered late into the morning.

On Wednesday, before news of the aborted trip broke, an editorial in China Daily, a state-run English-language newspaper, praised Trump’s previously announced decision not to visit and North Korea’s restraint in not carrying out further missile or nuclear tests.

“The restraint both Washington and Pyongyang have demonstrated so far … is a hopeful sign that both prefer to find a peaceful solution to their predicaments,” the editorial said.