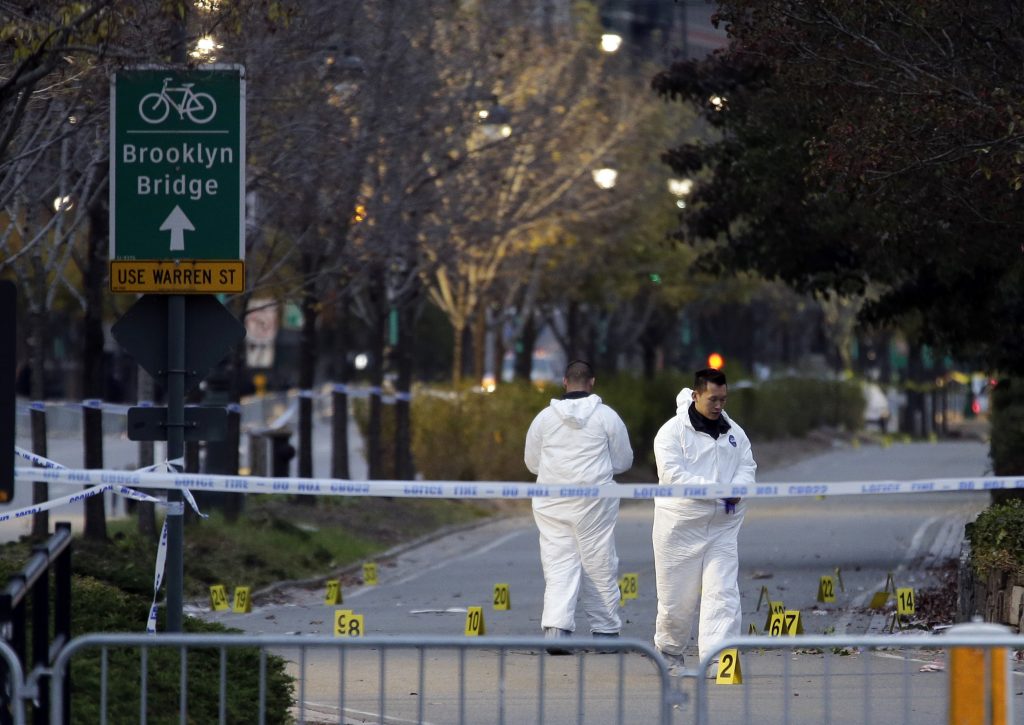 The Uzbek immigrant accused of mowing down people along a bike path near the World Trade Center left a handwritten note referring to the Islamic State terror group and had been radicalized in the U.S., New York’s governor said Wednesday.

The official, who was not authorized to discuss the investigation and spoke on condition of anonymity, said Saipov was lucid after surgery for wounds suffered when he was shot by police.

Gov. Andrew Cuomo said the suspect was a “depraved coward” who tried to create terror. He gave no details on the note except to say it referred to the Islamic State terror group.

“He was associated with ISIS and he was radicalized domestically,” he said on CNN. “It’s not the first time. It’s a global phenomenon now.”

In a number of recent terror attacks around the world, the assailants were found to have been inspired but not actually directed by the Islamic State, and in some cases never even made contact with the group.

In Tuesday’s attack, Saipov hurtled down the bike path, running down cyclists and pedestrians, then crashed into a school bus, authorities said. He was shot in the abdomen after he jumped out of the vehicle brandishing air guns and yelling “G-d is great!” in Arabic, they said.

Police and the FBI urged members of the public to come forward with any photos or videos that could help.

In the past few years, the Islamic State has been exhorting followers to use vehicles or other close-at-hand means of killing people in their home countries. England, France and Germany have seen deadly vehicle attacks in the past year or so.

On Wednesday, President Donald Trump said that Saipov came to the U.S. under a visa lottery program. He urged tougher immigration measures based on merit.

The victims reflected a city that is a melting pot and a magnet for visitors: One of the dead was from Belgium. Five were from Argentina and were celebrating the 30th anniversary of a school graduation. The injured included students and staffers on the school bus.

New Yorkers woke to a heavy police presence Wednesday outside the World Trade Center and at other locations around the city.

Law enforcement officials who were not authorized to discuss the investigation and spoke on condition of anonymity said the slight, bearded attacker is from heavily Muslim Uzbekistan and came to the U.S. legally in 2010. He has a Florida driver’s license but may have been staying in New Jersey, they said.

Records show Saipov was a commercial truck driver who formed a pair of businesses in Ohio. He had also driven for Uber.