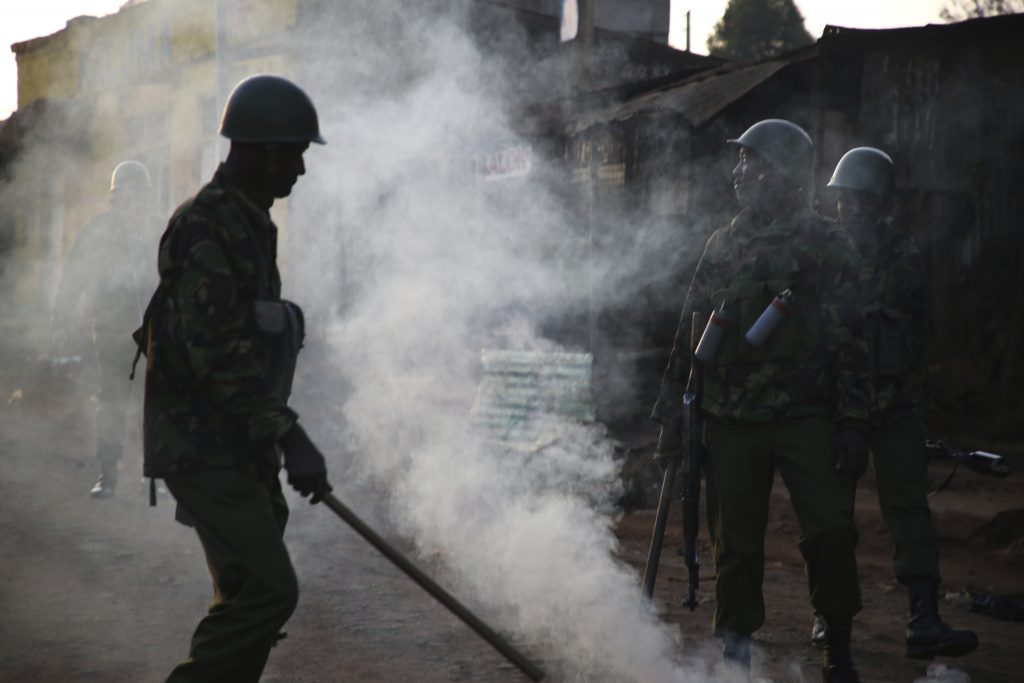 President Uhuru Kenyatta on Monday was declared the overwhelming winner of a rerun election boycotted by Kenya’s main opposition leader, collecting 98 percent of the vote but also exposing the divisions roiling this East African country.

While Kenyatta’s backers celebrated his re-election, angry supporters of his rival, Raila Odinga, skirmished with police in Nairobi slums and burned tires in Kisumu, one of the opposition strongholds in western Kenya.

Kenya’s election commission said the turnout of registered voters in the Oct. 26 election was about 40 percent, compared with roughly twice that in August balloting that was nullified by the Supreme Court because of what it called “irregularities and illegalities.”

The rerun was marred by deadly clashes between police and Odinga supporters in the days that followed.

Kenyatta said he expected Odinga followers to mount new legal challenges, indicating that the long saga that has left many Kenyans weary of conflict and has hurt business in East Africa’s economic hub is not over.

“My victory today was just part of a process that is likely to once again be subjected to a constitutional test through our courts,” Kenyatta said at the election commission headquarters after results were announced that gave him a second term. “I will submit to this constitutional path.”

Kenyatta said he would consider dialogue with the opposition after the outcome of any court proceedings. He also described his victory as a validation of his win in August, saying the 7.5 million votes that he received this time amounted to 90 percent of what he got earlier.

Odinga, who dismissed the repeat election as a sham and told his supporters not to participate, remained on the ballot and still got 73,000 votes, or just under 1 percent. In August, he received 45 percent to Kenyatta’s 54 percent.

At least nine people have died in violence since the rerun election. Some were shot by police; several died in fighting between Kenya’s different ethnic groups, highlighting the loyalties that drive Kenyan politics. Mobs have also looted shops and burned property in some areas.

Tires were set ablaze in the western town of Kisumu.

“It was not an election that involved everyone,” said Peter Musundi, a Kawangware resident. He called the vote a “nomination exercise” for the ruling Jubilee party.

Some Kenyatta backers celebrated his victory with song and dance.

Voting did not take place in two dozen of Kenya’s 290 constituencies due to opposition protests, although the election commission cited an election law that says final results can be announced if the outcome is not affected by the tally in areas that didn’t vote.

Wafula Chebukati, chairman of the election commission, said before the Oct. 26 vote that he could not guarantee its credibility. Before announcing the results, however, he said he was confident it was a “free, fair and credible election.”

Odinga has said he will form a “resistance” movement to oppose the government, which has in turn accused opposition leaders of fomenting violence with incendiary rhetoric. He also said he wants another election to be held.

Odinga, who is from the Luo ethnic group, and Kenyatta, who is a Kikuyu, also faced off in a 2013 election similarly marred by allegations of vote-rigging. The opposition leader also ran unsuccessfully in 2007, and ethnic-fueled animosity after that vote killed more than 1,000 people and forced 600,000 from their homes.

Most of Kenya has been peaceful during the political standoff that has transfixed the nation since the August election; human rights groups say dozens of people were killed by police in unrest following the earlier vote.

U.S. Ambassador Robert F. Godec said Washington is deeply concerned by the recent violence and urged Kenyans to engage in dialogue “to resolve the deep divisions that the electoral process has exacerbated.”

Amnesty International alleged that police used “unlawful force” against opposition supporters and bystanders after the rerun election. The human rights group cited cases of “police brutality” as well as violence and intimidation by backers of both candidates.

In his victory speech, Kenyatta appealed for unity. Standing at a podium, he drew laughter with a reference to his speech after his August election win.

“I’ve been here before,” he said. “Hopefully, this is for the last time.”