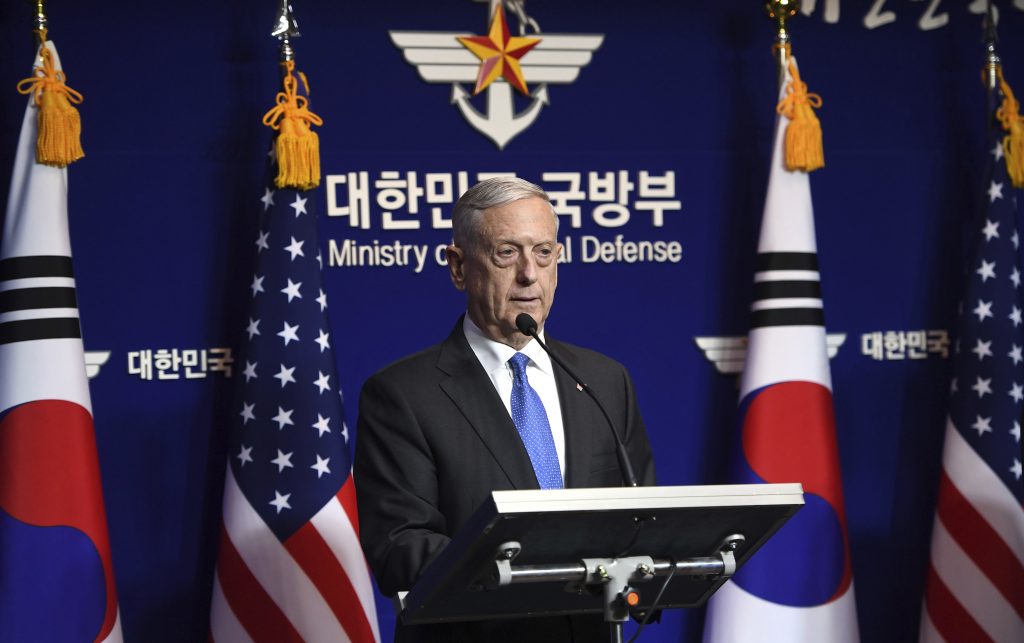 In remarks in Seoul with South Korean Defense Minister Song Young-moo at his side, Mattis accused the North of illegal and unnecessary missile and nuclear programs — and vowed to defeat any attack.

Mattis said North Korea is engaging in “outlaw” behavior and that the U.S. will never accept a nuclear North.

He added that regardless of what the North might try, it is overmatched by the firepower and cohesiveness of the decades-old U.S.-South Korean alliance.

“North Korea has accelerated the threat that it poses to its neighbors and the world through its illegal and unnecessary missile and nuclear weapons programs,” he said, adding that U.S.-South Korean military and diplomatic collaboration thus has taken on “a new urgency.”

“I cannot imagine a condition under which the United States would accept North Korea as a nuclear power,” he said.

As he emphasized throughout his week-long Asia trip, which included stops in Thailand and the Philippines, Mattis said diplomacy remains the preferred way to deal with the North.

“With that said,” he added, “make no mistake — any attack on the United States or our allies will be defeated, and any use of nuclear weapons by the North will be met with a massive military response that is effective and overwhelming.”

Mattis’s comments did not go beyond his recent statements of concern about North Korea, although he appeared to inject a stronger note about the urgency of resolving the crisis.

While he accused the North of “outlaw” behavior, he did not mention that President Donald Trump has ratcheted up his own rhetoric. In August, Trump warned the North not to make any more threats against the United States, and said that if it did, it would be met with “fire and fury like the world has never seen.”

Song, the South Korean minister, told the news conference that he and Mattis agreed to further cooperation on strengthening Seoul’s defense capabilities, including lifting warhead payload limits on South Korean conventional missiles and supporting the country’s acquisition of “most advanced military assets.” He offered no specifics and refused to answer when asked whether the discussions included nuclear-powered submarines.

Some South Korean government officials have endorsed the nation getting nuclear-powered submarines amid calls for more military strength. There’s a growing concern among the South Korean public that North Korea’s expanding nuclear weapons arsenal, which may soon include an intercontinental ballistic missile that could target the U.S. mainland, would undermine Seoul’s decades-long alliance with Washington.

South Korea’s conservative politicians have also called for the United States to bring back tactical nuclear weapons that were withdrawn from the Korean Peninsula in the 1990s, which they say would make clearer the U.S. intent to use nukes in a crisis. But Mattis and Song were strongly dismissive of the idea.

“When considering national interest, it’s much better not to deploy them,” said Song, adding that the allies would have “sufficient means” to respond to a North Korean nuclear attack even without placing tactical nukes in the South. Mattis said current U.S. strategic assets are already providing nuclear deterrence and that the South Korean government has never approached him with the subject of tactical nukes.

Also discussed in the meeting were the conditions under which South Korea would be given wartime operational control of its forces. Currently, if war with the North broke out, the South’s forces would operate under the U.S.-led U.N. Command.

Trump entered office declaring his commitment to solving the North Korea problem, asserting that he would succeed where his predecessors had failed. His administration has sought to increase pressure on Pyongyang through U.N. Security Council sanctions and other diplomatic efforts, but the North hasn’t budged from its goal of building a full-fledged nuclear arsenal, including missiles capable of striking the U.S. mainland.

If Trump sticks to his pledge to stop the North from being able to threaten the U.S. with a nuclear attack, something will have to give — either a negotiated tempering of the North’s ambitions or a U.S. acceptance of the North as a nuclear power.

The other alternative would be U.S. military action to attempt to neutralize or eliminate the North’s nuclear assets – a move fraught with risk for South Korea, Japan and the United States.

At his Seoul news conference, Mattis said the North is, in effect, shooting itself in the foot.

“If it remains on its current path of ballistic missiles and atomic bombs, it will be counterproductive, in effect reducing its security,” he said.

Mattis touched off unease in South Korea last month when he told reporters at the Pentagon that the United States has military options for North Korea that doesn’t put Seoul at risk. At Saturday’s briefing, Mattis didn’t offer a direct answer to what those options are or how and when they would be used.

“Our military options as I mentioned are designed to buttress the diplomats’ efforts to maintain a deterrence stance and denuclearize the Korean Peninsula,” he said. While the allies are committed to deterring North Korea, they also need “many different military options that would realistically reduce that threat as low as possible,” Mattis said.

“And yes, we do have those options,” he said.

The North says it needs nuclear weapons to counter what it believes is a U.S. effort to strangle its economy and overthrow the Kim government.

This was Mattis’s second visit to South Korea since taking office in January. He made a point of going to Seoul and Tokyo on his first overseas trip in February, saying he wanted to emphasize the importance he places on strengthening alliances and partnerships.

On Friday he visited the Demilitarized Zone that forms an official buffer zone between the two Koreas. He appeared there with Song in what they both called a show of solidarity.

U.S. government officials for decades have confidently but mistakenly predicted the approaching collapse of North Korea, given its economic and political isolation.

Twenty years ago, Mattis’s predecessor five times removed, William Cohen, said as he peered into North Korea from inside the DMZ that its communist system was “decaying and dying.” His view was widely shared in Washington, but, like others, he underestimated the resilience of Pyongyang’s family dynasty, which began with Kim Il Sung. The current ruler assumed control of the country shortly after his father, Kim Jong-Il, died in December 2011, and has accelerated the country’s nuclear and missile programs.