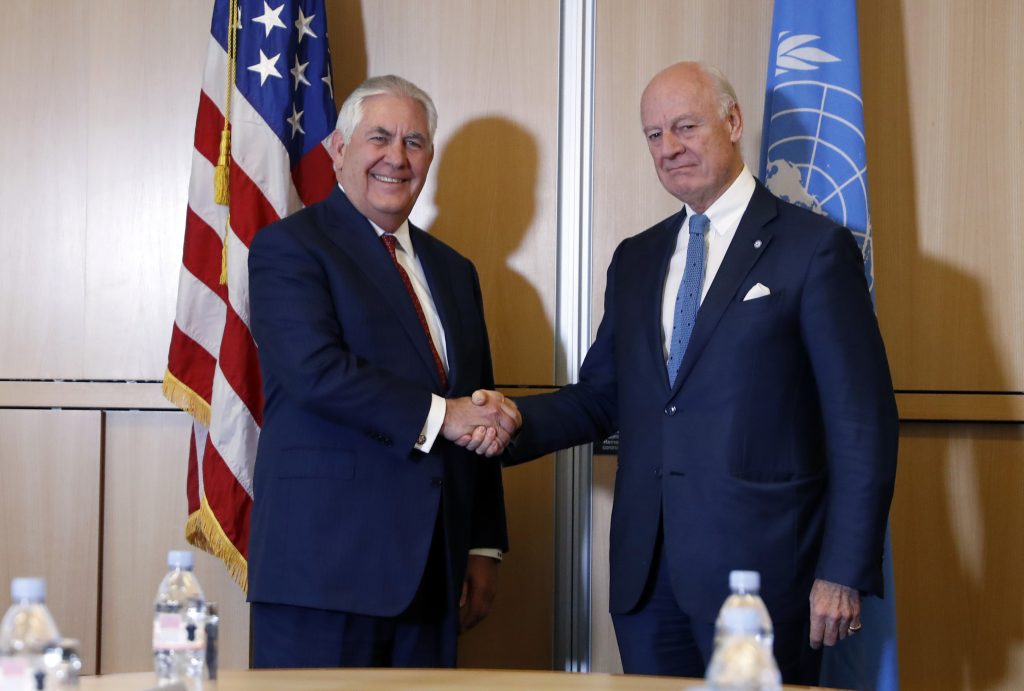 U.S. Secretary of State Rex Tillerson doubled down Thursday on Washington’s call for Syrian President Bashar Assad to leave power, looking past recent battlefield gains by his Russian-backed forces to insist that “the reign of the Assad family is coming to an end.”

Tillerson made the comments after what he called a “fruitful” meeting with U.N. Syria envoy Staffan de Mistura, who later announced plans to resume U.N.-mediated peace Syrian talks on Nov. 28. It will be the eighth such round under his mediation in Geneva since early 2016.

They come despite the fact that Assad’s forces have just in the past year recaptured Syria’s second-largest city and reached the key eastern city of Deir el-Zour, long under siege from IS fighters.

The top U.S. diplomat used the occasion to reiterate Washington’s longstanding, hardline position against Assad, which has been overshadowed of late by the Trump administration’s focus more on defeating the Islamic State group than on ousting the Syrian leader.

Officials in Damascus could not immediately be reached for comment.

Syria’s civil war has left at least 400,000 people dead and driven more than 11 million people from their homes, and the United States has been calling for Assad to go nearly from the start of the uprising against him more than 6-1/2 years ago.

But this time, facts on the ground are playing more in his favor than at any time in years.

“The United States wants a whole and unified Syria with no role for Bashar Assad in the government,” Tillerson told reporters after the meeting at the U.S. mission in Geneva. “The reign of the Assad family is coming to an end, and the only issue is how that should be brought about.”

“We do not believe there is a future for the Assad regime, the Assad family,” he said.

Tillerson made similar statements in April — before even greater territorial gains by Assad’s forces, prompting the Syrian leader to retort then that the diplomat had been “hallucinating.”

De Mistura announced the Nov. 28 date for the resumption of the intra-Syrian talks in an address by videoconference to the U.N. Security Council following the Tillerson meeting. He said it was time to move on the political track to end the conflict, saying, “Now is the moment of truth.”

“It would be a mistake by all of us if we think that time is on our side,” the special envoy said. “The best way to proceed requires indeed instead an intensified engagement among the key players in support of the Geneva parties.”

De Mistura said he would work to move into “real negotiation on a constitution and U.N.-supervised elections” while exploring the issue of governance and terrorism “in parallel” files. He expressed openness to any initiative that contributes to the U.N.-led process in Geneva.

Opposition delegations — which do not include Islamic State or other U.N.-designated terrorist groups — have never spoken directly to Syrian government envoys under de Mistura’s mediation.

Tillerson said any exit of Assad should be done through the Geneva process, but such a departure was not a “prerequisite” for that process to start.

In the past year, Assad’s Iran- and Russia-backed forces have recaptured Aleppo, Syria’s second-largest city, and last month they reached the eastern city of Deir el-Zour, which had long been under siege from IS fighters.

Assad’s forces and their allies have been battling IS just as U.S.-backed, Kurdish-led troops have pummeled the U.N.-designated terror group on another front: The Syrian Democratic Forces recently ousted IS from their so-called capital, Raqqa.

Speaking Thursday with a Russian delegation, Assad said the battlefield gains would pave the way for political progress, and that his government was ready to hasten the pace of national reconciliation.

He said his government would eventually address constitutional reforms and hold parliamentary elections.

Tillerson sought to play down any idea that the Syrian government’s advances might amount to a “triumph” for Iran, which has been a key backer of Assad.

“I see Iran as a hanger-on,” Tillerson said. “Iran has not been successful; the Russian government has been more successful. We have had success. I don’t think that Iran should be given credit for the defeat of ISIS in Syria.”

Tillerson met with de Mistura during a stop in Geneva on his way home from a trip to the Middle East and South Asia. Officials said Tillerson had initially planned to meet with officials from the U.N. refugee and migration agencies and the head of the International Committee of the Red Cross, but those meetings did not take place in his short visit in Geneva.