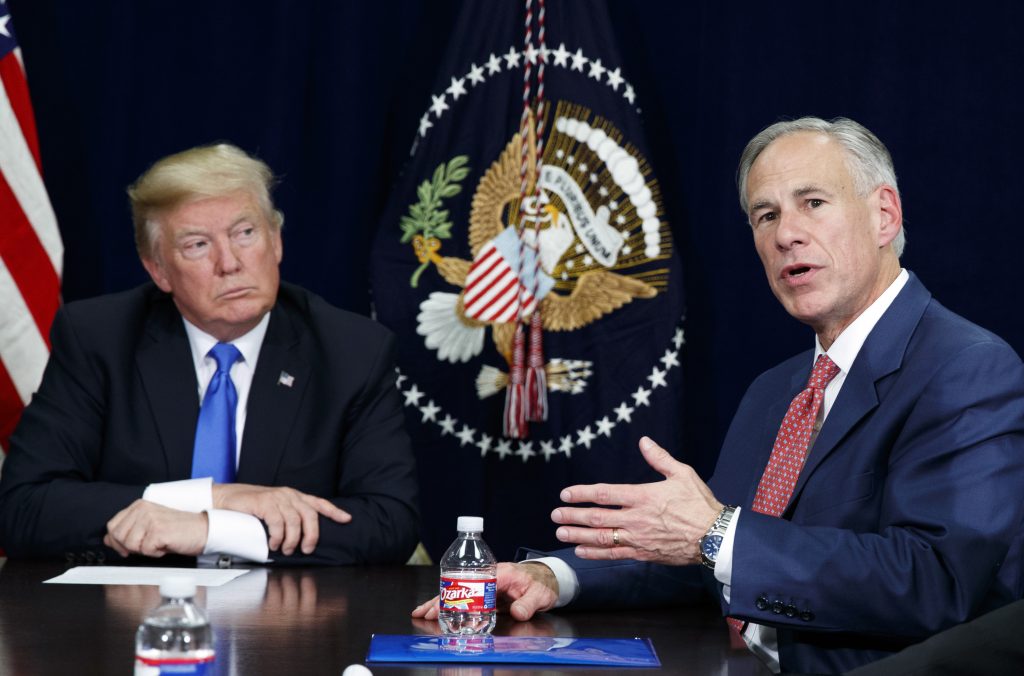 President Donald Trump pointed to “tremendous success” in Texas’ work to recover from Hurricane Harvey on Wednesday, suggesting that the federal government might serve as a partner in addressing long-term flood-mitigation plans in the state.

Arriving in Dallas ahead of a fundraising stop, Trump praised the work of Texas Gov. Greg Abbott, Lt. Gov. Dan Patrick and all of the emergency responders in the aftermath of the devastating hurricane that dumped record rainfall on areas around Houston and flooded thousands of homes as it lingered for days in late August.

“We’ve had a tremendous success in the state of Texas,” Trump said during a briefing with state and federal officials after landing at Dallas’ Love Field.

Abbott credited Trump for returning to Texas to assess recovery efforts. “He continues to show his commitment to helping Texans respond to the disaster of Hurricane Harvey and the flooding events. He has seen firsthand the challenges that Texans face.”

Trump noted that Texas has long been at risk for hurricanes and flooding and said the state and federal government should “look at the concept of a more permanent solution because you do get inundated and it’s been going on for decades.”

“Let’s take a look at the cost and see if it’s possible to do because that would save a lot of money into the future and it would also put a lot of people to work,” Trump said, without offering specific details on what that might entail.

The president, who earned his fortune in New York City real estate, spoke of the benefits of using greenboard in buildings because it is more water resistant than typical drywall. He described it as “a little more expensive than sheetrock” but might be useful in hurricane zones.

His briefing on hurricane recovery efforts came a day after the Senate sent him a $36.5 billion measure that will fund hurricane relief along with aid for Western states hard hit by wildfires. Trump is expected to sign the bill in the coming days.

The Senate’s passage of the disaster bill brought the total approved by Congress this fall to more than $50 billion. But more will be needed as the states and Puerto Rico continue to assess the damage.

More than 300,000 homes and businesses in Texas were damaged or destroyed when Harvey ravaged communities along the Texas Gulf coast, including Houston. Despite the emergency funds, state officials have said it could take years before some residents get the federal money they were promised for repairs.

“It is a painstaking process. Everyone is frustrated by it,” Bush said Tuesday. He said while FEMA has provided money for temporary housing, getting funding from the Housing and Urban Development Department for long-term repairs has been more complex.

Trump was expected to raise $4 million at fundraisers for Trump Victory, a joint fundraising committee between Trump’s campaign and the Republican National Committee. The event for 200 guests at Belo Mansion also featured RNC Chair Ronna McDaniel and some guests paid up to $100,000 to attend.