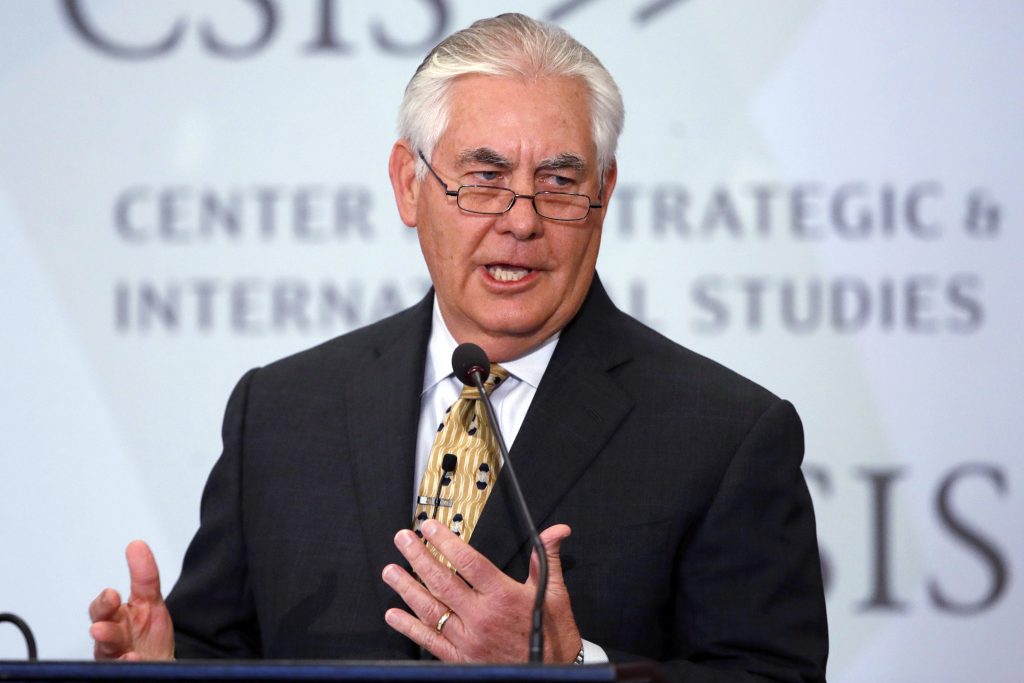 Tillerson said accounts of the suffering of the Rohingya are heartbreaking — and that if those reports are true, then “someone is going to be held to account for that.”

Tillerson, who is set to visit South Asia next week, is urging the Myanmar government to improve humanitarian access to the population in western Rakhine state.

Amnesty International has accused Myanmar’s security forces of killing hundreds of men, women and children during a systematic campaign to expel the Rohingya. More than 580,000 refugees have fled to neighboring Bangladesh since late August.

“We really hold the military leadership accountable for what’s happening,” Tillerson said at the Center for Strategic and International Studies, a Washington think tank. “What’s most important to us is that the world can’t just stand idly by and be witness to the atrocities that are being reported in that area.”

The deepening persecution of the Rohingya, a minority group denied citizenship in the majority Buddhist nation, has cast a long shadow over the U.S.-backed shift from decades of military rule toward democracy in the country also known as Burma.

Tillerson said it is a test of the “power-sharing government” between civilian leader Aung San Suu Kyi and the military. He said the U.S. has urged restraint by the military which launched its crackdown in response to attacks on security forces by Rohingya insurgents. The government and military have denied allegations, voiced by senior U.N. officials, of ethnic cleansing.

Tillerson demanded access to the strife-hit region to allow a “full accounting” of the circumstances of what has happened in Rakhine. He said a couple of U.S. diplomats have been able to visit.

“We’re encouraging access for the aid agencies, the Red Cross, the Red Crescent, the U.N. agencies, so we can at least address some of the most pressing humanitarian needs, but more important is so we can get a full understanding of what is going on,” Tillerson said.

The top U.S. diplomat did not elaborate on how perpetrators may be held to account, but said the U.S. would be engaged with the United Nations. Some U.S. lawmakers have called for the U.S. to apply targeted financial sanctions of its own on military officials complicit in abuses.

Amnesty said fleeing Rohingya had identified attackers as wearing uniforms of the Myanmar military’s Western Command, the 33rd Light Infantry Division and border police. The rights group called for an arms embargo on the country and criminal prosecution of the perpetrators.