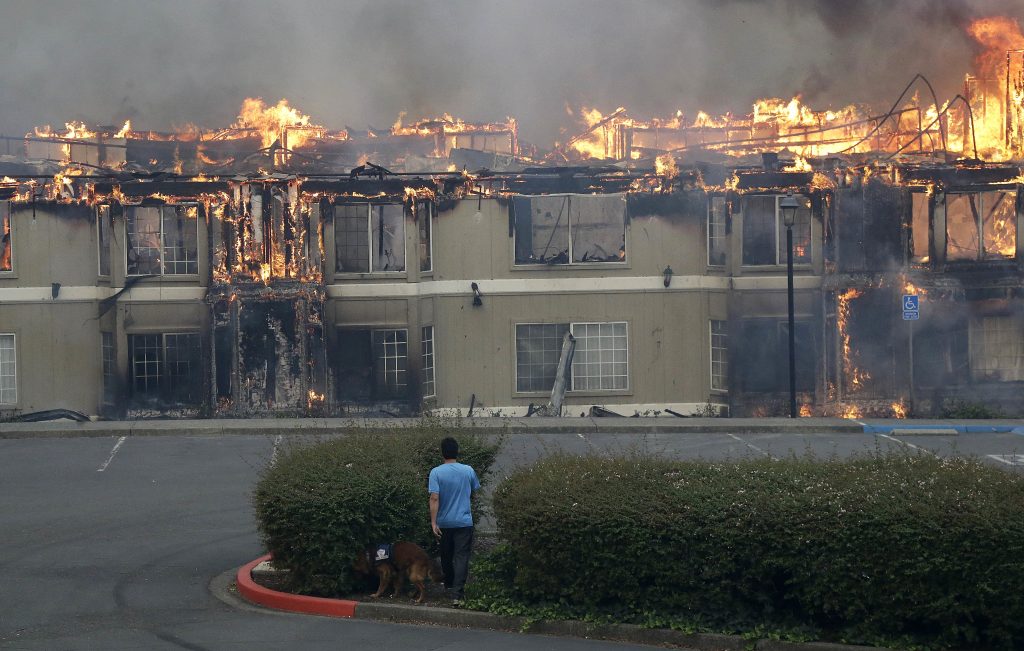 As he fled through the ember-stewn streets of his neighborhood in Santa Rosa, Jeff Okrepkie knew it was probably the last time he would see his home of the past five years standing.

His worst fears were confirmed Monday morning, when a friend sent him a photo of what was left: a smoldering heap of burnt metal and debris.

“We live in the valley, where it’s concrete and strip malls and hotels and supermarkets,” Okrepkie said. “The last thing you think is a forest fire is going to come and wipe us out.”

At least one person died and two were seriously injured, state fire officials said, but they warned that those estimates were bound to climb.

The flames were burning “at explosive rates” because of 50 mph winds, said Ken Pimlott, director of the California Department of Forestry and Fire Protection.

Fourteen large fires were burning north of San Francisco, prompting Gov. Jerry Brown to declare a state of emergency in Napa, Sonoma and Yuba counties. It was unusual to have so many fires take off at the same time, fire officials said, though October has generally been the most destructive time of year for California wildfires.

The ferocity of the flames forced authorities to focus primarily on getting people out safely, even if it meant abandoning structures to the fire. The fire area covered more than 100 square miles (160 square kilometers) over eight counties.

Some of the largest blazes were in Napa and Sonoma counties, home to dozens of wineries that attract tourists from around the world. Those fires sent smoke as far south as San Francisco, about 60 miles (96 kilometers) away.

Fires also burned in Yuba, Butte and Nevada counties — all north of the state capital.

The fires also damaged the Silverado Resort in Napa and a Hilton hotel in Santa Rosa, the largest city in the fire area, with a population of about 175,000.

Kim Hoe, a 33-year-old tech worker from Penang, Malaysia, was staying at the Hilton Sonoma Wine Country, which was gutted by flames. He said the power went out around 1 a.m., and he and his colleagues started packing up when someone knocked on the door and told them to run.

“We just had to run and run. It was full of smoke. We could barely breathe. It was dangerous,” Hoe said.

They returned in the morning to find the hotel had been destroyed along with most of their possessions. Hoe was relieved he had taken his passport and a few essential items.

Santa Rosa lost a Kmart, restaurants and an unknown number of businesses and homes. The blaze shut down schools and forced more than 200 patients at two city hospitals to evacuate.

Firefighters rushed to a state home for the severely disabled when flames reached one side of the center’s sprawling campus in the historic Sonoma County town of Glen Ellen. Emergency workers leapt from their cars to aid in the evacuation. Crews got the more than 200 patients from the threatened buildings, one firefighter said, as flames closed within a few dozen feet.

Residents throughout the area described a headlong flight to safety through smoke and flames.

Mike Turpen, 38, was at a bar in Glen Ellen early Monday when a stranger wearing a smoke mask ran in and yelled that there was a fire. Turpen raced home through flames in his Ford F-250.

“It was like Armageddon was on,” Turpen said. “Every branch of every tree was on fire.”

He woke later to find all his neighbors’ homes on fire, but stayed behind to try to defend his own rental home.

By late morning, Turpen, wearing shorts, a kerchief mask and goggles, was the last man standing for miles along one abandoned road. His yard and all those around him were burned, smoking and still flaming in a few spots. But his home was still standing.