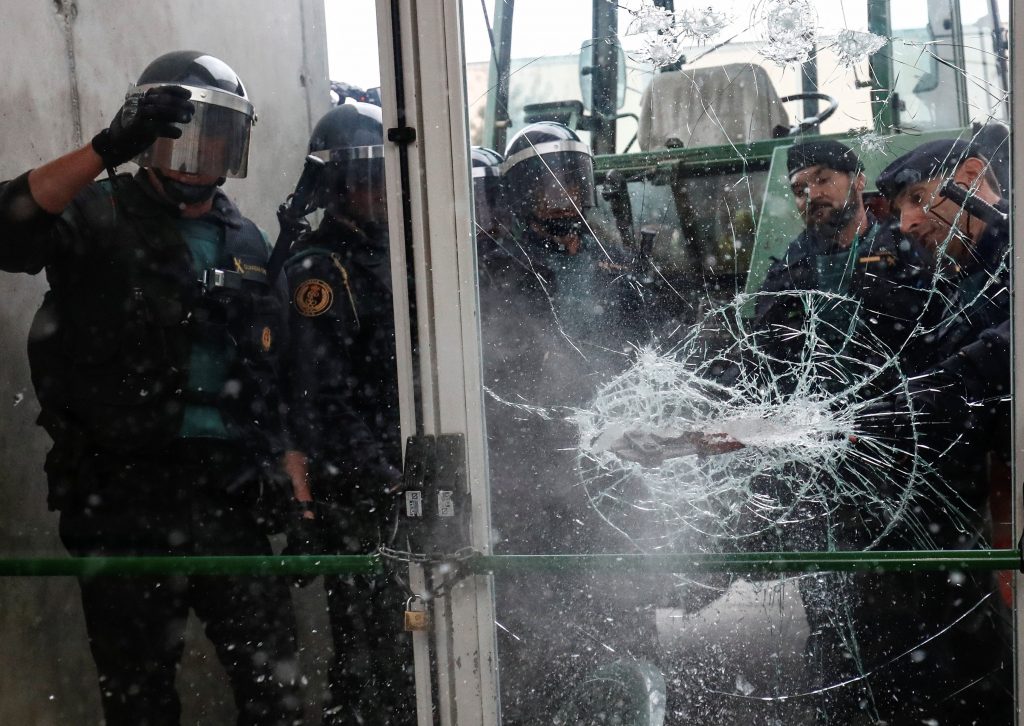 Spanish riot police burst into polling stations across Catalonia on Sunday, seizing ballot boxes and voting papers to prevent a banned referendum on a split from Spain in a show of force aimed at asserting Madrid’s authority over the rebel region.

Police hit people with batons, fired rubber bullets into crowds and forcibly removed would-be voters from polling stations in actions that were condemned internationally but described by the government as “proportionate.”

The referendum, declared illegal by Spain’s central government, has pitched the country into its deepest constitutional crisis in decades and deepened a centuries-old rift between Madrid and Barcelona.

Despite the police action, hundreds-strong queues of people formed in cities and villages throughout the region to cast their ballots.

“I’m so pleased because despite all the hurdles they’ve put up, I’ve managed to vote,” said Teresa, a 72-year-old pensioner in Barcelona who had stood in line for six hours to vote.

Polling stations’ opening hours would not be extended, a regional government spokesman said, but all those still queuing would be allowed to vote. It was still not known when the results would be announced, he said, adding that it had been a long day and it would be a long count.

Catalan leader Carles Puigdemont originally said that if the “yes” vote won, the Catalan government would declare independence within 48 hours; but regional leaders have since acknowledged that Madrid’s crackdown has undermined the vote.

However many vote, a “yes” result is likely, given that most of those who support independence are expected to cast ballots while most of those against it are not.

At one voting station, a man with a Spanish flag wrapped around him cast a vote while others cheered. Polls show around 40 percent of the wealthy northeastern region want independence from Spain, although a majority wanted a referendum on the issue.

The ballot will have no legal status as it has been blocked by Spain’s Constitutional Court, which ruled it at odds with the 1978 constitution that effectively restored democracy in Spain after the dictatorship of General Francisco Franco.

Markets have reacted cautiously but calmly to the situation so far, though credit rating agency S&P said on Friday that protracted tensions could hurt Spain’s economic outlook.

The region, with an economy greater than Portugal’s, accounts for about a fifth of Spain’s output.

In many places, people were not able to access the ballot boxes. In a town in Girona province where Catalan leader Puigdemont was due to vote, Civil Guard police smashed glass panels to open the door and search for ballot boxes.

Puigdemont voted in a different town in the province. He accused Spain of unjustified violence in stopping the vote and said it created a dreadful image of Spain.

Mauri, a 28-year-old sommelier, said police raided the polling station where he had voted in Barcelona province. Police formed a cordon outside the station and made a baton charge when the crowd advanced, he said.

“We went forward in peace with our hands raised to remove them from the street, and we came to a main road where there were around 20 police vans and there they fired rubber bullets to the ground and in the air,” he said.

Reuters was not in a position to corroborate his account.

Catalan officials said that over 460 people had been injured in the police crackdown, and the Spanish Interior Ministry said 12 police had been hurt.

Spain’s deputy prime minister said force used by the police had been proportionate.

“The absolute irresponsibility of the regional government has had to be met by the security forces of the state,” said Soraya Saenz de Santamaria.

The aim of the raids was to seize referendum material and not to target people wanting to vote, another senior government official said. However, the violent actions of the police on citizens was criticized internationally.

Nicola Sturgeon, the pro-independence leader of Scotland, which voted to remain part of the United Kingdom in a 2014 referendum, said she was concerned by the images she was seeing from Catalonia.

“Regardless of views on independence, we should all condemn the scenes being witnessed and call on Spain to change course before someone is seriously hurt,” she said on Twitter.

Differences were apparent in the conduct of the national Civil Guard and the regional police, Mossos. In Catalonia’s pro-independence heartland north of Barcelona, the Catalan force made little attempt to remove people from polling stations.

“This is a great opportunity. I’ve waited 80 years for this,” said 92-year-old Ramon Jordana, a former taxi driver waiting to vote in Sant Pere de Torello, a town in the foothills of the Pyrenees and a pro-independence bastion.