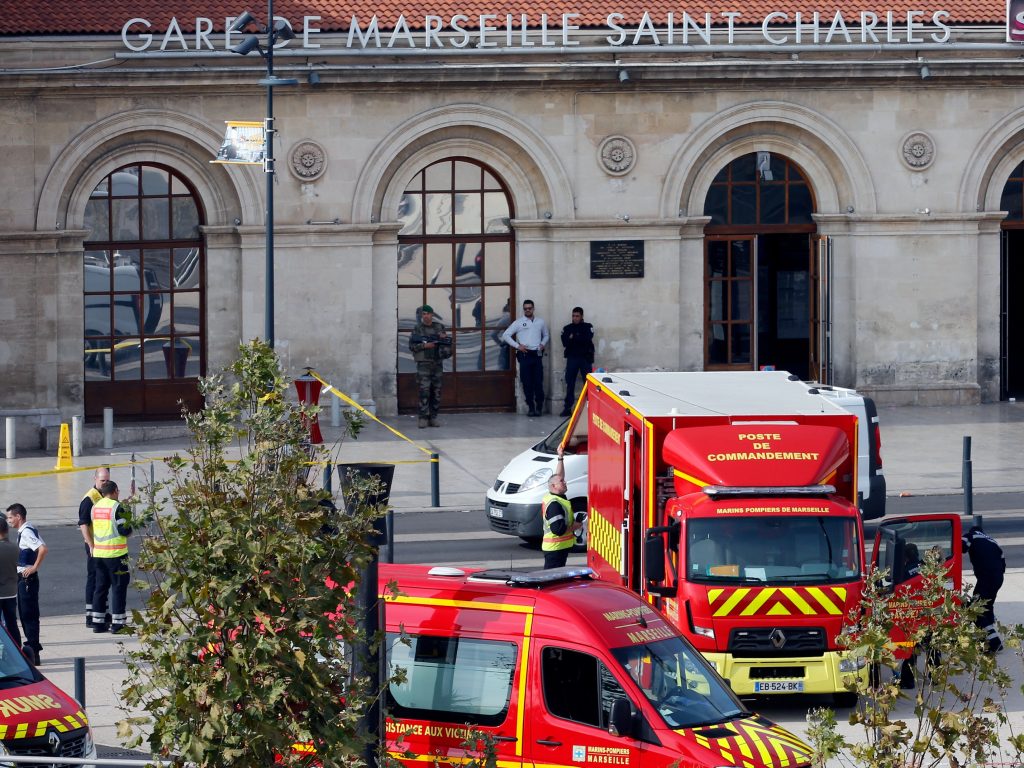 Two women were stabbed to death and their assailant shot dead by a soldier in the southern French port city of Marseilles on Sunday in what officials described as a “likely terrorist act.”

Police sources said the suspect had shouted “Alla-hu Akbar” (G-d is greatest) in Arabic as he attacked the women, aged 17 and 20, at Marseilles’ main railway station.

Two police sources said one had her throat slit while the other was stabbed in the chest and stomach.

The assailant was shot dead by a soldier from a military Sentinelle patrol, a force deployed across the country as part of a state of emergency declared after Islamist attacks that began almost two years ago.

“We have until now managed to avoid such dramatic incidents (in Marseilles). I think it was a terrorist attack and the individual who was killed seems to have had several identities,” Marseilles mayor Jean-Claude Gaudin told reporters.

Paris was rocked in 2015 by multiple attacks that killed 130 people. In 2016 a gunman drove a truck into a crowd celebrating Bastille Day in Nice, killing 86 people. Both of these attacks were claimed by Islamic State.

Other countries, including Britain, Germany and Belgium, have also suffered attacks by terrorists using knives, guns, explosives and driving vehicles at crowds.

Some 200 police officers cordoned off the area and all roads were closed to traffic.

A witness told Reuters she saw a man take out a knife from his sleeve and then stab a young girl and then a second woman, shouting what could have been “Alla-hu Akbar”.

Speaking in Marseilles, Interior Minister Gerard Collomb said the man had initially killed one woman and looked to be running away before returning to attack a second woman and then rush towards soldiers from the Sentinelle force who arrived on the scene quickly and shot him dead.

Two police sources said the attacker had been carrying a butcher’s knife, was around 30 years old and of North African appearance. One source said he was known to police for common law crimes, while another said digital analysis of fingerprints had come up with several aliases.

“This could be an act of terrorism, but we cannot confirm it fully at this stage,” Collomb told reporters.

French troops are part of a U.S.-led coalition fighting Islamic State in Syria and Iraq and has thousands of soldiers in West Africa fighting al Qaeda-linked militants, operations that have made these groups urge their followers to target France.

Security forces have increasingly been targeted by terrorists in knife attacks. A man wielding a knife attacked a soldier in a Paris metro station on Sept. 15.

President Emmanuel Macron said on Twitter he was “disgusted by this barbaric act” and praised the calmness and efficiency of security forces.

French lawmakers are due to vote on a much-criticized anti-terrorism law on Tuesday, which would see France come out of its state-of-emergency in November, although some of the powers would be enshrined into law.

The number of military personnel on the ground is also due to be reduced slightly, although the force is being adapted to make it more mobile and its movements less predictable.

“The presence of Sentinelle soldiers, their speed and efficiency ensured that the death count was not bigger,” police union official Stephane Battaglia told Reuters.