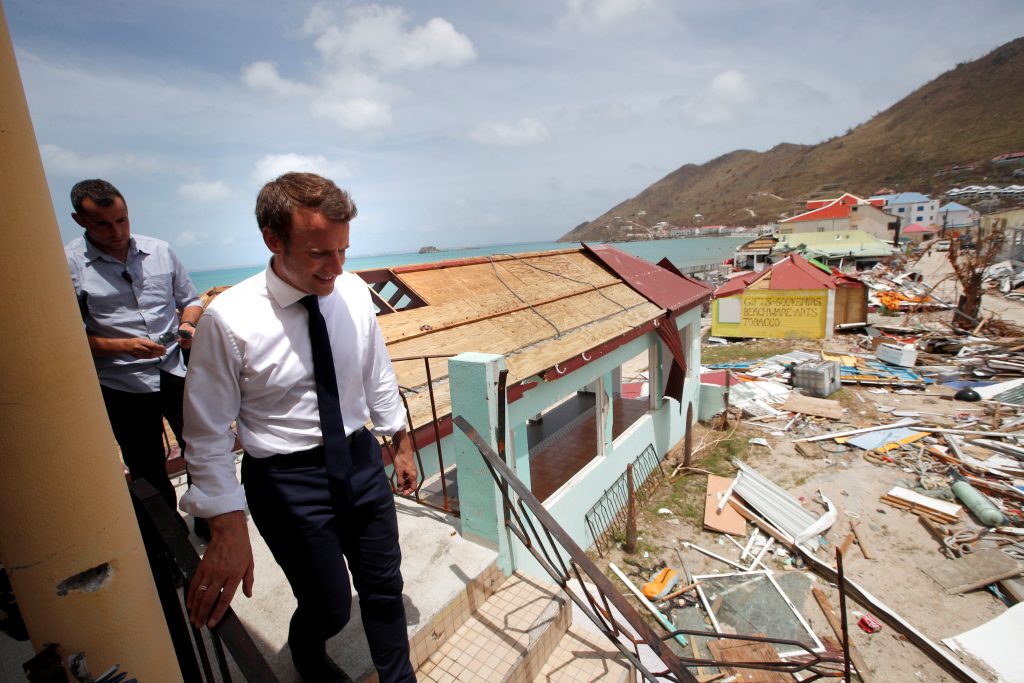 France’s president and the Dutch king visited Caribbean territories on Tuesday that were hammered by Hurricane Irma, trying to quell accusations by residents that European governments were unprepared, slow to react and sometimes even racist in their responses to the devastation.

The Dutch Red Cross said there were still more than 200 people listed as missing on St. Maarten, but with communications still extremely spotty a week after the storm hit, it wasn’t immediately clear how many were simply without cell service and unable to let friends and family know they had survived. Over 90 percent of buildings on the Dutch side of the island were damaged, and 1/3 of the buildings were destroyed, the agency said, adding they would use drones to better assess the damage.

Meanwhile, hundreds of people across the island shared by Dutch St. Maarten and French St. Martin were trying to rebuild the lives they had before the hurricane hit.

Dominga Tejera picked her way around fallen palm trees rotting in mud as she returned home after a nine-hour workday as a hospital janitor on the Caribbean island that only a week ago had seemed like paradise.

She collapsed into a small plastic chair that has served as a makeshift bed since Irma ripped the roof off her home as it pummeled St. Martin as a Category 5 storm.

“It’s sad when you come home to this,” she said as she began to cry. “You try to stay strong in public, but once inside, you break.”

French President Emmanuel Macron flew into Guadeloupe and was heading to hard-hit St. Martin to meet with residents. His plane brought water, food, tons of medicine and emergency equipment, doctors and recovery experts to an island demolished by the power of the Category 5 hurricane.

Macron said 11 people were killed in St. Martin, while another four people died on the Dutch side of the island, bringing the death toll in the Caribbean to at least 35.

At a news conference in the Pointe-a-Pitre airport before departing for St. Martin, Macron said the government’s “top priority” was to help island residents return to normal life.

But many on the island were struggling to maintain a semblance of the normality they had before Irma.

Adding to the stress of lack of food and shelter were reports of widespread looting by armed gangs.

As night fell on Monday, residents hurried inside, fearful of robbers roaming the streets and of the handful of men walking around yanking chains tied to aggressive dogs.

“We can’t sleep in peace because of the thieves,” said 48-year-old Yovanny Roque.

Hundreds of tourists were still trying to leave the island, with dozens lining up outside St. Maarten’s Princess Juliana Airport, where only five large letters of its name remained.

One passenger abandoned a Yorkshire terrier named Oliver, tied to a barricade with airport security tape, as some people were told they could not bring pets. The tiny dog was later rescued by a local resident who took pity on him.

Across the island, cars lay tossed upside down at 90-degree angles and on top of other cars. Large boats leaned sideways on dry land.

Dutch King Willem-Alexander, who arrived on Monday, said the scenes of devastation he witnessed on St. Maarten in the hurricane’s aftermath were the worst he had ever seen.

Still, he said he was encouraged to see residents already working together to rebuild the shattered capital, Philipsburg. He was scheduled to fly later Tuesday to the nearby Dutch islands of Saba and St. Eustatius, which also were hit by Irma, but suffered less damage than St. Maarten.

Among the dead were 10 killed in Cuba — the island’s worst hurricane death toll since 2005, when 16 died in Hurricane Dennis.

Havana was in recovery mode, with crews cleaning away thousands of fallen trees and electricity restored to a handful of neighborhoods.

To the east, in the Leeward Islands known as the playground for the rich and famous, governments came under criticism for failing to respond quickly to the hurricane, which flattened many towns and turned lush, green hills to brown stubble.

British Foreign Secretary Boris Johnson defended his government’s response to what he called an “unprecedented catastrophe” and promised to increase funding for the relief effort. Britain sent a navy ship and almost 500 troops to the British Virgin Islands, Anguilla and the Turks and Caicos islands.