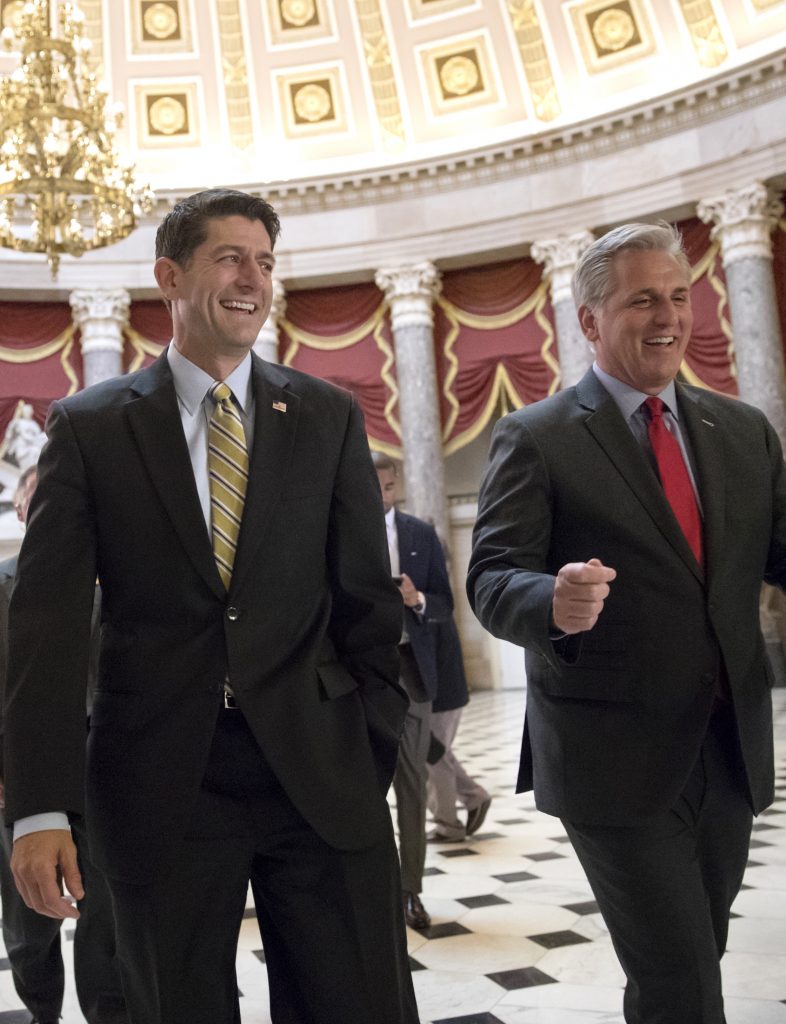 The House voted overwhelmingly on Friday to send a $15.3 billion disaster-aid package to President Donald Trump, overcoming conservative objections to linking the emergency legislation to a temporary increase in America’s borrowing authority. The legislation also keeps the government funded into December.

The 316-90 vote would refill depleted emergency accounts as Florida braces for the impact of Hurricane Irma this weekend and Texas picks up the pieces after the devastation of the Harvey storm. All 90 “no” votes were cast by Republicans.

It’s just the first installment of a federal aid package that could rival or exceed the $110 billion federal response after Hurricane Katrina, though future aid packages may be more difficult to pass. It also kicks budget decisions into December and forces another politically tough debt-limit vote next year.

White House budget director Mick Mulvaney, a former tea party congressman from South Carolina who took a hard line against debt increases during his years in the House, and Treasury Secretary Steven Mnuchin faced a rough time when they pitched the measure to House Republicans at a closed-door meeting held just before the vote. Republicans were stunned earlier this week when Trump agreed with Democratic leaders on the short-term debt increase over GOP objections.

Mnuchin elicited hisses when he told the meeting of House Republicans “vote for the debt ceiling for me,” said Rep. Mark Walker, R-N.C.

Rep. Ryan Costello, R-Pa., described a surreal scene with Mnuchin, a former Democratic donor, and Office of Management and Budget Director Mulvaney, who opposed clean debt ceiling hikes as a congressman, pressing Republicans to rally around the disaster-aid package.

Mulvaney defended the deal and Trump.

“It was absolutely the right thing to do,” Mulvaney said. “The president is a results-driven person, and right now he wants to see results on Hurricane Harvey, Hurricane Irma and tax reform. He saw an opportunity to work with Democrats on this particular issue at this particular time.”

Trump on Wednesday had cut a deal with Democratic leaders Sen. Chuck Schumer and Rep. Nancy Pelosi to increase the debt limit for three months, rather than the long-term approach preferred by the GOP leaders that would have gotten the issue fixed through next year’s midterms.

Conservatives disliked both options. Voting on the debt limit is politically toxic for Republicans, and the deal will make the GOP vote twice ahead of next year’s midterm elections.

Fiscal conservatives have clamored for deep cuts in spending in exchange for any increase in the government’s borrowing authority. The storm relief measure had widespread support, but the linkage with the debt ceiling left many Republicans frustrated.

But most in the GOP said they weren’t upset with Trump himself.

Democratic votes are invariably needed to increase the debt limit — and avert a potential market-quaking default on government obligations — and Schumer and Pelosi successfully pressed to waive the debt limit through Dec. 8. Democrats are cautious about working with Trump, but hold out hope for legislation on the budget, health care, and shielding young immigrants brought to this country illegally from deportation.

“It is heartening that the White House has finally after eight months realized that if you want to get something done, you’ve got to work with both sides and Democrats are a real force to be reckoned with,” said Rep. Gerry Connolly, D-Va.

Moderate GOP Rep. Peter King, R-N.Y., said he’s been encouraging Trump to find ways to work with the Democrats. He was at a Thursday meeting in the White House with lawmakers when the president asked him whether he thought the bipartisan deal was good.

Late Wednesday, Senate Majority Leader Mitch McConnell, R-Ky., added $7.4 billion in rebuilding funding to Trump’s $7.9 billion request to deal with the immediate emergency in Texas and parts of Louisiana. The Senate passed the measure Thursday by an 80-17 vote.